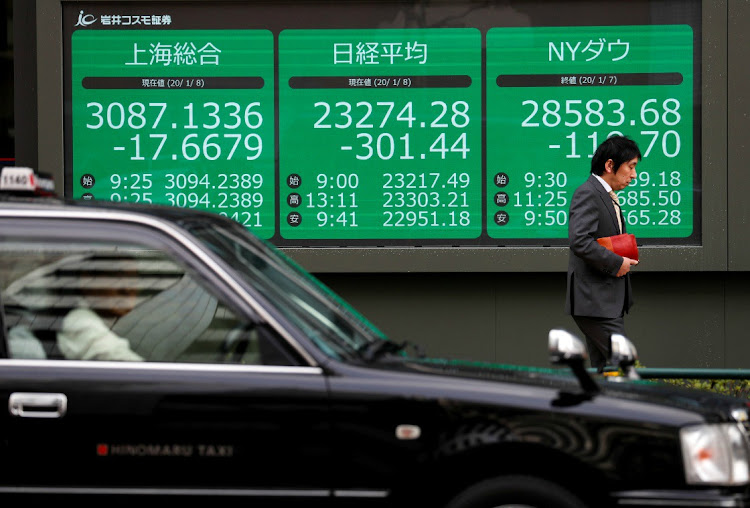 A man walks past an electronic display showing Asian markets indices outside a brokerage in Tokyo. Picture: REUTERS

Hong Kong/New York — Asian shares slipped on Tuesday, brushing off a firmer Wall Street lead as China’s post-holiday rally cooled, though a buoyant tech sector and fresh optimism about US stimulus are expected to continue to support sentiment.

MSCI’s broadest index of Asia-Pacific shares outside Japan dipped into negative territory in the Asian session, down 0.09%.

The morning session of Hong Kong’s Hang Seng index was cancelled as the city faced a typhoon warning.

Despite the volatility across the region on Tuesday, Surich Asset Management founder Simon Yuen said he was confident Asian stock markets would retain positive fundamentals after the US election on November 3.

“We expect Asian equities should outperform the global equity market in next two to three years because if Joe Biden is elected the US shall have an easier relationship with China,” Yuen said. “On the other hand, if Donald Trump is elected, China will promote demand in terms of consumer spending to increase their dominance over the world.”

Australian S&P/ASX 200 was the region’s only bright spot, up 1% on firmer bank stocks and despite a sell-down in major coal names after reports China could look to ban Australian imports of the commodity.

On Wall Street, the Nasdaq Composite on Monday staged its biggest one-day rally in a month, jumping 2.56%. The Dow Jones Industrial Average rose 0.88% and the S&P 500 gained 1.64%.

The US dollar was pinned near a three-week low and gold, another safe-haven asset, stayed below a three-week high, slapped by investor demand for risk.

The dollar index gained 0.15%, reversing an earlier fall in the US session.

Wall Street gains on Monday were driven by Apple, which surged 6.4% ahead of an expected debut of its latest iPhone on Tuesday, while Amazon rallied 4.8% ahead of its Prime Day shopping event this week.

Investors await US bank results with JPMorgan and Citigroup kicking off third-quarter earnings season on Tuesday. Goldman Sachs, Bank of America and Wells Fargo and Morgan Stanley report later in the week.

Bets that more US stimulus was in the offing came despite signs that talks in Washington had stalled again, leading the Trump administration to call on Congress to pass a less ambitious coronavirus relief bill.

US Senate Republicans said they will go along with what the president wants in coronavirus relief legislation, a White House spokesperson said on Monday.

Beijing’s tensions with Washington are also in view after the White House moved forward with three sales of advanced weaponry to Taiwan, sources familiar with the situation said on Monday. The move in the run-up to the US election is likely to anger China, which considers Taiwan a renegade province.

Investors are also closely watching the global resurgence in coronavirus cases after British Prime Minister Boris Johnson on Monday announced a new system of restrictions on parts of England. MPs will vote on the move on Tuesday.