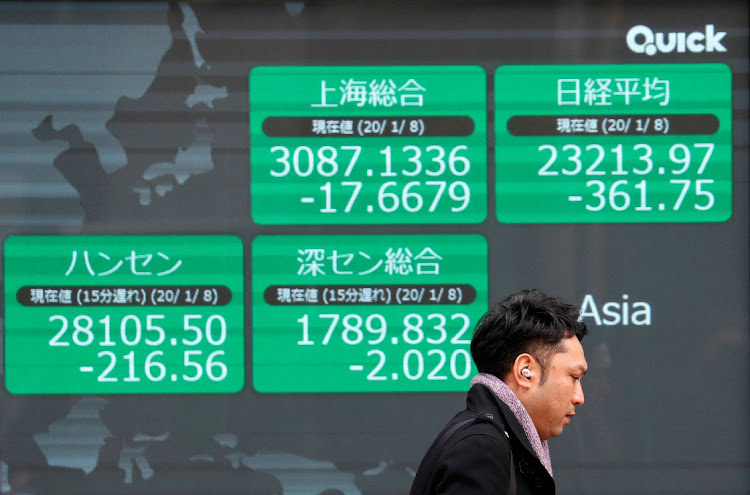 A man walks past an electronic display showing Asian markets indices outside a brokerage in Tokyo on January 8 2020. Picture: REUTERS/Issei Kato

Sydney — A gauge of Asian shares climbed to a one-month high on Thursday, as renewed hopes for more US stimulus helped restore investor confidence with markets now pricing in a Democratic victory during elections in November.

MSCI’s broadest index of Asia-Pacific shares outside Japan rose 0.3% for its fourth straight session of gains to a level not seen since early September.

Australia’s benchmark index jumped 1.1% to a one-month high helped by a larger-than-expected fiscal stimulus announced in the federal budget on Tuesday night.

Globally, risk assets have rallied since mid-March on a flood of central bank and government support for economies reeling from coronavirus-induced lockdowns the world over. Expectations of more aggressive easing have further boosted sentiment.

“It’s another good day for risk and equities have powered up,” said Pepperstone strategist Chris Weston in Melbourne.

“Some talk of fiscal has been in play again, but this has become tiresome and the markets don’t need a reason to rally, they just don’t need to hear negative news. So, in the absence of any, we see equities flying and US Treasuries offered.”

Weston expects more monetary policy stimulus from the US Federal Reserve before Christmas if the fiscal package comes in too small or too late.

Further, new polls show Democratic candidate Joe Biden in a firm lead against Trump ahead of the November elections. Investors see such an outcome making the passage of a new stimulus bill more likely.

All eyes will now be on US employment data due later in the day, which will likely show the recovery in the world’s largest economy losing steam.

Economists predict a decline in jobless claims, however, continued claims are expected to remain firmly above 10-million.

In currencies, the dollar was barely moved against the yen at 106. The euro was unchanged too at $1.1764.

The biggest mover was the New Zealand dollar, which slipped 0.4% after senior officials at the country’s central bank signalled further monetary policy easing, including negative rates, was just around the corner.

Donald Trump’s call for targeted stimulus has nudged up sentiment, with the presidential race remaining a key driver of volatility
Markets
11 months ago

World shares bounce back as US stimulus expected whoever wins election

World shares bounce back as US stimulus expected whoever wins election