The US president cancelled talks with Democrats in a Tweet saying negotiations would stop until after the election, when he promised a major stimulus bill 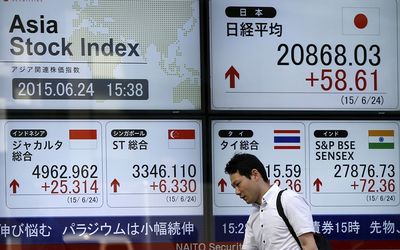 Trump cancelled talks with Democrats in a Tweet saying that negotiations would stop until after the election, when he promised a major stimulus bill.

That sent Wall Street tumbling and safe assets such as the dollar and bonds higher. Investors in Asia, however, seemed less rattled, holding a view that stimulus would be delayed rather than derailed.

MSCI’s broadest index of Asia-Pacific shares outside Japan crept 0.2% higher to a fresh two-week peak, led by a 0.8% gain in Australia where an expansionary budget lifted stocks.

S&P 500 futures wobbled either side of flat, finding some support from Trump tweets seeming to promise backing for individual pieces of fiscal stimulus. The dollar was steady at its highest level for the week so far. Oil prices slid and the strong dollar squashed gold to a one-week low.

“There are a couple of ways we still get stimulus, but none of them occur before the election now,” said ING's chief economist in Asia, Rob Carnell, since both contenders are promising it.

“One way or another we're going to get some stimulus, it's just we're not going to get it now — so we'll tread water for a bit.”

China’s stock, bond and currency markets are closed for holidays until October 9.

The end to US stimulus talks comes as a few wobbles hit the world’s coronavirus recovery.

US hiring is slowing and on Tuesday US Federal Reserve Chair Jerome Powell warned of the risks if authorities did too little to support the economic rebound.

“The risks of overdoing it seem, for now, to be smaller,” Powell said. “Even if policy actions ultimately prove to be greater than needed, they will not go to waste.”

US markets, which have rallied for a few weeks on hopes of a breakthrough in stimulus talks, tanked on Tuesday. The Dow fell 1.3%, the S&P 500 dropped 1.4% and the Nasdaq fell 1.6%.

Counting down the minutes

The flight to safety overnight partially unwound what had been the steepest US bond market sell-off in about a month. The yield on benchmark 10-year US government debt fell two basis points to 0.7403%.

Currency traders also bought back dollars, pushing the dollar index to its highest since late last week and leaving both foreign exchange and bond markets delicately poised ahead of the release of Fed minutes at 6pm GMT.

Investors are watching for clues as to how Fed members are thinking about the central bank's new and more accommodative approach to inflation and what they might do to boost it.

“We think the risks lie more in the extent of disagreement within the federal open market committee (FOMC) than on the any potential dovish surprise,” said Standard Chartered Bank's head of forex research, Steve Englander.

Jitters remained in commodity markets, with oil futures giving up some of their recent gains made amid supply concerns.

A larger-than-expected build-up in US crude stocks had West Texas Intermediate futures down about 2% to $39.91 a barrel. Brent crude futures fell 1.5% to $42.01 a barrel.

Spot gold was steady at $1,879/oz after being whacked by a rising dollar overnight.

World markets near a two-week high as Trump leaves hospital

World markets near a two-week high as Trump leaves hospital