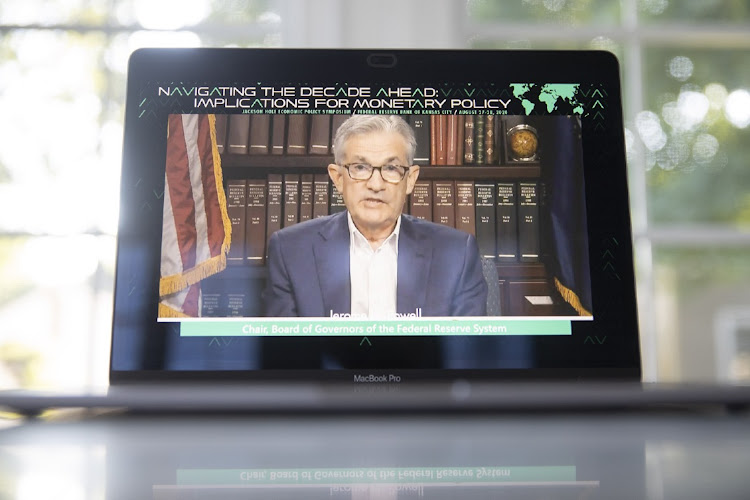 Washington — Federal Reserve chair Jerome Powell announced a new approach to monetary policy on Thursday that takes a more relaxed stance on inflation and on its view of how low US unemployment can go.

Powell said the Fed would seek inflation that averages 2% over time — a step that implies allowing for price pressures to overshoot after periods of weakness. Its shift on maximum employment will allow labour-market gains to run more broadly.

“Our revised statement emphasises that maximum employment is a broad-based and inclusive goal,” Powell said in a speech delivered virtually for the central bank’s annual policy symposium traditionally held in Jackson Hole, Wyoming. “This change reflects our appreciation for the benefits of a strong labour market, particularly for many in low- and moderate-income communities.”

During the longest US economic expansion on record until the pandemic hit earlier this year, many groups benefited — including minorities and women — in their ability to find work. With unrest breaking out across the US over racial inequality, questions about how the Fed’s policy helps communities broadly have been raised.

The markets took Powell’s remarks as another indication that the Fed is in no rush to raise interest rates. Bonds and US stocks rose along with gold prices.

Regarding price pressures, the document says the committee will target “inflation that averages 2% over time” and will aim to bring inflation above the 2% target following periods when inflation runs below that level.

The shift Powell announced represents the product of an unprecedented review of the Fed’s strategies, tools and approach to communications that began in early 2019.

Since the central bank officially set its inflation target at 2% in 2012, the Fed’s preferred measure of price increases has consistently fallen short of that objective, averaging just 1.4%.

Low inflation contributes to low interest rates, reducing the Fed’s ability to fight off economic downturns and potentially making them deeper and longer. Powell noted a risk, saying that “if excessive inflationary pressures were to build or inflation expectations were to ratchet above levels consistent with our goal,” the central bank wouldn’t hesitate to act.

He called the changes “a robust updating of our monetary policy framework”.

Carney was a UN special envoy on climate change and will now concentrate on environmental, social and governance investing
Companies
8 months ago

Investors are focused on Jackson Hole, where Jerome Powell is expected to outline more stimulus measures
Markets
8 months ago
Next Article

Gold dips as investors cash in ahead of Fed address

Gold dips as investors cash in ahead of Fed address