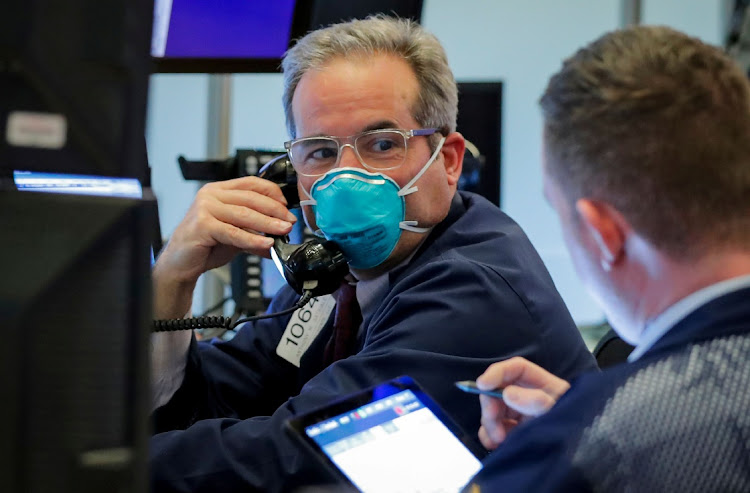 A trader wears a face mask on the floor of the New York Stock Exchange in New York, the US. Picture: REUTERS/LUCAS JACKSON

London — Gold soared to a record high on worsening ties between China and the US, a weakening dollar and ultra-low interest rates on Monday, while stock markets looked uncertain before a corporate earnings deluge.

Europe’s equity markets saw a subdued start, perhaps still hurting after their first weekly drop in four and as the euro’s fastest gains since early 2016 took it through $1.17, but it was the precious metals surge that dominated.

A lot of factors were in play for markets, said Shafali Sachdev, the head of forex Asia at BNP Paribas Wealth Management in Singapore, from US-China tension to a second wave of coronavirus outbreaks.

“If you look at the fact that the dollar’s been higher yielding than many other currencies for quite a while, and with some of the benefits of that being eroded ... and also the continued demand for a safe haven, it all plays into gold’s strengthening,” she said.

“And at this point there doesn’t seem any obvious factor that could help the trend to draw to a close.”

European stocks cut some of their early losses after data from Germany showed an improvement in business morale, but it was going to be an effort to get out of the red.

Travel and leisure stocks were down 3%, with UK-based airlines and tour operators such as TUI, easyJet, British Airways owner IAG falling 8% and to 13.5% after Britain imposed a 14-day quarantine on travellers returning from Spain, where coronavirus cases are rising again.

Asia was also choppy. A 10% rally in Taiwanese chipmaker TSMC helped some other tech shares across the region, after shares in US rival Intel plunged by more than 16% on Friday.

“Chipmaking machine makers may see reduced demand from Intel for now, but as the jump in TSMC shows, markets are not pessimistic about the semiconductor industry,” said Yasuo Imanaka, chief analyst at Rakuten Securities.

Elsewhere, mainland Chinese shares gave up most of their early gains, with the CSI300 index closing up just 0.2%, after steep losses on Friday.

Global shares had lost steam late last week after Washington ordered China’s consulate in Houston to close, prompting Beijing to close the US consulate in Chengdu.

US secretary of state Mike Pompeo said Washington and its allies must use “more creative and assertive ways” to press the Chinese Communist Party to change its ways.

One key for markets this week will be earnings releases from the world’s main tech companies. Facebook reports on Wednesday, and Amazon, Apple and Google are all due.

The hope for a quick US economic recovery are fading as coronavirus infections showed few signs of slowing.

That means the economy could capitulate without fresh support from the government, with some of the earlier steps such as enhanced jobless benefits due to expire in July.

Investors hope the US Congress will agree on a deal before its summer break. US treasury secretary Steve Mnuchin said the package will contain extended unemployment benefits with 70% “wage replacement” — but there are some sticking points.

Democrats, who control the House of Representatives, want enhanced unemployment benefits of $600 a week to be extended and look to much bigger stimulus compared with the Republicans’ $1-trillion plan.

The concern about the US economic outlook have also started to weigh on the dollar. The dollar index dropped 0.5% to its lowest level in nearly two years.

The euro gained 0.5% to $1.1711, hitting a 22-month high, after a European agreement on a recovery fund last week supported sentiment towards the common currency.

Oil prices were capped on the worry about the worsening China-US relations.

“The pressure is building on politicians to provide more stimulus as the Covid-19 outbreak continues across the Americas, with a second wave unfolding in Europe and Asia,” said Jeroen Blokland, portfolio manager at Robeco.

Oil slips on rise in coronavirus cases and US-China standoff

A lot of funds are moving into bullion due to weaker greenback, analyst says
Markets
8 months ago

Rand likely to bounce back from three-day losing streak