Market heavyweight Naspers and miners ensured a poor start to the week for the local bourse, although banks rose 1.5% 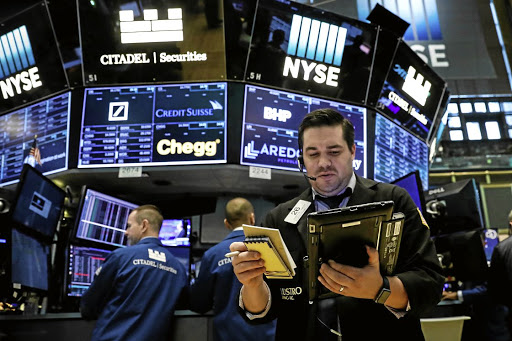 The JSE slipped on Monday, despite gains by banks and financial stocks, with miners leading the losses.

The Dow closed 1% higher on Friday due to a strong performance from banks, as corporate earnings season in the US kicked off. Company results in that country are expected to be the dominant issue in the markets this week, with trade expected to be subdued a little by the forthcoming public holidays.

Global sentiment was somewhat positive on Monday, boosted by upbeat Chinese trade data, and reports that the US and China are closing in on a trade deal.

The major local and international data releases take place on Wednesday, with domestic retail sales numbers for February due, along with consumer inflation for March. China will release first-quarter GDP figures.

Sibanye-Stillwater fell 3.38% to R13.43, extending its 14.98% loss last week. The miner, which has endured a five-month strike at its gold operations, raised nearly R2bn from shareholders last week and a similar amount in a forward gold-sale agreement with Citibank, as it prepares for a possible strike at its platinum operations later in 2019.

MTN added 0.51% to R98. On Friday, its associate Jumia Technologies jumped 75% on the New York Stock Exchange upon its listing. MTN owns 30% of Jumia.

Gemfields closed flat at R1.75. It said earlier it would pay a special dividend totalling $24.6m to its shareholders, funded by the sale of its remaining minority stake in Jupiter mines.

EOH surged 14.04% to R13, ahead of its interim results to end-January on Tuesday. The company warned on Friday it would post a headline loss of R9.73 per share, due to major impairments. This had initially sent the company's share price sharply lower on Friday, although it then recovered to end the day 1.6% higher.

The local currency is expected to hold steady this week due to the long weekend, while there are no major data releases on Monday
Markets
2 years ago

Oil is weaker, although concern about supply issues provides support