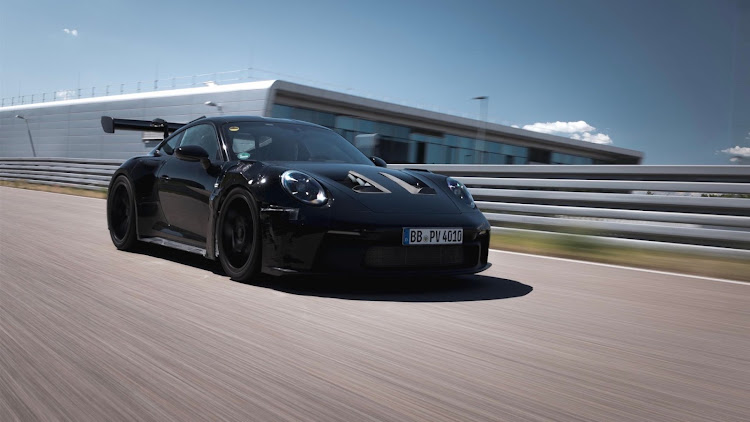 The new Porsche 911 GT3 RS will debut on August 17 in a live broadcast. Picture: SUPPLIED

Porsche has announced that the newest GT3 RS will make its debut on August 17. The RS is the most hard-core and sport-orientated version of Porsche’s top naturally aspirated 911, the GT3.

RS stands for Renn Sport (racing) and though the GT3 isn’t the most powerful 911 (that accolade goes to the turbocharged GT2 RS), it’s the most purist and track-focused, with a signature big wing that in the outgoing generation musters up 144kg of downforce. The amalgamation of those letters translates to a ferocious animal for both road and track.

Based on the 992-series Porsche GT3 that arrived in SA in March 2022, the new RS will have more power and acceleration, and is more optimised for track use than its predecessors.

It retains the high-revving 4.0l boxer engine, according to Andreas Preuninger, director of Porsche’s GT model line, who also says refinements were focused primarily on aerodynamics and chassis.

Porsche hasn’t announced power figures, but expect an improvement over the 383kW and 470Nm of the outgoing GT3 RS, which boasted a 0-100km/h time of 3.6 seconds and a top speed of 312km/h.

The digital world premiere of the new Porsche 911 GT3 RS will be broadcast on newstv.porsche.com on August 17 at 5pm CEST.

With racing genes and a soulful sound, new car is 17 secs quicker around Nurburgring than old GT3
Life
1 year ago