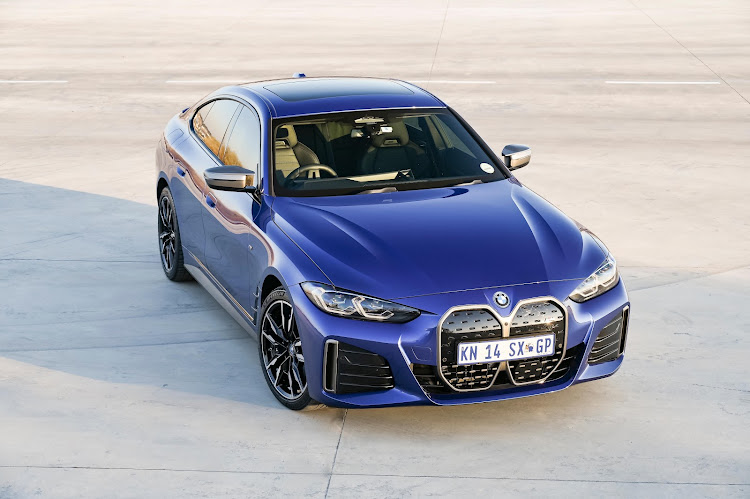 The i4 M50 has M4-like performance and a 510km range.Picture: SUPPLIED.

While local electric vehicle (EV) sales are still at a trickle, dampened to no small degree by Eskom's woes, there is a growing number of battery-powered cars being launched in SA from brands including BMW, Porsche, Jaguar, Audi, Mini and Mercedes-Benz.

BMW SA, which was one of the pioneers of electric motoring in this country with its i3, bolstered its EV range with the launch of the new i4 and iX3 this week.

The i3, which has been discontinued globally, was a city car with a short range that served early adopters seeking zero-emission transport. BMW's modern EVs have far more performance and range than the quirky i3, which heads into retirement after nine years and more than 200,000 units produced.

The luxurious iX was recently launched here as the Bavarian firm’s flagship EV range available in two models, but its prices of R1.7m and R2.25m placed it out of reach of all but the most affluent.

However, BMW SA’s latest battery-powered cars bring electric motoring into the affordability realms of more buyers, if not quite the mass market, with the i4 priced at R1.6m and the iX3 at R1.29m.

These two cars mark the next major step in BMW's transformation towards a 50% global share of fully electric vehicle sales in 2030.

Here’s a closer look at them:

The electric version of the 4 Series gran coupe, the i4 combines spaciousness with sporting agility and a comfortable ride. It is the first EV from BMW's M division.

It is available in a single high-performance model called the M50, which has the claim to fame of matching the rear-wheel drive BMW M4 in terms of accelerative performance, equalling the 3.9-second 0-100km/h sprint of its petrol-powered stablemate, though the electric car offers a lower 225km/h top speed.

Two electric motors, one at the front axle and one at the rear, provide 400kW of power and 795Nm in an all-wheel drive car that claims a range of up to 510km on a single charge.

The i4 is impressively quick, delivering instant and step-free power at the touch of the throttle. It also has a smooth ride combined with nimble and pinned-down handling. A centre of gravity 53mm lower than the BMW 3 Series sedan, even weight distribution and a torsionally stiff body provide the recipe for sporting ability and great long-distance comfort.

While the i4 is no M4 in terms of visceral feel, its acoustic flair is heightened by an optionally available IconicSounds feature that provides a deep and throaty hum the driver can activate at a button press. 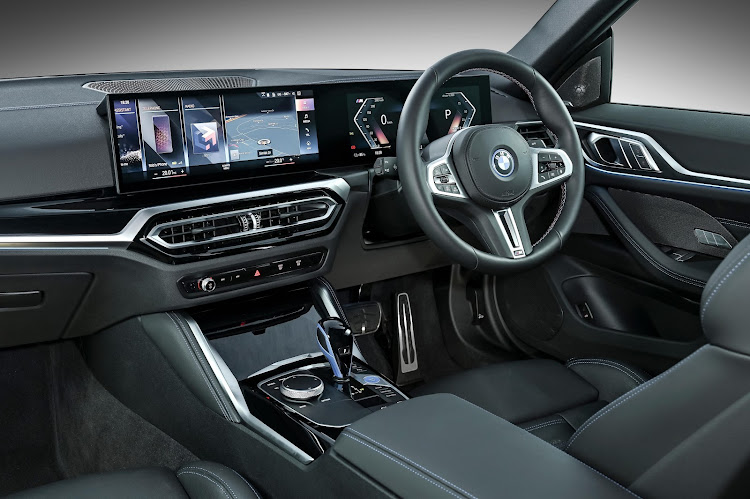 The i4 has a curved 14.9-inch display touchscreen powered by the new BMW Operating System 8 and a 12.3-inch instrument panel. Picture: SUPPLIED

The car has an 83.9kWh high-voltage battery. On a 200kW DC charger the i4 will be able to be juiced up with 140km of range in just 10 minutes, says BMW, though such chargers aren't yet available on the network. At the moment you can expect to charge the car up to 80% in about an hour.

Under the i4's electronic tailgate is a generous 470-litre boot that expands to 1,290 litres with the rear seats flipped down. The car is also able to tow a 1,600kg trailer load.

Inside, the i4 has a curved 14.9-inch display touchscreen powered by the new BMW Operating System 8 and a 12.3-inch instrument panel.

Assistance functions fitted as standard or available as options include active cruise control and lane-keeping assist. 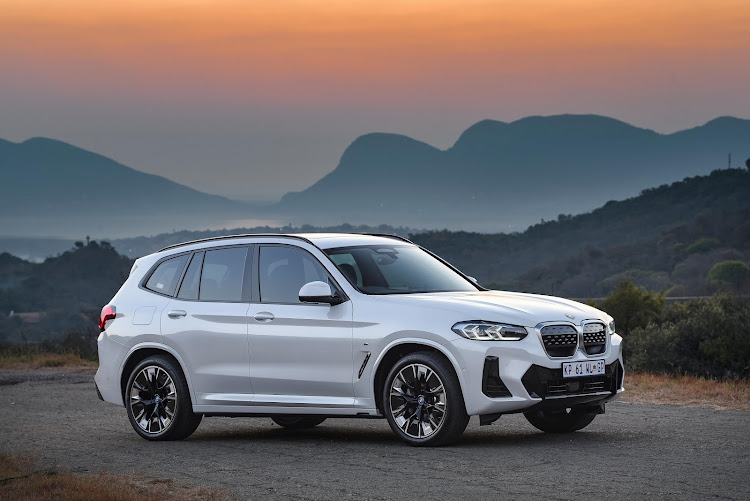 The iX3 boasts a range of 460km and a top speed electronically limited to 180km/h. Picture: SUPPLIED

The imported iX3 is the electric version of the X3 SUV which is built in petrol and diesel versions at BMW's Rosslyn plant near Pretoria.

Equipped with a single 210kW electric motor at the rear wheels, it boasts a range of 460km and a top speed electronically limited to 180km/h. With the ability to sprint from 0-100km/h in 6.8 seconds, it is pitched between the X3 20d and X3 30d in terms of performance and is priced about the same as a 30d equipped with a similar level of features.

The 80kWh battery has a DC fast-charging rate of up to 150kW and a 10-minute fast charge adds about 100km of range.

The iX3 has the same roomy interior as its combustion-engined counterparts and a fully digital screen with a 12.3-inch instrument cluster. There are BMW i Blue accents on the gear selector lever, start/stop button and steering wheel to visually proclaim its electric status.

While not as brutally quick as the i4, the electric X3 feels satisfyingly spirited when you unleash its potential. The power delivery is enjoyably instant and lag-free, and the SUV rides over bumps with impressively polished finesse.

All electric BMWs in SA are sold with a Wallbox home charger and free charging at BMW dealers.

They have the same two-year/unlimited distance warranties as petrol- and diesel-powered BMWs. The lithium-ion batteries have eight-year warranties and can be used as home generators once their motoring life is up. One car battery pack could power an average home for about three days, says BMW.

EVs remain an expensive luxury, but improved range and charging times are making them more practical to own
Life
5 months ago