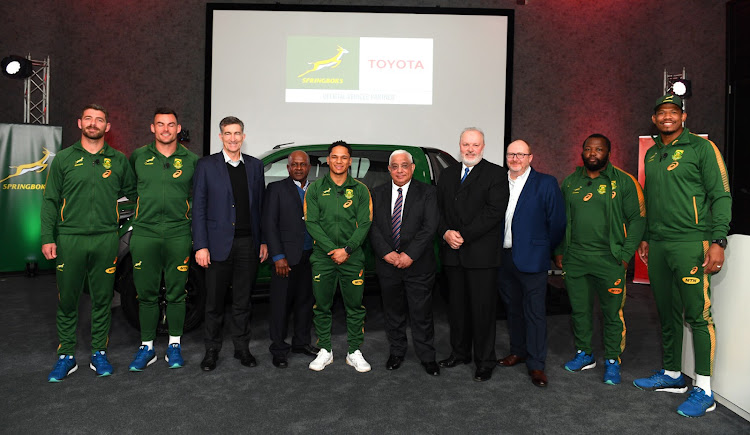 Toyota SA big-wigs CEO Andrew Kirby (third from left) with some of his management team pose with members of the Bok squad. Picture: SUPPLIED

Toyota SA Motors has announced a three-year partnership with the Springboks, replacing Jaguar Land Rover whose contract ended in January.

A Jaguar Land Rover spokesperson said the partnership with the Springboks wasn't renewed because of a lack of cars to supply to the team as a result of the ongoing worldwide shortage of semiconductors.

However its sponsorship with individual players such as Bongi Mbonambi, Lukhanyo Am and Dwayne Vermeulen will continue.

“It goes without saying that Toyota has a strong bond with SA rugby. The future of SA rugby is bright both domestically and internationally and we are honoured to drive this new chapter in SA’s sporting journey,” said Leon Theron, senior vice-president of sales and marketing at Toyota SA.

Jurie Roux, CEO of SA Rugby said: “For many years Toyota has been one of the most trusted motoring brands in SA, and to have them on board as one of our new sponsors is a great moment. We are living in particularly challenging times, but it speaks volumes of the value of the Springbok brand that we are still able to welcome new partners.”

Theron added: “When the chance to get involved with the Springboks came about, it was a no-brainer for us. Toyota’s culture is shaped around positive contributions to the country we love. It’s how we strive to lead the way.”

The Springbok’s international season officially kicks off at Loftus Versfeld on Saturday with the first of three Tests against Wales.

The campaign was launched by Global NCAP in 2017 with the objective of promoting safer vehicles across the continent.
Life
1 month ago