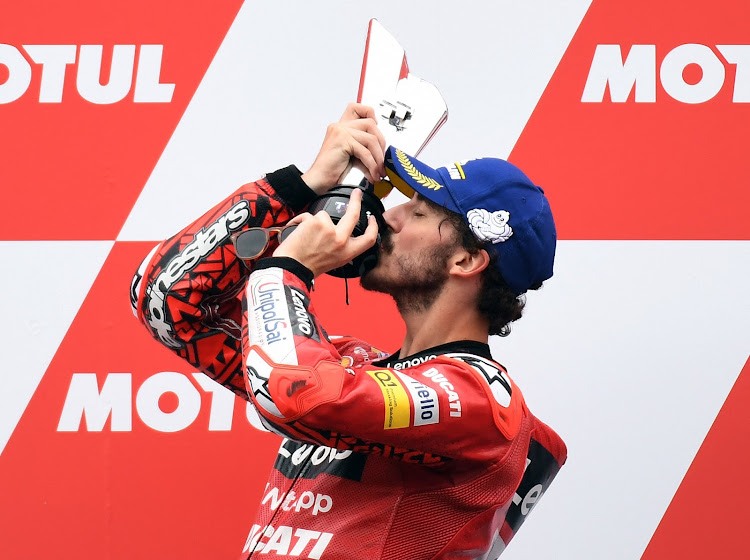 Bagnaia celebrates on the podium after victory in Assen. Picture: REUTERS

Assen, Netherlands — Francesco Bagnaia of Ducati led from start to finish to win the Dutch Grand Prix on Sunday for his third victory of the season as world championship leader Fabio Quartararo crashed twice and was forced to retire from the race.

Rookie Marco Bezzecchi of the VR46 Racing Team came second for his maiden MotoGP podium and Aprilia’s Maverick Vinales was third, his first podium since last year’s Dutch Grand Prix at the TT Circuit Assen — also known as the “Cathedral of Speed”.

Bagnaia, last year’s championship runner-up, had failed to finish his last two races, in Catalunya and Germany, but made up for it with victory in Assen where Ducati last won in 2008 when twice-champion Casey Stoner was with the Italian outfit.

“It was a very long race,” said Bagnaia, who moved up to fourth in the riders’ standings. “I’m so happy after two difficult races where we were always competitive but we didn’t get any results.

“We did an incredible job because there was one phase when it started raining a bit and it was very scary, but we finally won here and it shows we are strong.”

Quartararo was competing for second place with Aprilia’s Aleix Espargaro when contact on a risky overtaking move on lap five caused the Yamaha rider to fall but he managed to rejoin the race at the back of the field.

The collision also dropped Espargaro — who regained control but was forced off the track — down to 15th by the time he recovered as the top two riders in the championship standings lost ground.

Yamaha’s race got worse as Franco Morbidelli also lost control at the same turn before Quartararo crashed for a second time when he lost grip on his rear tyre and a highside threw him over the handlebars.

The Frenchman was visibly in pain but he was able to get up and walk away while Espargaro slowly picked off riders to move up the standings, even as rain threatened to add to the chaos towards the end of the race.

A podium finish was too much to ask of Espargaro but he finished fourth after a sensational final lap on which he overtook Red Bull KTM’s Brad Binder and Ducati’s Jack Miller in the final chicane. Binder crossed the line fifth and Miller sixth.

Brad’s brother Darryn (Yamaha) crashed out of the race.

Espargaro now sits 21 points behind Quartararo and there were no hard feelings between the pair as he warmly embraced the Frenchman when he came to the Aprilia garage after the race to apologise.