VW offers the latest glimpse of its new Amarok 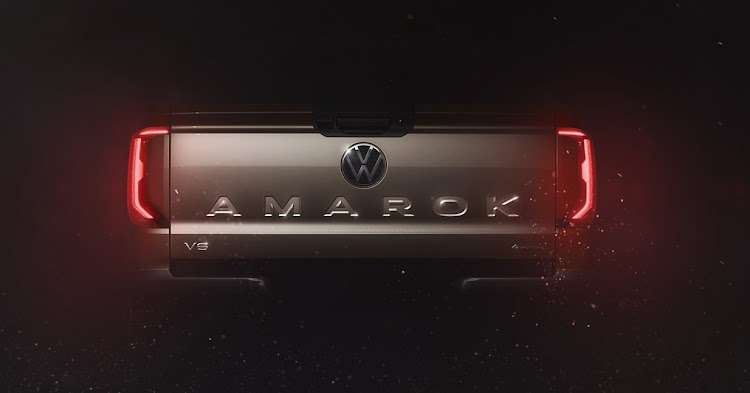 The latest teaser image of the new Volkswagen Amarok is the embossed tailgate. Picture: SUPPLIED

Volkswagen’ new Amarok, the twin to the latest Ford Ranger, has released a further teaser ahead of the bakkie’s D-Day at the end of the year.

After recently showing the premium pickup in full camouflage and a sketch of the cabin, the latest hint is a picture of the tailgate featuring Amarok embossed in metal. The name will also appear on the front of some models, the carmaker says.

VW has also revealed the Amarok’s hauling capabilities, rated up to 1.2 tonnes depending on the model, as well as a maximum towing capacity of 3.5 tonnes.

The last teaser sketch revealed a sumptuous-looking cabin with a digital cockpit and a tablet-style infotainment display. Options will include leather-look surfacing, an exclusive sound system and elegant, electric seats with 10 adjustment options.

Confirmed engines on offer will be one petrol and up to four different diesels with four to six cylinders and capacities of 2.0l to 3.0l. Power will be fed via rear-wheel drive or on-demand or permanent all-wheel drive.

At 5,350mm the new model is at least 100mm longer than its predecessor and the wheelbase has stretched by 175mm to 3,270mm, resulting in more space inside the double cab.

More than 830,000 units of the Amarok have been sold in Europe, South America, SA and Oceania. The new bakkie will launch at the end of 2022 in the first few countries with double cab, and in some individual markets with a single cab.

The Amarok and the Ford Ranger it’s based on will be built at Ford’s plant at Silverton, Pretoria, for local and export markets.

VW gives a first look at the new Amarok in disguise

Following earlier sketches, the one-tonner is revealed in the metal for the first time
Life
2 months ago

With clear Volkswagen DNA, the bakkie won’t be a Ranger clone
Life
6 months ago