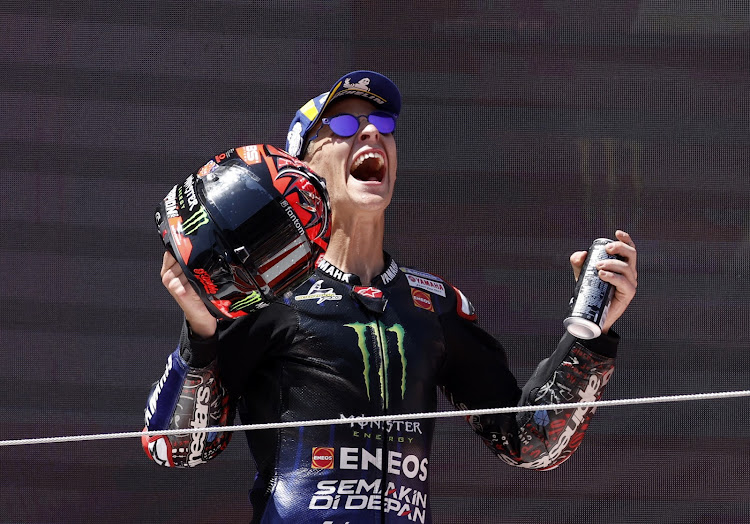 Fabio Quartararo celebrates on the podium after winning in Spain. Picture: REUTERS

World championship leader Fabio Quartararo extended his lead in the MotoGP standings with a dominant victory at the Catalunya Grand Prix on Sunday as home favourite Aleix Espargaro threw away a podium position with an embarrassing mistake on the final lap.

Yamaha's Quartararo, who started third on the grid behind pole-sitter Espargaro of Aprilia and Ducati's Francesco Bagnaia, stormed into the lead after the lights went out, overtaking both riders by the first turn.

Frenchman Quartararo had struggled for grip on his Yamaha during practice but once he took the lead, he made no mistakes as he pulled away and quickly built a big advantage, forcing Espargaro to focus on the battle for second with Jorge Martin.

“I felt good from the beginning, I knew I wanted to be first on the first corner,” said Quartararo, who has 147 points after nine races.

“Amazing race, I felt great. I was pushing from the beginning and I kept checking my rear tyre, which felt really good. So happy!”

Espargaro looked set to finish runner-up but a premature celebration on the penultimate lap — having thought the race was over — dropped him down to fifth as Pramac Racing's Martin came second and his team mate Johann Zarco third.

“It was good to keep pushing because when Aleix made the mistake on the last lap. I first thought it was a mechanical problem and then I understood he was celebrating,” said Zarco.

Espargaro, a veteran of more than 200 races and second in the riders' standings, held his head in his hands after the chequered flag as he fell 22 points behind Quartararo and he was inconsolable after returning to the paddock.

Last year's championship runner-up Bagnaia started second on the grid but was hit from behind by a falling Takaaki Nakagami on the opening lap, with the Japanese rider's helmet clipping the rear wheel.

Nakagami's bike also took out Alex Rins as the three riders crashed at the first turn. Nakagami and Rins were taken to the medical centre and will undergo further checks at a hospital.

Ducati's afternoon went from bad to worse when their two Gresini Racing riders — Enea Bastianini and Fabio Di Giannantonio — crashed within moments of each other with 17 laps to go.

Bastianini, who has won three races this season, remained third in the standings but is now 53 points behind Quartararo after a second consecutive non-finish.

SA's Brad Binder on a KTM finished eighth and his brother Darryn was 12th on a Yamaha.