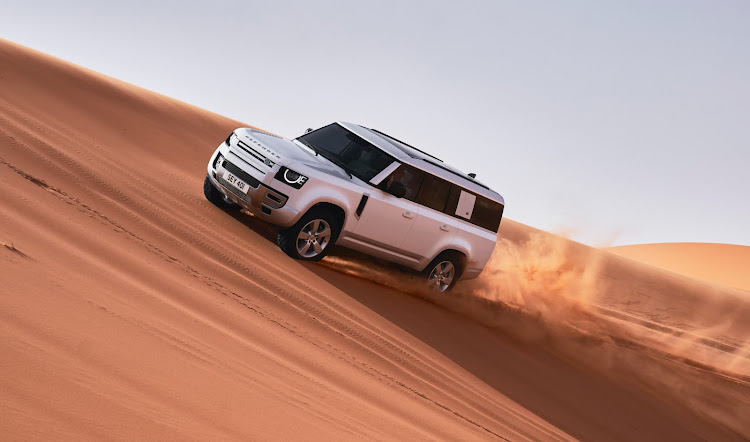 The Defender 130 joins the smaller 110 and 90 models. Picture: SUPPLIED

Land Rover has unveiled the longer 130 version of its new-generation Defender, which offers up to eight seats and slots alongside the 90 and 110 versions.

Available in two-row and three-row configurations, at 5,358mm the biggest Defender is 340mm longer than the 5,018mm Defender 110, though the wheelbase stays the same at 3,022mm. The extra length comes from stretching the cabin to make more space in the third row of seats and load area, creating a longer rear overhang.

This has reduced the departure angle to 28.5 degrees compared with the 40 degrees of the Defender 110, but the 37.5 degree approach and 27.8 degree breakover angles are similar (respectively 38 degrees and 28 degrees in the Defender 110).

The third row provides comfortable seating for three adults who are treated to heated seats, padded armrests, storage nooks and USB charging ports. A standard-fit panoramic glass sunroof, complemented by a second sunroof above row three, makes for a light and airy interior. Additional comfort is provided by ventilation for each row.

Passengers in rows two and three benefit from a small stadium rise, for superior visibility. Getting in to the third row is eased by second-row seats that slide and fold forwards to provide wide access. From the tailgate, customers can lower the Defender’s electronic air suspension with buttons inside the boot to aid with loading items.

The five-seat version of the Defender 130 offers a vast load area of up to 2,516l with row two folded.

The third row is comfortable for adults and can be folded flat to increase boot space. Picture: SUPPLIED

The Defender 130 features an 11.4-inch Pivi Pro touchscreen with a curved glass interface and software over the air capability so it is always up to date.

Drivers can personalise the three-panel layout to suit their preferences and most-used functions. The intelligent system is capable of learning habits and will adapt accordingly, such as suggesting navigation guidance at the beginning of a recognised commute.

The petrol uses a 48V Belt-integrated Starter Generator (BiSG) that harvests energy normally lost under braking and deceleration, that is stored and used later in the journey. It produces outputs of 294kW and 550Nm. The diesel musters 221kW and 650Nm torque.

Supplying the off-road abilities are Land Rover’s Intelligent All-Wheel Drive (iAWD) system, Terrain Response system, and electronic air suspension. The height adjustable suspension provides up to 430mm of articulation to clear obstacles, and up to 900mm of wading ability. The Defender 130 also has a towing capacity of three tonnes.

The Defender 130 will be launched in SA towards the end of the year, with pricing to be announced closer to the time. It will be available here in X-Dynamic HSE and X specifications, in addition to a First Edition with three distinct colour and design themes.

The seven-seater 4x4 is now more powerful, polished and luxurious - but beware the fuel bills
Life
4 months ago

Range Rover Velar to get spruced up models

Range Rover Velar to get spruced up models