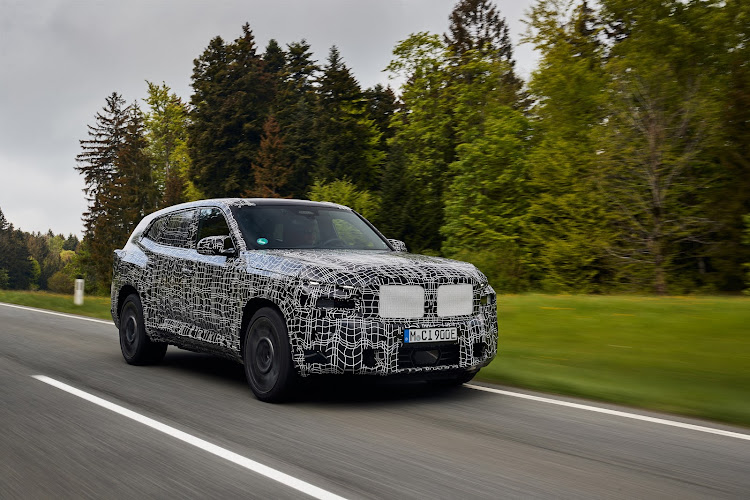 The petrol-electric hybrid XM will have outputs of 480kW and 800Nm. Picture: SUPPLIED

BMW has dropped some tasty technical nuggets on its soon-to-be-released (but still heavily camouflaged) XM SUV that has apparently just finished its final tuning process.

The most powerful production BMW yet made and only the second car to be designed by the firm's M Division — the M1 being the first — this sporty new flagship will hit the tarmac with a newly developed 4.4l twin-turbocharged V8 petrol engine paired to a hybrid electric drive system for a claimed total output of 480kW and 800Nm of torque.

This is distributed to all wheels via a hybrid-specific M xDrive four-wheel drive system. BMW hasn't released any performance figures but expect it to be impressively quick. As the XM is a plug-in hybrid it also offers a useful pure-electric driving range of about 80km.

The XM will take on rivals such as the Porsche Cayenne Turbo GT, Lamborghini Urus and Audi RSQ8 in the burgeoning sports SUV segment.

It isn’t known how close the production version will look to the concept car of November 2021 which sported a colossal kidney grille that dwarfs even the outsize nostrils on the 7 Series and 4 Series. The concept also had an aggressively sculpted bonnet and super-slim split headlights.

On the chassis front, this brute of an SUV sports 50:50 weight distribution and Adaptive M Professional suspension as standard. The latter is fitted with model-specific springs and electronically controlled shock absorbers. The M Division engineers have also equipped the XM with a new electromechanical roll stabilising system with 48V technology that allows for infinitely flatter handling characteristics through high g-load corners. This is complemented by Active Roll Comfort and Integral Active Steering. Finally, a bespoke brake system is also included as are M lightweight alloy wheels up to 23 inches.

“With the debut of the BMW XM at the end of our anniversary year, we are looking into the future, where BMW M will continue to break with conventions and push boundaries,” says Franciscus van Meel, chair of the BMW M board of management.

“Electrification gives us new opportunities to demonstrate that unmistakable M feeling in a fascinating way and transfer it to the road. Regardless of their drive technology, our performance and high-performance cars will continue to possess an unmistakable and authentic M character in the future.”

According to BMW, production will commence in December 2022.

Brace yourself for a huge petrol price increase in June

Brace yourself for a huge petrol price increase in June