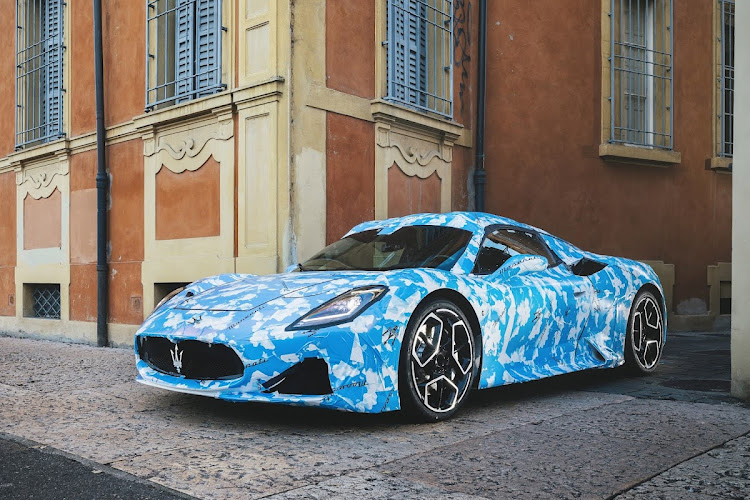 The Cielo will have its official reveal on May 25 as the convertible version of the mid-engined MC20 supercar launched in SA earlier this year. Picture: SUPPLIED

Maserati has revealed that its new topless two-seater will be called the MC20 Cielo.

The spyder will have its official unveiling on May 25 as the convertible version of the mid-engined MC20 supercar launched in SA earlier this year.

Cielo is the Italian word for sky, and highlights the open-air nature of the car. It is a model devoted to driving pleasure in the great outdoors, while maintaining all the prerogatives of a true super sports car, says the Italian car firm.

In December, Maserati showed teaser pictures of the MC20 Cielo. The convertible’s roof was camouflaged and Maserati hasn’t revealed whether it is a hard or soft top, and whether the car has scissor doors like the coupé.

Mechanically, the topless MC20 should be identical to the hard top, which includes an in-house-developed 3l twin-turbo V6 engine with outputs of 463kW and 730Nm and a rev limit of 8,000rpm.

The coupé sprints from 0-100km/h in a claimed 2.9 seconds and has a top speed in excess of 325km/h. Being slightly heavier, the convertible should be fractionally slower off the mark.

The MC20 is rear-wheel driven via an eight-speed dual clutch auto transmission, with traction enhanced by an electronic limited-slip differential. Drivers can select from four driving modes, and it is the first Maserati to be built almost entirely of carbon fibre.

The MC20 coupé is priced at R6.7m, but Maserati hasn’t yet confirmed plans to offer the convertible locally.