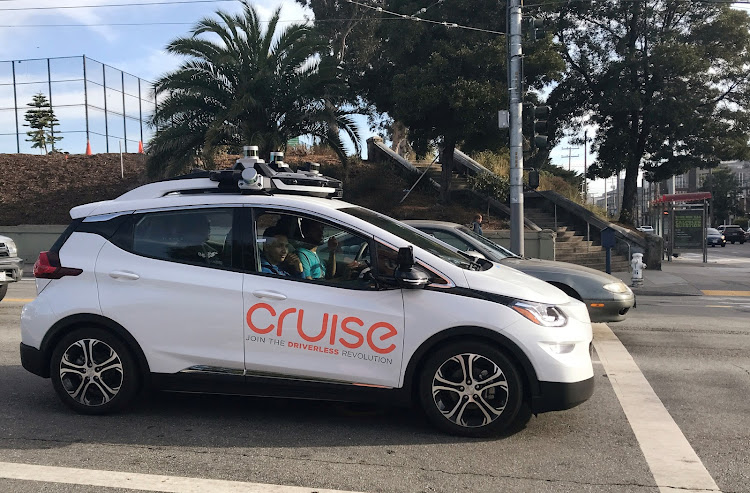 A Cruise self-driving car, which is owned by General Motors, is seen outside the company’s headquarters in San Francisco. Picture: REUTERS

San Francisco police were left scratching their heads after they pulled over a car earlier this month for driving without headlights at night and found no-one inside.

In what otherwise would have been a great April Fools' Day joke, San Francisco police officers pulled over a driverless car operated by General Motor's Cruise unit on April 1 and found no-one behind the wheel. The resulting video footage has gone viral online.

The two officers, who were not identified, pulled the car over and were puzzled by the lack of humans inside, according to a video posted on Instagram that has been viewed almost 80,000 times.

“Ain’t nobody in it. This is crazy,” said one of the officers, who tried to open the vehicle door before walking back to his cruiser. The car subsequently drove through the intersection and stopped again in the next block as bystanders laughed.

The video illustrated what Cruise CEO Kyle Vogt previously said was one of the biggest challenges for autonomous vehicles — how to interact with humans.

Cruise, which blamed human error for the lack of headlights, said it worked closely with the police on how to interact with its vehicles and had a dedicated phone number for police to call. Once the officer was clear of the vehicle, Cruise said the car relocated to the nearest safe location.

A video showing a self-driving car getting pulled over by police in San Francisco has thousands of views and shares on social media. Stephanie Magallon reports.

Cruise is operating a small number of vehicles to give full driverless rides to the public free of charge at night in San Francisco. The company is seeking the last regulatory approval required to launch commercial driverless service in the densely populated city.

Ironically, Cruise CEO Vogt had said in March that a scenario where a police officer pulls over a driverless car has to go smoothly.

“You are kind of papering over all the weird stuff that can happen when there’s no driver,” he said at a Morgan Stanley MS.N conference.

The San Francisco police department said the officers were able to make contact with the vehicle's remote operator and a maintenance team took control. Cruise was lucky in another respect.

“No citation was issued during the traffic stop,” the police department said.

Social media had fun with the incident.

“Insane that no citation was issued,” Twitter user Theodectes said. “Why was this driverless car behaving as if it was completely drunk?”

“It was driving without its headlights!!! Cops weren't confused, they we’re probably questioning why cutting edge technology somehow can’t turn its own lights on,” Albino Guidedog said on YouTube.

Postponed by tech and red tape, autonomous cars are finally getting ready to hit the roads
Life
3 months ago

There are over 1,400 automated vehicles in testing by more than 80 companies in the US
Life
3 months ago

Swedish vehicle firm has invested in  Israeli start-up Spectralics, which specialises in optical and imaging technology
Life
5 months ago
Next Article