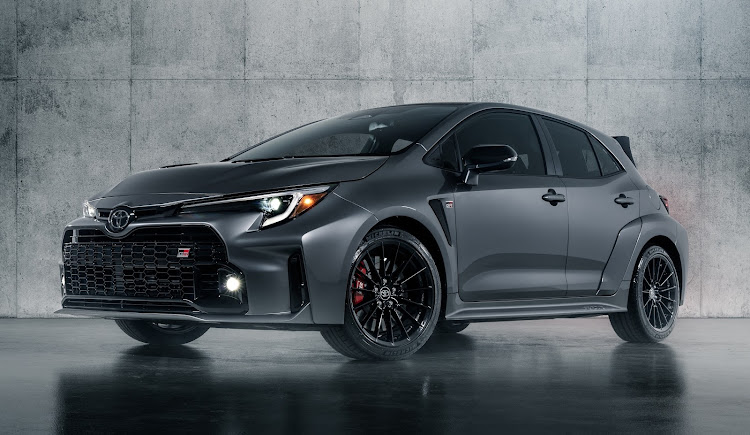 Built to do bad things to the likes of the Volkswagen Golf R, Audi S3 and Mercedes-AMG A35, this mutant Corolla is shaped by the hand of speed itself and comes fitted with wider front (+20mm) and rear (+30mm) fenders stuffed with 18-inch gloss-black 15-spoke alloy wheels shod with sticky 235/40 Michelin Pilot Sport 4 tyres.

Other defining GR Corolla exterior features include a huge front radiator grille and a pair of rally-inspired bonnet-bulge air outlets if you go for the flagship Circuit Edition over the entry-level Core derivative. The Circuit Edition also receives a larger rear roof spoiler and a lightweight forged carbon-fibre roof that not only looks incredible, but contributes to a lower centre of gravity. An aluminium bonnet and front doors are standard on both.

Swing around to the rear of the GR Corolla and your eyes will be met by a rather interesting triple exhaust tailpipe arrangement that Toyota says reduces engine back pressure. Speaking of which, let’s have a quick chat about this machine’s oily bits.

As speculated, the GR Corolla inherits the same 1.6l three-cylinder turbocharged petrol engine doing duty in the GR Yaris. Except Toyota has done a bit of fettling and it now pumps out 224kW (that’s an extra 26kW) and 370Nm worth of torque (+10Nm). There’s only one transmission to pair it to and that’s a six-speed manual fitted with Toyota’s neat iMT system that automatically blips the throttle for you on downshifts. Of course if you want to heel-and-toe the old fashioned way then you can turn it off. 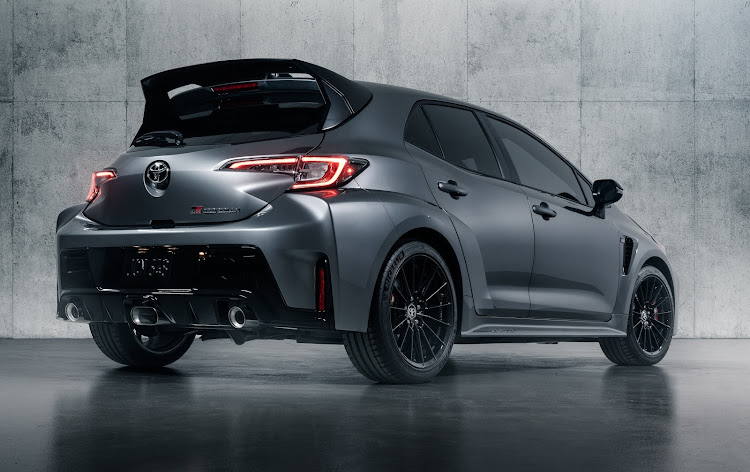 Toyota’s GR-Four all-wheel drive system is standard on this range-topping Corolla, and as with the GR Yaris is hooked up to a Drive Mode Select dial that allows drivers to easily adjust the amount of torque distributed between the front and rear axles. Normal applies a sensible 60:40 split, Track an even 50:50, while Sport applies a more tail-happy 30:70. Open differentials are standard on the Core model, but should you tick the box on the optional Performance Package, Toyota will upgrade them to the same Torsen limited-slip differentials fitted as standard equipment to the Circuit Edition.

On the chassis front, the GR Corolla rides upon a specially tweaked version of the Toyota GA-C platform that here benefits from more weld points in the frame, particularly to strengthen joints. Additional gains are made through extensive use of structural adhesive, which increases joint rigidity between component parts. According to Toyota, extra chassis braces have been added between the rear wheel wells, to the underfloor tunnel and under the floor in front of the fuel tank to further reduce unwanted flex.

To help with cornering ability, the front MacPherson suspension features unique circuit-tuned coil springs, shock absorbers and stabiliser bars for more aggressive turn-in. The rear suspension uses a double-wishbone type multilink arrangement that accommodates the AWD system’s goal of maximum agility and stability. For increased grip, Toyota widened the vehicle’s track by 60mm up front and by 85mm in the rear. 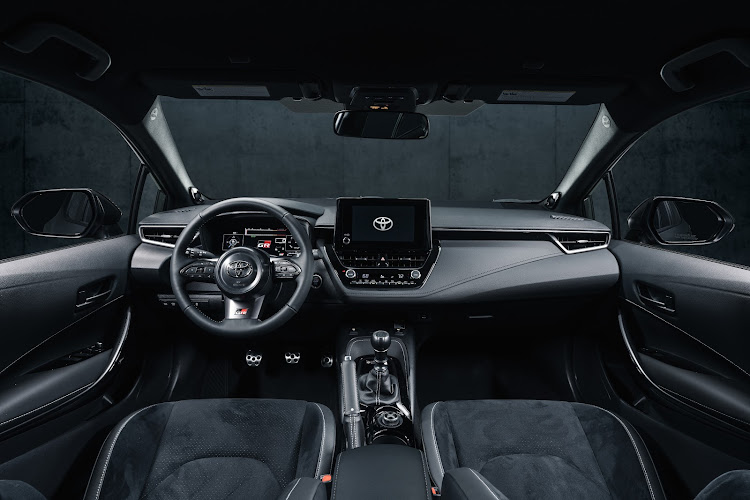 Body-hugging sports seats in the Circuit Edition are upholstered in a racy mix of suede and synthetic leather with contrasting red stitching. Picture: SUPPLIED

Inside the cabin you will find body-hugging sports seats that in the Circuit Edition are upholstered in a racy mix of suede and synthetic leather with contrasting red stitching. Other neat touches come in the form of a small-diameter leather steering wheel, a short-throw gear lever, aluminium sport pedals, a proper mechanical handbrake, two USB charging ports and a GR-only performance readout in the fully digital 12.3-inch TFT instrument cluster for monitoring things such as turbo boost pressure, oil temperature, all-wheel drive mode and g-forces.

Infotainment duties are taken care of by a centrally mounted 8-inch touchscreen compatible with Apple CarPlay and Android Auto.

According to Toyota, the GR Corolla is under consideration for the SA market.

This compact sedan is swift and satisfying, without the hot temper of Audi's RS-badged beasts
Life
3 months ago

Mercedes-AMG A35 is swift and sensible

At a more than R270,000 saving over the flagship A45 S, the A35 still offers compelling performance
Life
1 year ago