Competing in his 200th MotoGP race, the Spaniard wins in Argentina after intense ride 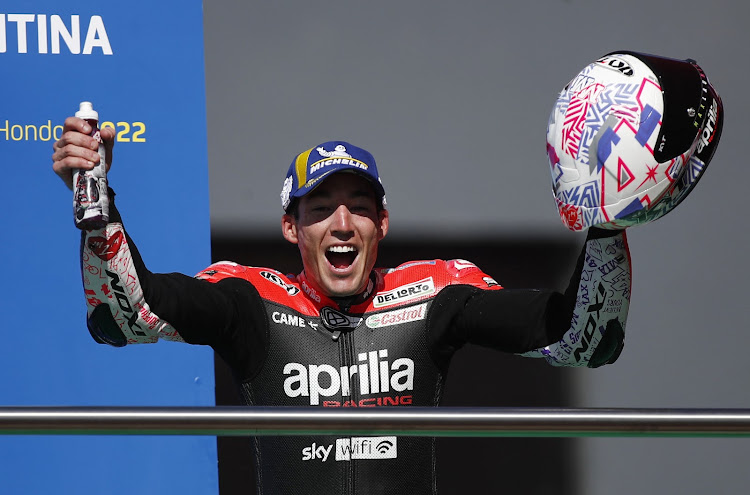 Aleix Espargaro claimed his maiden MotoGP win at the Argentine Grand Prix on Sunday to move to the top of the championship after an intense ride that also gave Aprilia their first-yet victory in the MotoGP era.

Pole sitter Espargaro, competing in his 200th MotoGP race, was overtaken before the first turn after Pramac's Jorge Martin had a perfect launch off the line as both riders managed to get away and build a two-second gap on the rest of the field.

The two traded places repeatedly at the front but Espargaro finally reclaimed the lead when he made an overtaking move stick with five laps to go while the battle also allowed Suzuki's Alex Rins to cut the deficit to less than a second.

But Espargaro held on to take the chequered flag at the Termas de Rio Hondo circuit ahead of Martin while Rins (Suzuki) finished third for an all-Spanish podium.

The result also ensured nine different riders have finished on the podium after three races this season, underlining how open the 2022 season has been.

The emotions got the better of Espargaro, who broke down in tears in the paddock as he spoke to his family over the phone while his younger brother and Honda rider Pol also came by to embrace him.

“I'm very happy. It's been a long, long time. It was my 200th GP in the premier class,” an emotional Aleix Espargaro said in a postrace interview.

Espargaro had dominated Saturday's practice before claiming his first MotoGP pole and the 32-year-old said he was under double the pressure to deliver.

“It wasn't an easy race, I didn't have grip at all, I couldn't do my best, I was trying to find a good configuration,” he added.

“We truly deserve it and the most special thing is we're leading the championship.”

Espargaro leads the championship with 45 points, seven ahead of SA's Brad Binder (KTM) who finished sixth.

Second place for Martin also gave him his first points of the season after retirements in the first two rounds, in Qatar and Indonesia.

“I'm super happy for Aleix because it's his first victory. I tried my best at the end but... I was at the absolute limit,” Martin said.

Honda, competing without Marc Marquez this weekend, were left frustrated when his replacement rider Stefan Bradl finished 19th while Pol Espargaro made an error on turn two and crashed out of the race.

Reigning champion Fabio Quartararo of Yamaha started sixth on the grid but he struggled and even dropped down to 13th at one point before recovering to finish eighth.