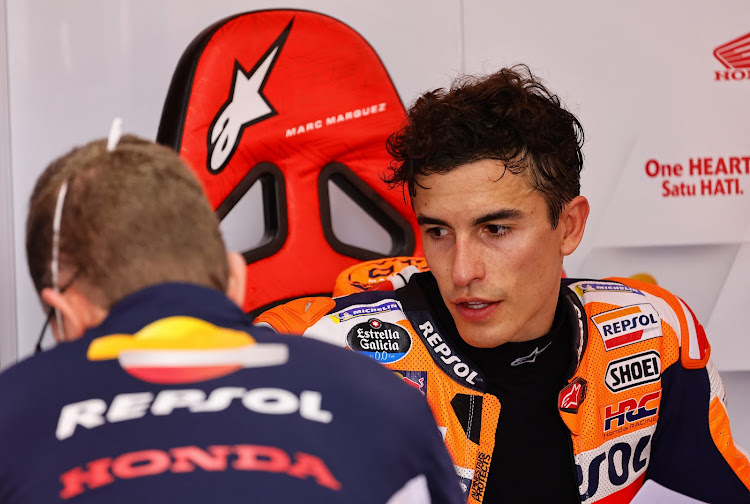 Marquez suffered a similar episode at the end of last season after a training crash. Picture: REUTERS

Marc Marquez is suffering from another episode of double vision following his crash in the warm-up session of Sunday’s Indonesian Grand Prix, the Honda rider said on Tuesday.

The six-times MotoGP champion suffered a highside on turn seven that launched him into the air and he landed heavily on his side. He took a whack to his head but avoided serious injury as the cartwheeling bike missed him.

Marquez did not race after he was declared unfit. The 29-year-old suffered a similar episode at the end of last season after a concussion he suffered in a training crash and said he had been advised by doctors not to continue racing.

“It seems that I am experiencing déjà vu,” Marquez said on Twitter. “During the trip back to Spain, I began to have discomfort with my vision and we decided to visit Dr Sanchez Dalmau, who confirmed that I have a new episode of diplopia.

“Fortunately, it is less severe than the injury I had at the end of last year. But now it’s time to rest and wait to see how the injury evolves.”

Honda said Marquez underwent a general medical check-up in Madrid to evaluate all the bruises caused by the crash and a brain MRI, which confirmed he had not suffered any other injuries.

Marquez, who won six titles in 2013-2019, suffered a season-ending crash in the first race of the 2020 season when he broke his arm. He also missed four races in 2021 to fully recover from the arm injury and concussion.