Offering up to eight seats and a huge boot, the marque’s family bus takes on the Kombi and Carnival The new Zafira Life is one of the largest mini buses in the class. Picture: SUPPLIED

The Opel Zafira began life 23 years ago as an Astra-based compact MPV that competed against the Renault Scenic when such vehicles were popular.

Now that the segment has all but gone extinct as buyers flock to SUVs instead, the Opel has been repurposed as the Zafira Life, a full-sized people carrier that takes on buses like the Volkswagen Kombi, Ford Tourneo, Kia Carnival and Hyundai Staria.

The family-focused Edition is the archetypal soccer mom’s vehicle with its eight cloth-covered seats and multiconfigurable three rows of seats. The second and third seating rows each contain three full-size seats that are mounted on rails and can be individually adjusted for legroom and backrest angle or flipped down to extend cargo space, while the third row can be removed.

There is ample stretch-out space for all occupants, and both versions of the bus have a huge, 1,060l boot behind the third row, much larger than that found in typical seven-seater SUVs. There are also plenty of storage spaces including a cooled glove box.

The more luxurious, leather-upholstered Elegance is aimed at business customers or families seeking more comfort. The second row has two individual seats with armrests and a folding table in the centre, creating a lounge-like atmosphere when the middle row seats are swivelled to face backwards.

I drove the new Zafira Life at its media launch in Gauteng’s Magaliesburg area last week, and with two people on board the 110kW/370Nm 2.0l turbo diesel engine delivered reasonable performance. Paired with an eight-speed automatic transmission and front wheel drive, it comfortably cruised the open road and had decent overtaking pace.

It’s not as punchy as the new Kia Carnival with its 148kW/440Nm 2.2l engine though, and in standing starts the Zafira Life has noticeable turbo lag at Gauteng altitude. Opel claims the Zafira Life sips just 6.3l/100km on a combined cycle, but this is unlikely to be achievable in real-world driving. 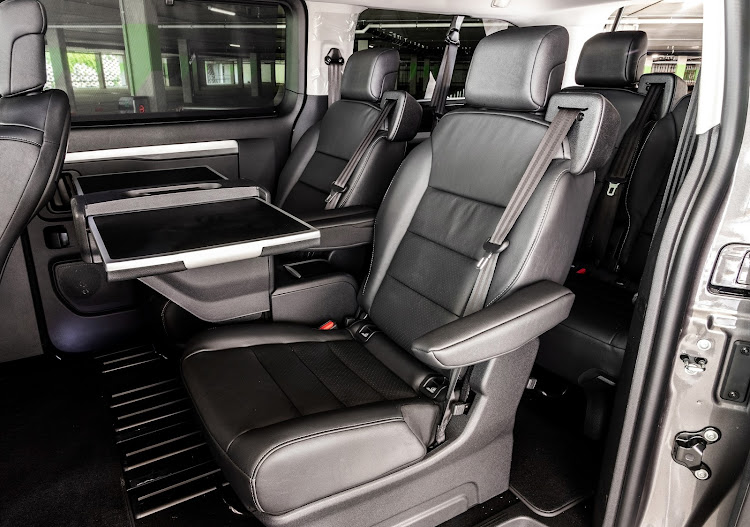 The range-topping Elegance model is a seven-seater with a fold-out rear table. Picture: SUPPLIED

The Opel feels refined and sails along in reasonable silence, but its cabin is dated compared with rivals such as the futuristic-looking new Staria and Carnival. This is not surprising given that the Zafira Life is a rebranded Peugeot Traveller, which was launched in 2015.

The seven-inch infotainment interface is tiny compared with the tablet-sized touchscreens that are de rigueur nowadays, but it has the necessary functionality including Android Auto and Apple CarPlay capability.

The Opel’s hard-plastic dashboard also doesn’t generate premium vibes like some of its rivals.

The Zafira Life has a relatively smooth-sailing ride with high-profile tyres that cushion the blows of potholed roads, while armrests for the front seats ensure long-distance comfort.

An advantage of such buses is their ability to carry plenty of passengers and luggage simultaneously, unlike three-row SUVs that have limited boot space when all seats are occupied.

With its 5,306mm length the Zafira Life is one of the largest vehicles in its league.

Prices include a five-year/100,000km warranty and service plan with roadside assistance.

Replacing the H1, the streamlined bus comes in nine or 11-seat options
Life
7 months ago