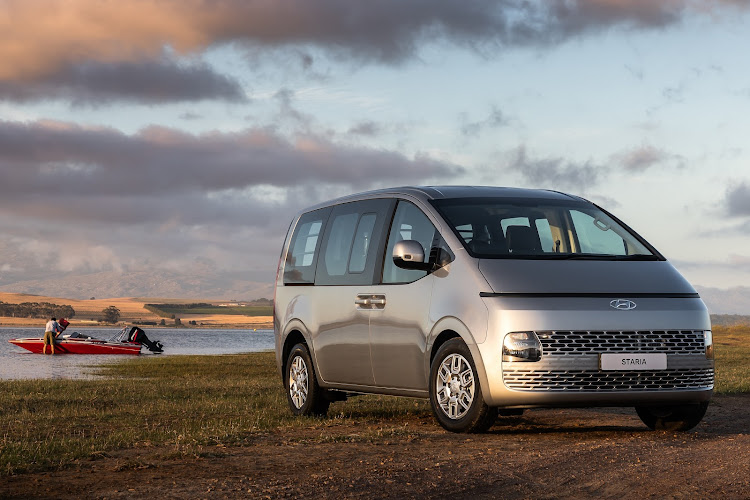 Hyundai SA has launched the more versatile and cheaper Multicab version of its futuristically-styled Staria bus.

Late in 2021 the Staria was introduced here as a people carrier in nine- and 11-seater guises to replace the Hyundai H1, and its swoopy, sci-fi styling shook up what is usually a conservative market segment.

Competing against rivals such as the Toyota Quantum Crewcab and Volkswagen Transporter crew bus, the new Multicab is a five-seater with a giant cargo area sealed off from the rest of the cabin by a bulkhead.

With its one-ton payload and 2,500kg braked towing capacity, the versatile Staria Multicab can be roped in as a utility vehicle or as a family car for pursuits such as mountain biking and camping.

With its enormous 2,890l of boot space, three or more bicycles can be stacked standing up in the cargo bay, which is accessed by double side-opening doors. Passengers gain access to the rear seat through sliding doors on each side.

The three-seater rear bench is not adjustable but offers extensive leg- and headroom, and there are large storage nooks under the seat. 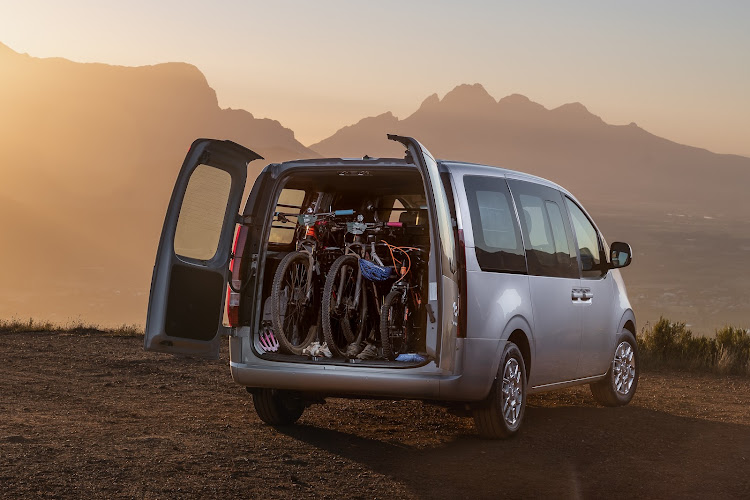 Three bicycles can be stacked standing up in the cargo bay. Picture: SUPPLIED

The dashboard plastics are hard but the overall cabin feel isn’t too utilitarian, with the large touchscreen and digital instrument panel creating a modern vibe. The artificial leather seats are comfortable and the height- and reach-adjustable steering column ensures that drivers of varying physiques will find an agreeable driving position.

At 5,253mm long and 2,000mm high the Staria is a sizeable unit, but huge windows create a goldfish-bowl-like visibility which makes this bus easier to manoeuvre in tight urban spaces. With its power steering it’s effortless to drive and doesn’t feel overly bulky. 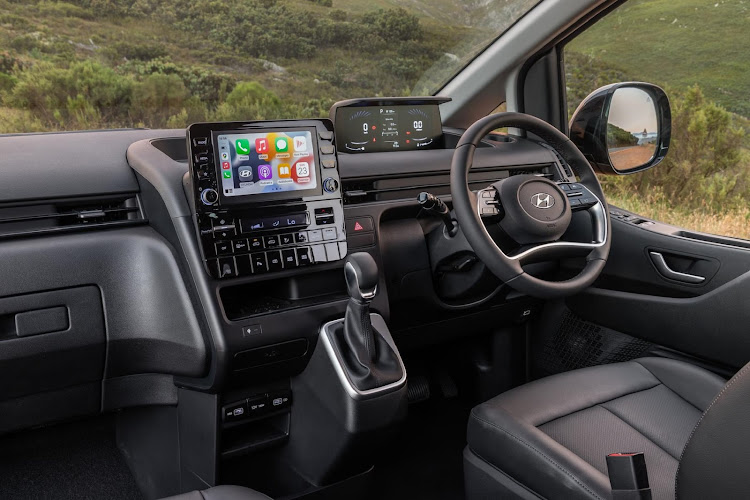 Though it is a more utility-focused model it doesn’t skimp on features. Picture: SUPPLIED

To cater for heavy loads the Multicab rides on a rigid rear axle with leaf spring suspension instead of the more comfort-focused multilink setup with coil springs of other Starias, but the Multicab’s ride proved plush enough on our trip from Joburg to Cullinan at last week’s media launch. It rode the bumps without excessive jarring, and based on how fresh we felt after a roughly 200km round trip, it would make a comfy long-distance family hauler. It would be even more comfortable if the front seats had armrests, however, and this was a glaring omission.

It is a quiet and refined drive, with none of the metallic vibrato that characterises some panel vans. The metal-lined cargo hold is well insulated from the passenger quarters.

The Multicab is powered by the same 2.2l turbo diesel engine used in the rest of the Staria range, with outputs of 130kW and 430Nm and feeding the front wheels via an eight-speed automatic transmission.

At Gauteng altitude there is noticeable turbo lag initially, but once the revs rise the Staria is an easy cruiser and overtaker. It’s frugal too, with the test vehicle averaging under 8l /100km on the mostly open-road drive.

Replacing the H1, the streamlined bus comes in nine or 11-seat options
Life
7 months ago