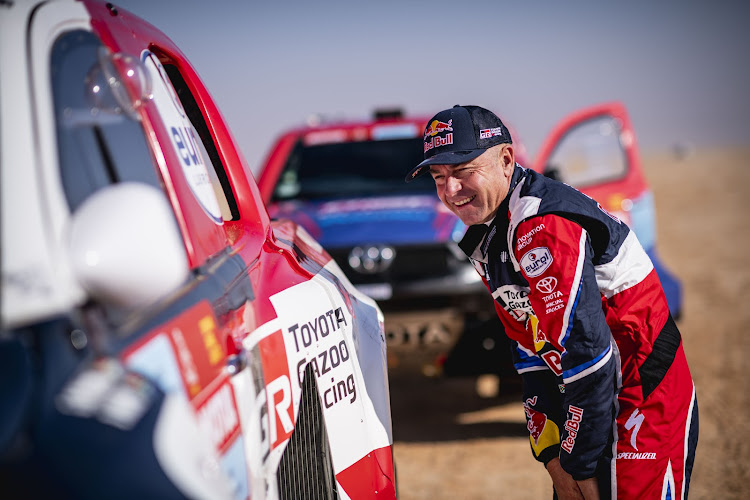 Giniel de Villiers' stage win moved him up to fifth overall in the standings. Picture: SUPPLIED

The Toyota driver ended the day 39 minutes and five seconds clear of the nine-times world rally champion with three stages remaining before the annual endurance event ends in Jeddah on Friday.

“We had a really good run, without any big push and we finished third in the stage. Now we also have a good lead, we are quite happy,” said Al Attiyah.

South African Giniel de Villiers led a Toyota factory team one-two-three finish in the 287km timed stage that started and ended in Wadi Ad Dawasir after a desert loop over dunes and through canyons. The win moved De Villiers moved up to fifth overall in the standings.

Loeb, who had to change a punctured tyre, was fifth for the Bahrain Raid Xtreme team.

“We did a good stage, I think. We pushed hard from the start to the end, no mistakes in the navigation,” said the Frenchman.

KTM's Austrian Mattias Walkner took over at the top of the motorcycle standings with Britain's 2017 winner Sam Sunderland 14th in the stage and dropping to second and two minutes 12 seconds adrift.

The stage was won by Chilean Jose Ignacio Cornejo on a Honda.

“With three days to go, there is not really any strategy, just really staying on the navigation and the road book, try to avoid losing so much time,” said 2018 winner Walkner.

“There are two really long stages left, I think, and the last day is not so long.”

The race in Cape Town will be the first time an FIA single-seater world championship will be staged in SA since the 1993 Formula One Grand Prix at ...
Life
3 months ago
Next Article