With luxury and tech from the flagship S-class, the new sedan arrives in C200 and C220d variants 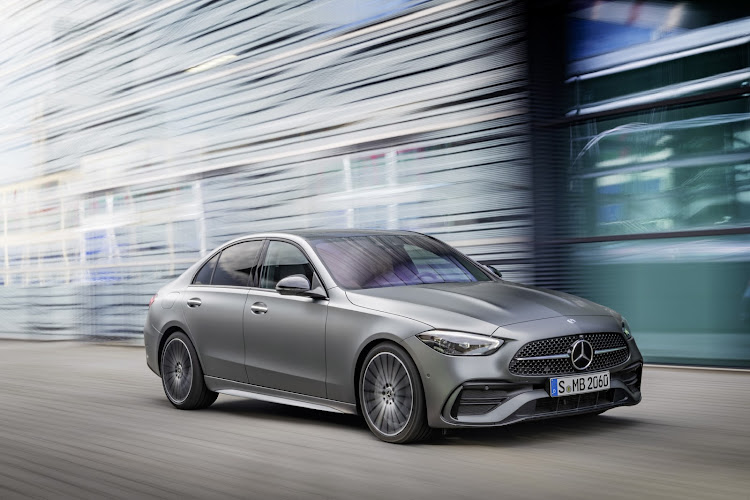 Since its introduction in 1982 as the “Baby Benz” 190, more than 10.5-million C-Class vehicles have been sold globally, and the new fifth-generation C-Class has arrived in SA.

The all-new sedan has inherited much from the flagship S-Class, including its exterior design and sumptuous interior, and is manufactured in the Mercedes-Benz East London plant.

Six cylinder engines are gone, and the range will consist of four-cylinder models only. Petrol and diesel plug-in hybrids will follow later, but the line-up is initially available in two variants: the C200 and C220d.

The entry-level C200 is powered by a 1.5l four-cylinder turbocharged petrol engine with outputs of 150kW and 300Nm, powering the rear wheels via a 9G-Tronic automatic transmission. The C200 will cover the 0-100km/h sprint in a claimed 7.3 seconds and top out at 246km/h, while fuel consumption is quoted at 6.6l/100km.

The more expensive C220d has a 2.0l four-cylinder turbo diesel engine with 147kW and 440Nm. As with its petrol sibling, drive is sent to the rear wheels via a 9G-Tronic gearbox and claims the same 0-100km/h sprint in 7.3 seconds, with a top speed of 245km/h. Fuel consumption is quoted at an impressive 4.6l/100km.

Many intelligent driving assistance systems come from the S-class, including rear-wheel steering, and the C-Class has taken another major step forward with respect to digitalisation and high quality.

Both variants are at the forefront of automotive technology with systems adapted from the S-class launched in 2020. These include a giant “portrait-format” touchscreen on the centre console. As standard it measures 9.5 inches but customers have the option of installing a larger 11.9 inch version.

The second-generation MBUX infotainment system now offers features such as an enhanced “Hey Mercedes” voice assistant. The look of the screens can be individualised with three display styles (Discreet, Sporty and Classic) and three modes (Navigation, Assistance and Service).

In front of the steering wheel drivers can look forward to a crisp freestanding LCD screen that replaces the conventional analogue instruments of the past. As with the centrally mounted touchscreen it can also be had in two sizes: 10.25 or 12.3 inch. 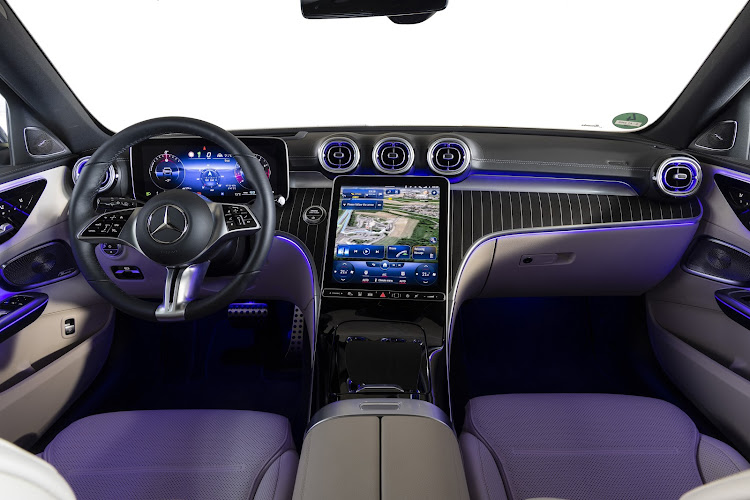 At 4,751mm the car’s grown 65mm in length, and it’s also expanded 25mm in wheelbase and 10mm in width to improve leg and elbow room inside the cabin. Luggage capacity remains at 455l.

Under the enlarged body is a more luxurious interior than ever, featuring high-quality materials, ambient lighting and aviation-inspired air vents.

Other cutting edge tech from the S-class includes navigation with augmented video and digital lights that are able to project guidelines, symbols and animations onto the road.

Also worth noting is that the C200 will be available at launch in a limited debut edition known as Edition 6, which has numerous visual accents that underline its exclusivity. It will be limited to just 400 units in two distinct colours: Spectral Blue and Selenite Grey. Additional features include an AMG Line package, a set of striking AMG 19 inch alloy wheels, a panoramic sliding sunroof, and Agility Control.

The new C-Class is now available to order from Mercedes-Benz dealerships across the country.

Diesel-engined E-Class offers luxury with parsimony, but it’s not for performance seekers
Life
1 month ago

Following the R10bn in 2018, Mercedes-Benz invests another R3bn into East London plant
Life
2 months ago