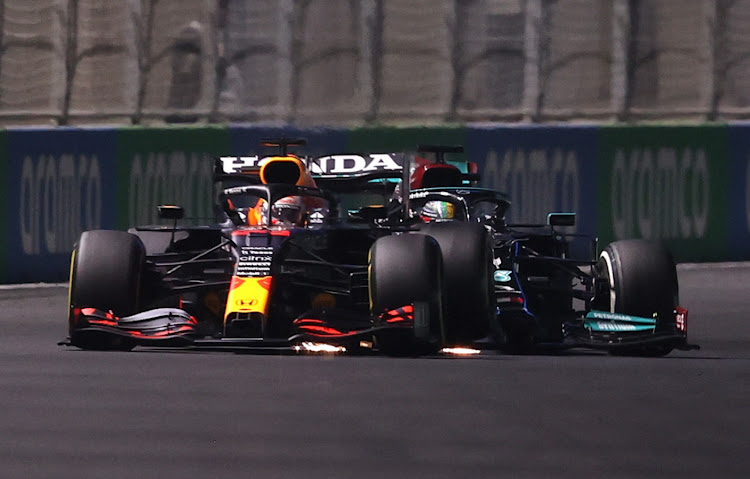 Bad blood: Hamilton drives into the back of a suddenly-decelerating Verstappen in Sunday’s Saudi Arabian GP. Picture: GETTY IMAGES

Max Verstappen led every lap of last year's processional Abu Dhabi season-ender but Mercedes have warned against reading too much into that dominant display ahead of this weekend's winner-takes-all title decider.

The 24-year-old Red Bull driver and Mercedes' seven times world champion Lewis Hamilton return to the Yas Marina circuit level on points but with Verstappen ahead 9-8 on race wins.

In 2020 Hamilton had already clinched his seventh title and was still suffering the after-effects of contracting Covid-19, which had ruled him out of the previous Sakhir Grand Prix in Bahrain.

Before last season's defeat in Abu Dhabi, Mercedes had triumphed six years in a row in the emirate with Hamilton winning four times.

"Last year Lewis was (racing) a few days after a bout of Covid. There's no way he was performing at his best. It's not an easy thing to get over," said Shovlin.

"Our analysis after that event ... indicated that we just put the setup in the wrong place," he added.

"We had development tyres there, we did work focusing on those. We'd won the championship and we decided to try to understand the tyres rather than focus on the race weekend.

"We ended up going into the race underprepared with a car that wasn't well-balanced and I think ultimately that's where it cost us.

"We're treating it like a new circuit and we know what we need to do. We need to go there and win," said Shovlin.

Emotions are running high after last weekend’s chaotic Saudi Arabian Grand Prix, which was won by Hamilton after the pair collided. Hamilton said Verstappen drove over the limit and as if the rules did not apply to him.

Hamilton exclaimed over the team radio that the Red Bull driver had brake-tested him after he ran into the back of Verstappen's car and damaged his front wing.

The Briton went on to win with fastest lap for Mercedes, with Verstappen second despite being handed two time penalties totalling 15 seconds — a five-second sanction awarded during the race for running off the track and keeping the lead while defending against Hamilton and a 10-second penalty after the race for a collision as he attempted to hand the place back.

"He's over the limit, for sure," Hamilton said of a youngster who has earned plenty of admirers for his speed and talent while acquiring a reputation for aggressive and uncompromising racing.

Verstappen defended his driving after Formula One stewards found him predominantly responsible for the collision.

"I went to drive to the right side and I slowed down and I was braking, downshifting and he just stayed super close behind me," Verstappen said, adding he was just trying to let Hamilton pass.