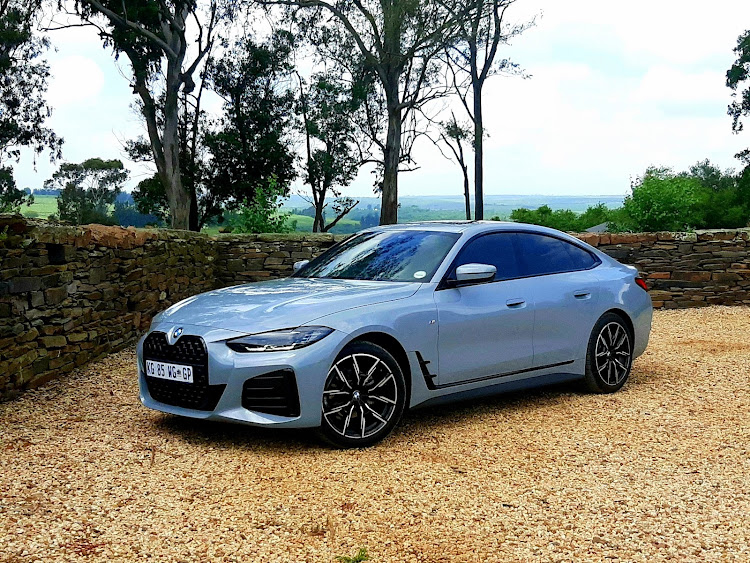 The new BMW 4 Series Gran Coupe was launched in SA this week, offering four-door practicality compared to the 4 Series coupé.

With its grand looks, the new Gran Coupe represents a 50% share of the entire 4 Series model range, and the group expects to maintain this volume.

It is 143mm longer, 27mm wider and 53mm taller than its predecessor launched in 2014. The track widths have also grown by 50mm in front and 29mm at the rear, making for a stouter posture. The wheelbase is 46mm longer for more cabin room, while it has 470l of boot space that can be expanded to 1,290l by folding down the rear seats. 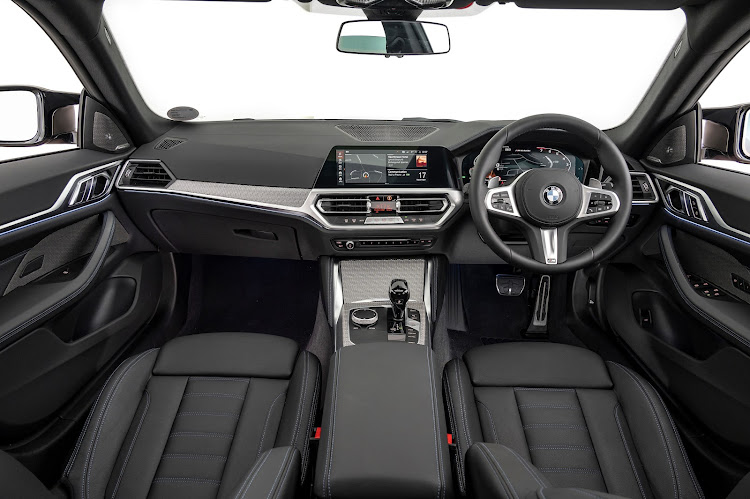 The interior is similar to its 4 Series coupe cousin. Picture: SUPPLIED

A 12.3-inch digital display peers from behind the steering wheel and there is a 10.25-inch control display, smartphone integration with wireless Apple CarPlay and Android Auto.

The new-age BMW cushiness we’ve reported on in the past and created by sophisticated chassis technology that includes a re-engineered five-link rear axle and lift-related dampers is retained, the latter a match for some of the pothole-riddled Durban roads we drove on.

It wafts everywhere on standard 18-inch light-alloy wheels for the four-cylinder 420i and 420d models and 19-inch for the M440i xDrive Gran Coupé.

Comfort, however, is only half the story.

With BMW resisting a full-on M4 Gran Coupe like Audi does with its RS5 Sportback quattro, the M440i xDrive remains the performance model in the range. Rapid, sure-footed, practical, comfortable and classy are describers of the only six-cylinder model in the range.

The M Performance model puts its 285kW and 500Nm to great use through an all-wheel drive system. Acceleration is strong and the exhaust system pops and crows excitingly.

It has an M Sport differential and M Sport brakes as standard, adaptive M suspension and variable sport steering as options — and directional change is sweet. It corners with safe conviction even on bumpy surfaces, with no telltale hints of mid-corner understeer or surprise oversteer.

It’s a pity that BMW SA no longer markets the 430d with a six-cylinder motor. It would have given the M440i a good run with quieter, economy-minded but equally devastating performance, but there’s a four-cylinder diesel engine in the BMW 420d Gran Coupé with a 140kW and 400Nm, which has ample torque to maintain momentum on steep uphills.

With outputs of 135kW and 350Nm, this engine uses its breadth of performance and economy to good use. Though marginally defeated by some of the steepest KwaZulu-Natal valley roads, the engine and transmission reward with quicker responses than in its diesel counterpart.

It’s also R47k cheaper than the 420d, while its performance credentials of 7.9 secs to 100km/h and a 235km/h top speed aren’t sheepish when compared with the 420d’s 7.5 secs/233km/h  ratings. The entry-model is just as adept at smooth travel as its more expensive cousins.

You can transform the 4 Series Gran Coupe from an elegant and graceful set of wheels to an angrier-looking racer through a deeper front apron, a larger boot-lid spoiler and exterior accents in gloss-black or carbon-fibre effect, and a selection of sportier alloy wheels. 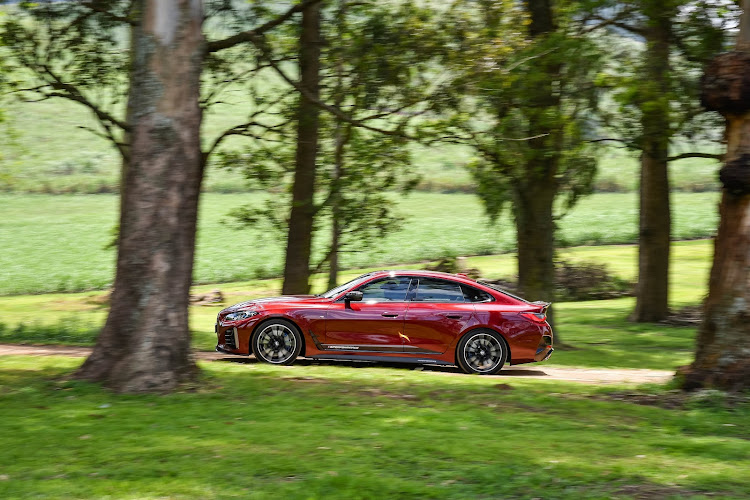 Prices include a two-year/unlimited km warranty and five-year/100,000km service plan.

BMW 420i convertible dishes out breezy comfort with style

The head of BMW design explains the new 4 Series grille

Design is not about pleasing everybody, it’s about standing out, says Domagoj Dukec
Life
1 year ago

1.
Rugged Ineos Grenadier prototypes in SA for ...
Life / Motoring
2.
BIG READ: Ukraine is the sideshow of Russian ...
Life
3.
Deep, dark secrets of crew aboard wild superyachts
Life / Gadgets & Gear
4.
Would you pay R280m for a number plate?
Life / Motoring
5.
Devlin Brown at the water cooler: What’s up with ...
Life

1.
Rugged Ineos Grenadier prototypes in SA for ...
Life / Motoring
2.
BIG READ: Ukraine is the sideshow of Russian ...
Life
3.
Deep, dark secrets of crew aboard wild superyachts
Life / Gadgets & Gear
4.
Would you pay R280m for a number plate?
Life / Motoring
5.
Devlin Brown at the water cooler: What’s up with ...
Life