The most popular Porsche gets a power boost and a facelift 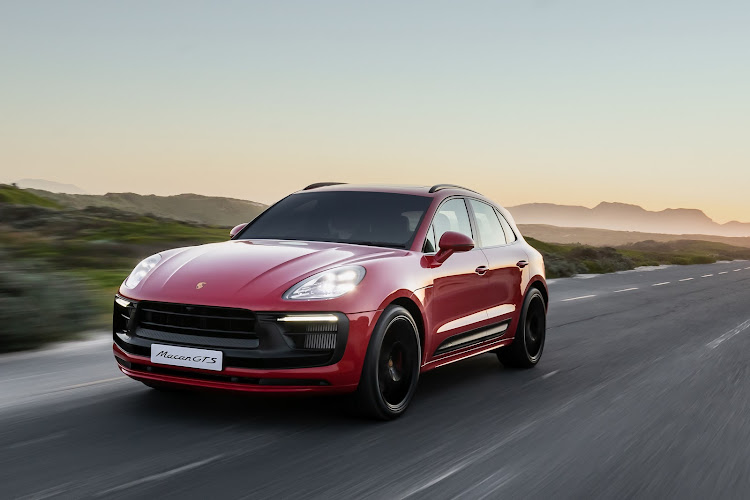 The Macan GTS feels like a true-blue Porsche with its velocity and vocals. Picture: SUPPLIED

Say what you want about sports SUVs (and if you’re a sports car purist, you will likely loathe them), but they rake in the profits and attract new buyers to brands.

Aimed at owners that are more likely to take their SUV on to a racetrack than an off-road trail, the midsized Porsche Macan has become the German marque’s most popular model with more than 600,000 units sold since its 2014 launch, and about 80% of Macan buyers are new to Porsche.

After a revision in 2019, Porsche has given the Macan another update with increased performance, a sharper design and updated interior. All three available versions come with significantly more power than their predecessors, and a more rear-biased all-wheel drive system for more dynamic handling.

The restyle includes a redesigned nose that emphasises the vehicle’s width for a more imposing presence, along with LED headlights and Sport Design side mirrors. At the rear is a restyled diffuser with a 3D structure that is also optionally available for the car’s side blades.

One of the new colours is a striking Python Green which is exclusively available for the Macan GTS with the GTS Sport package.

The cabin has been updated with 911-type steering wheels, and haptic-feedback controls that physical buttons in the centre console. While the haptic console hits the spot aesthetically with its high-quality glass look, it isn’t my favourite type of interface as the controls need to be pressed harder than touchscreen icons but lack the distinctive click of physical buttons.

The three model derivatives all have distinct flavours, not only in their power outputs but their sound and general demeanour, as I discovered when driving them at the launch in the Western Cape last week.

The six-cylinder GTS — boosted with an extra 44kW and 30Nm — is the one that best channels the Porsche spirit and should most appease the sporting purists. With 324kW and 550Nm this 2.9l biturbo model is the most thrustful of the trio and snarls like an angry watchdog — the sound courtesy of a sports exhaust that is standard in the GTS and optional in the other two versions. 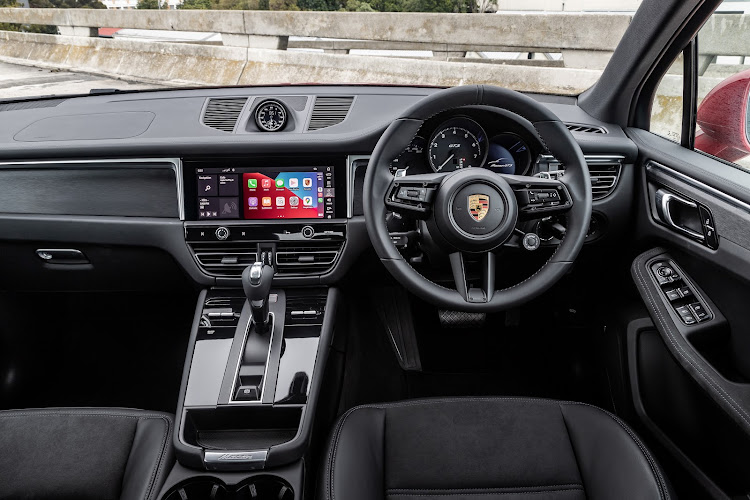 Haptic controls replace physical buttons in the console between the seats. Picture: SUPPLIED

Along with the Normal and Sports driving modes that are also offered in its more junior stablemates, the GTS has a Sport Chrono package with an additional Sports Plus setting that ramps up the intensity by selecting lower gears to keep the engine in its I-want-to-party zone.

In this mode the GTS is a charismatic thing that awakens the boy racer inside, and along with its ability to bolt from 0-100km/h in just 4.3 seconds and reach a top speed of 272km/h, it’s surprisingly nippy through corners for a high-riding conveyance.

Riding 10mm lower than before, and with PASM adaptive air suspension (standard in the GTS and optional in the others) that can be firmed or softened on demand, the Macan GTS is usefully playful in twisty mountain passes. Its sharp steering also delivers Porsche-typical sensations in cut-and-thrust driving.

The GTS has the best stopping power in the range with Porsche Surface Coated Brake (PSCB), which uses a tungsten carbide coating that’s about 10 times harder than cast iron. Again, this high-performance trick is standard in the GTS and optional on the other two.

The optional GTS Sport package — available only for the range-topping GTS — further improves the corner-slicing abilities with the fitment of black GT design 21-inch wheels with high-performance tyres, and Porsche Torque Vectoring Plus which diverts more torque to the outside wheels to improve cornering grip.

If money’s no object, the R1,551,000 Macan GTS is the pick of the range with the most fire in its belly. A step lower, for R280,000 less the Macan S offers six-cylinder sizzle in a more restrained manner.

Like the GTS it’s powered by a 2.9l V6 turbo, but detuned to 280kW and 520Nm for a claimed 0-100km/h sprint in 4.8 seconds and top whack of 259km/h. That’s good bang for buck and the Macan S has similarly pinned-down handling, but without the optional Sport Chrono package and sports exhaust the emotion is dialled down. It’s more Bon Jovi than Metallica.

Updated BMW X3 is now on sale in SA

But like pineapple on pizza, this sports car on stilts won’t make sense to everyone
Life
8 months ago
Next Article