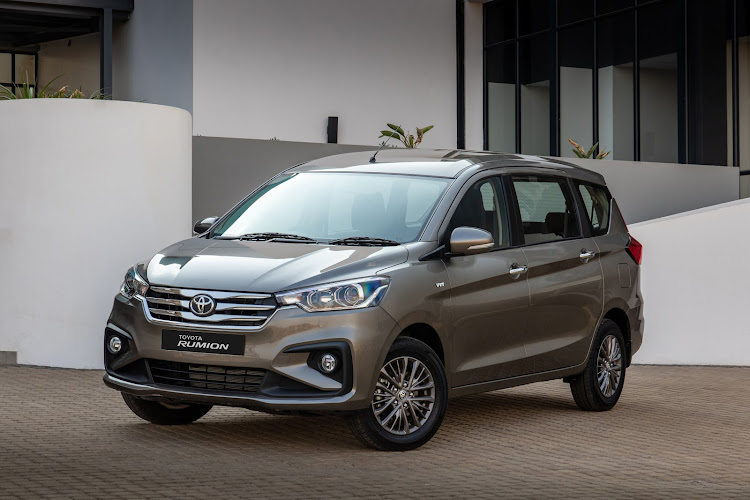 Toyota's all-new compact MPV is based on the Suzuki Ertiga. Picture: SUPPLIED

Uber drivers and soccer moms on a budget have a new seven seater to add to their buying shortlist: the Toyota Rumion.

The compact MPV replaces the seven-seat Avanza which has long served as Toyota’s affordable people mover in SA, and the Rumion comes with a substantial price cut.

A noteworthy change is the switch from rear-wheel drive to a front-wheel-drive layout, which brings improved fuel economy, better packaging and reduced mechanical componentry.

If the Rumion looks familiar it’s because it’s a rebadged and slightly restyled Suzuki Ertiga, as the latest fruit of the Toyota and Suzuki strategic alliance which has already borne the Toyota Starlet (based on the Suzuki Baleno) and the Toyota Urban Cruiser (a Suzuki Vitara Brezza clone).

The Rumion arrives in a five-model range priced between R245,600 and R317,200, which is marginally higher than the equivalent Suzuki Baleno models but a considerable saving over  the R267,100-R344,700 for the outgoing Avanza.

All versions of the Rumion are powered by a 1.5l petrol engine carried over from the Avanza, while the 1.3l engine has been culled. With outputs of 77kW and 138Nm, it is paired with either a five-speed manual or four-speed automatic transmission, and there are three grades on offer.

Entry to the range is the budget-focused Rumion 1.5 S which offers basic comforts like electric windows, air conditioning and ventilated cupholders. It has steel wheels and the cabin is finished in textile trim with a three-spoke urethane steering wheel. The second row seats have a 60/40 folding split. 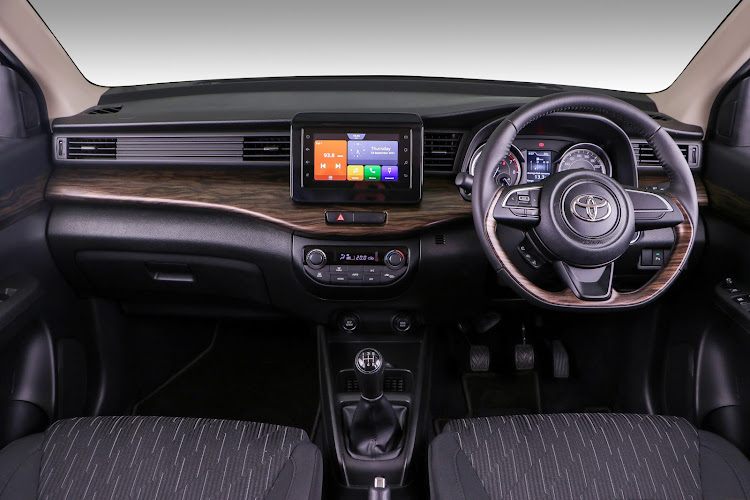 The range-topping Rumion TX has touchscreen infotainment and a wood-trim finish. Picture: SUPPLIED

SX and TX models also boast an audio system with Bluetooth, USB and Aux interfaces playing through four speakers. Toyota Connect is available across the range (including on the S-grade sold without audio), which offers telematics services, Wi-Fi hotspot (including complimentary 15Gb data) and vehicle health status. The above can be accessed via the MyToyota App on smartphones.

The range-topping TX is aimed at family buyers and has additional fare such as keyless entry with push start, fog lamps and automatic air-conditioning. The audio system is upgraded to a touchscreen type with a reverse camera and Apple CarPlay/Android Auto functionality, with six speakers.

Chrome door handles and alloy wheels give the TX a more premium exterior vibe while the cabin gets wood-trim finishes.

With both offering good value for money, brand loyalty and warranties will decide sales winner
Life
1 year ago