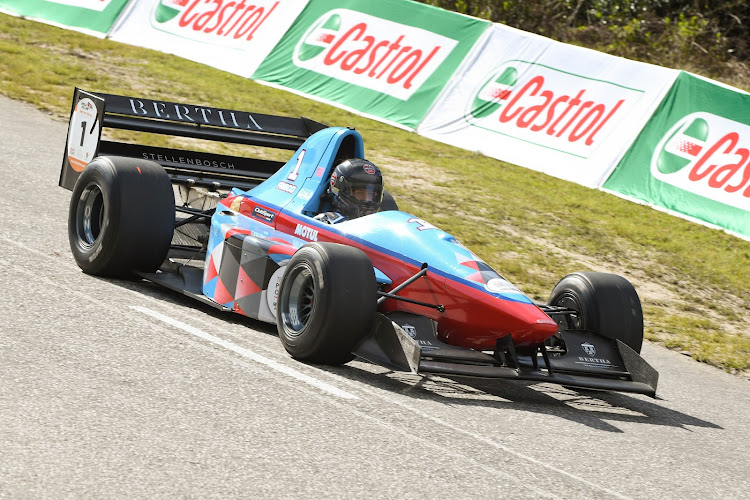 Knysna — The Simola Hillclimb has a new outright record. Andre Bezuidenhout powered the agile Gould GR55 to the best time on the 1.9km Simola Hill, stopping the clock in just 34.965 seconds.

He did this in the final Top 10 Shootout for the Single Seater and Sports Prototype category on Sunday. In the process, he slashed his current record from 2018 by 0.563 sec — achieving an average speed of 195.624 km/h.

“It was a close-run thing, as the shadows were already starting to come over the track when I did my run in the late afternoon,” Bezuidenhout said. “If we were 10 minutes later, I wouldn’t have been able to go that fast as the temperature began falling. So it was the perfect run in the end. I desperately wanted to do a 34, and the team worked very hard to achieve this great result.”

Robert Wolk was second in the Top 10 Shootout in his 2007 Ferrari-powered A1 GP car, ending on 37.205 sec following consistent improvements throughout the weekend, and a personal best time of 36.819 sec in the Class Finals.

Byron Mitchell finished third with 40.381 sec in his 2002 Reynard Formula VW single-seater, just half a second ahead of Andrew Rackstraw in a similar car.

Devin Robertson was the quickest of the sports prototype machines and fifth overall in the Top 10 Shootout, powering his high-revving 1.4-litre Suzuki-powered Radical SR1 Clubsport to 41.075 sec, beating the only Ford V8-powered Shelby CanAm in the country, driven by Rui Campos to a time of 41.676 sec. Michael Verrier was seventh in the Nissan 3.5 V6-powered version of the CanAm in 43.645 sec.

There was a shakeup in the final Top 10 Shootout for Modified Saloon Cars, as Pieter Zeelie claimed his first King of the Hill title in the rear-wheel drive 2002 Toyota MR2 3.5 twin-turbo V6. After setting a time of 40.961 sec in the Class Finals, he produced 40.402 sec in the final shootout. 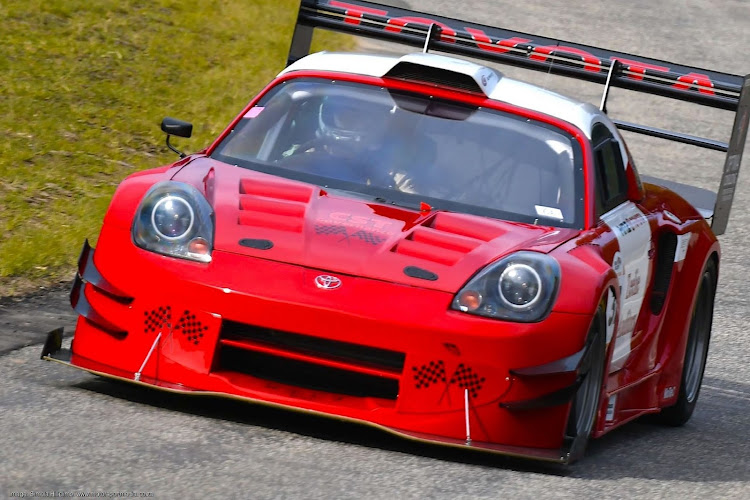 In the Modified Saloon Car class Pieter Zeelie claimed his first King of the Hill title in the Toyota MR2.   Picture: SUPPLIED

“It’s wonderful, the perfect run came in when it counted,” Zeelie said. “I was hoping for a podium but didn’t expect much more when competing against the likes of Franco Scribante, Wade van Zummeren and Wilhelm Baard. They are all definitely quicker in the Nissan GT-Rs, but only if all goes well, and that was the difference today as it all came together better for me today.”

Reigning King of the Hill Franco Scribante was considered a sure bet to repeat his dominance in the outrageous 2016 Nissan R35 GT-R after charging to a new Modified Saloon Car official record of 39.303 sec in the Class Finals — 0.039 sec quicker than his 2019 time. However, as the last car out of the blocks, a less-than-perfect final run saw him cross the finish line in 40.522 sec in the shoot-out, relegating him to second place.

Third place went to Charl Arangies with a time of 41.081 in the 2019 Lamborghini Huracán GT3 Evo.

The SABC will screen the Samola Hillclimb live at the weekend thanks to a four-year partnership between the public free-to-air broadcaster and event ...
Life
3 weeks ago

Single seaters and supercars are aiming to beat the 35.528-second benchmark in Knysna at the weekend
Life
3 weeks ago
Next Article

Isuzu’s new D-Max AT35 on show at UK expo

Isuzu’s new D-Max AT35 on show at UK expo