Kamui Kobayashi takes the chequered flag while teammates watch on, as both SA drivers retire 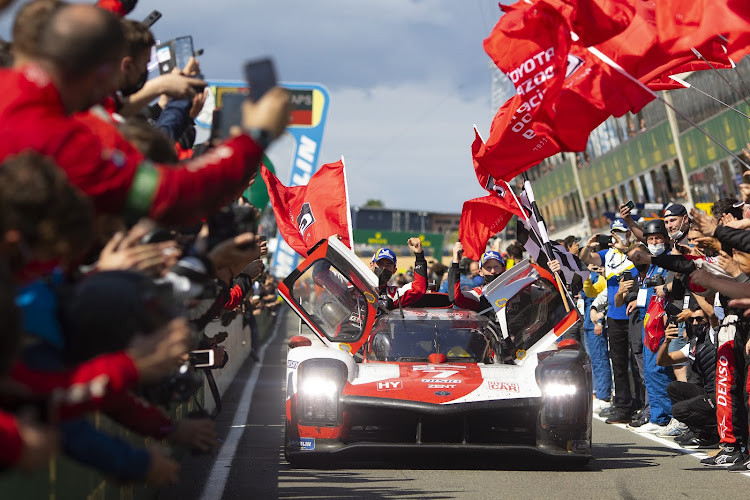 Celebrations as the victorious Toyota enters the pits. Picture: SUPPLIED

Toyota won the 24 Hours of Le Mans endurance race for the fourth consecutive year and with a one-two formation finish on Sunday as the number seven crew’s jinx ended in style at the Sarthe circuit.

“Now, finally,” gasped the former F1 driver as he crossed the line with the car having led the race through rain and shine.

The Japanese manufacturer’s number eight car — with Swiss Sebastien Buemi, Japan’s Kazuki Nakajima and New Zealander Brendon Hartley — had won the last three Le Mans but had to settle for the runner-up position two laps behind.

Kobayashi had qualified fastest in four of the last five Le Mans but until Sunday he and his teammates, the reigning world endurance champions, had yet to win the race.

“We had so many chances to win Le Mans but we always lost, and finally we won,” Kobayashi told record nine-times Le Mans winner Tom Kristensen, now working for Eurosport.

This year’s Le Mans, watched by 50,000 fans after racing behind closed doors in 2020, was the 89th edition and the first of the new Hypercar era, with Toyota lining up as clear favourites — albeit in a race where little is certain.

Only five Hypercars, the replacement for the old LMP1 category, were in the 61-car field but that is set to change with Peugeot entering the fray next year followed in 2023 by Audi, Ferrari and Porsche and more to come.

The wet start, after two extra laps behind the safety car on Saturday, saw plenty of collisions and spins early on.

The LMP2 honours went to the Belgian WRT team of Robin Frijns, Ferdinand Habsburg and Charles Milesi in the number 31 Oreca with AF Corse Ferraris winning the LMGTE Pro and Am categories.

The race in northwest France is due to return to its traditional mid-June slot next year.

Both South African drivers, Jonathan Aberdein in the LMP2 Oreca and David Perel in the GTE Am Ferrari, retired in the night.