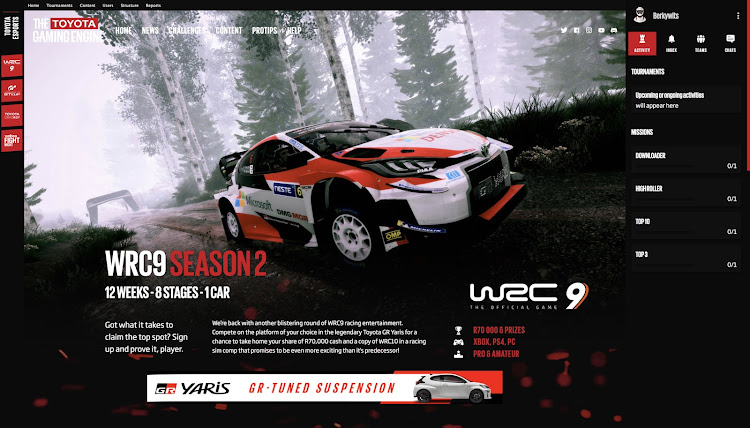 Gamers can compete in motorsport events like WRC 9. Picture: SUPPLIED

While the pandemic put the brakes on traditional sports, global esports and gaming saw an exponential rise in the last year and a half.

Toyota SA established its successful FIFA 21 and WRC 9 Toyota esports Challenges, and now the carmaker is launching its own purpose-built gaming platform — The Toyota Gaming Engine (TTGE) at TTGE.co.za.

Designed in partnership with African Cyber Gaming League (ACGL), TTGE is a hub for pro and amateur esport players. The platform allows enthusiasts to compete in motorsport events like WRC 9 (world rallying) and the tar-based TGR GT Cup.

TTGE will kick off later in August with entries opening for WRC 9 Season 2, with players able to compete against real-life Toyota Gazoo racers such as rallyist Guy Botterill and Dakar star Giniel de Villiers.

By registering an account on TTGE.co.za, players will be able to compete on their preferred system (Xbox, PS, PC, mobile or wearable tech) in world-wide multi- and single-player esports contests across some of the world’s biggest titles.

Members will be kept up to date with the latest gaming and e-sports news, as well as exclusive TTGE content including Pro Tips from local experts helping them up their game, highlights from pro and celebrity face-offs, and live events.

“Gaming is part of a world without borders and gives Toyota the opportunity to engage with a younger, more dynamic, audience,” says Glenn Crompton, vice-president of marketing at Toyota SA.

After Australian GP is cancelled, F1 drivers race against gamers in ‘all star’ virtual race
Life
1 year ago
Next Article