The iconic poster car is reimagined for a new era, and only 112 units will be made 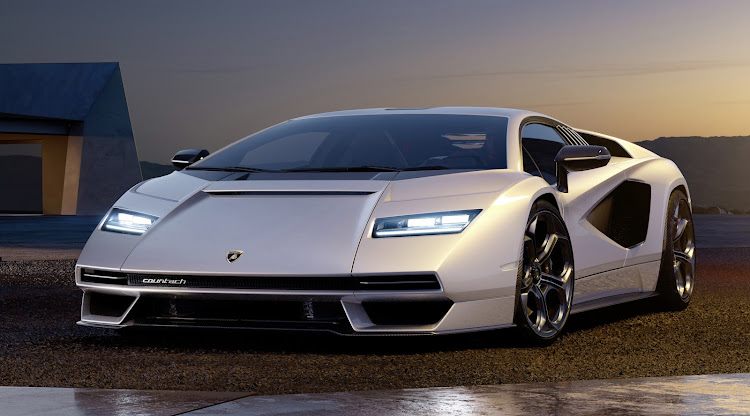 The new Countach will reach 100km/h in 2.8 seconds. Top speed is a claimed 355km/h. Picture: SUPPLIED

Lamborghini has resurrected the ultimate poster child for fans of fast cars. The Countach LPI 800-4 is an all-new, limited-edition production supercar that pays homage to the Countach’s status as a one of the most revolutionary whips in history.

“It imagines how the iconic Countach of the 70s and 80s might have evolved into an elite super sports model of this decade,” said Stephan Winkelmann, the president and CEO of Automobili Lamborghini, in a media statement about the car’s debut on August 13 at the Quail motorsports gathering in Carmel, California.

Built on an all-wheel-drive hybrid platform that combines a V12 engine with a 48v e-motor and supercapacitor technology, the modern Countach gets 574kW from its combustion engine and 25kW from its electric one, for 599kW total. According to Lamborghini, the car will hit 100km/h in 2.8 seconds and reach a top speed of 355km/h — numbers that decimate the nearly five-second sprint and 289km/h specs of its forbearer.

Named after an expression of surprise in the Italian Piedmontese dialect and pronounced “COON-tosh”, the scissor-doored, trapezoidal Countach is one of the very few Lamborghini models whose name isn’t related to bullfighting (the Espada is another).

As with the entire Countach family, there are four exhaust pipes; these connect within the carbon-fibre rear diffuser. Picture: SUPPLIED

Originally unveiled as a prototype at the 1971 Geneva Motor Show, the 5.0l V12 wedge was styled by the legendary designer Marcello Gandini and dubbed LP500. The wealthy approved — and filled Lamborghini order books with eager deposits on the novel design. By 1974, Lamborghini was producing the road-going Countach LP400.

Revolutionary elements for a production (not racing) car — its aluminium sheet metal body fitted over a tubular space frame, the dashboard design, the scissor doors, and even an early cruise-control system — quickly influenced multiple other models. The car also had horrible side- and rear-visibility, poor cabin ventilation, windows that were permanently half-shut, ponderous gears, and a near-impossible-to-park body shape, but enthusiasts weren’t deterred.

The LPI 800-4 at the Quail had a red-and-black-leather interior and in an exclusive Bianco Siderale paint colour with a whiff of pearlescent blue that evoked Ferruccio Lamborghini’s own Countach LP 400 S. Multiple other elements hark to its origins as well, such as hexagonal wheel arches and that distinctive Countach face: strong, flat lines along the front with a low rectangular grille and headlights. 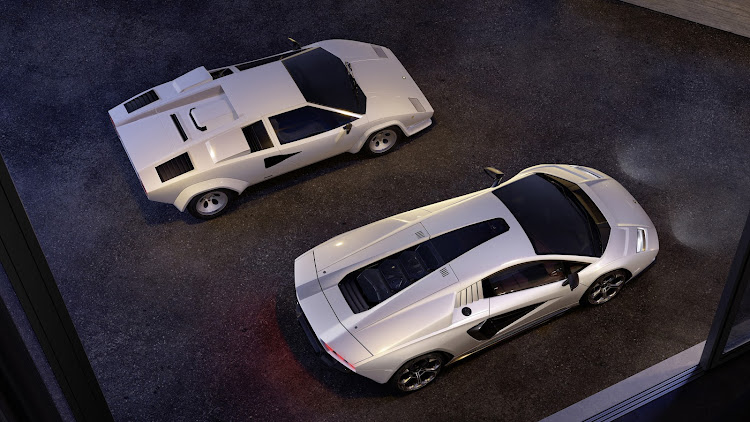 Then and now – the original Countach (top) sits next to it hybrid-powered successor. Picture: SUPPLIED

NACA ducts are cut into the side and doors, and a distinctive periscopio — a glass periscope of sorts built into a depression in the roof to aid visibility — runs across the roof to the rear of the car. As with the entire Countach family, there are four exhaust pipes; these connect within the carbon-fibre rear diffuser. Lamborghini added air scoops in the car’s prominent shoulders, which are embellished with the distinctive Countach slatted gills.

The monocoque chassis and all the body panels are in carbon fibre, which makes the Countach LPI 800-4 light, at 1,595kg. The most visible exterior carbon-fibre features are in the front splitter and around the front window and wing mirrors.

Today, a vintage Countach, according to Hagerty, is worth about $1.3m (roughly R19.15m) for a concours-worthy model. Examples in good but not the-best-of-the-best condition hover near $910,000 (roughly R13.4m). The periscopio LP400s are the most collectible Countaches. Lamborghini will make 112 of the hybrid Countach at a price of $2.64m (roughly R38.9m). Deliveries start worldwide in early 2022.

During the second half of the decade, Lamborghini plans an electric four-seater
Life
1 year ago