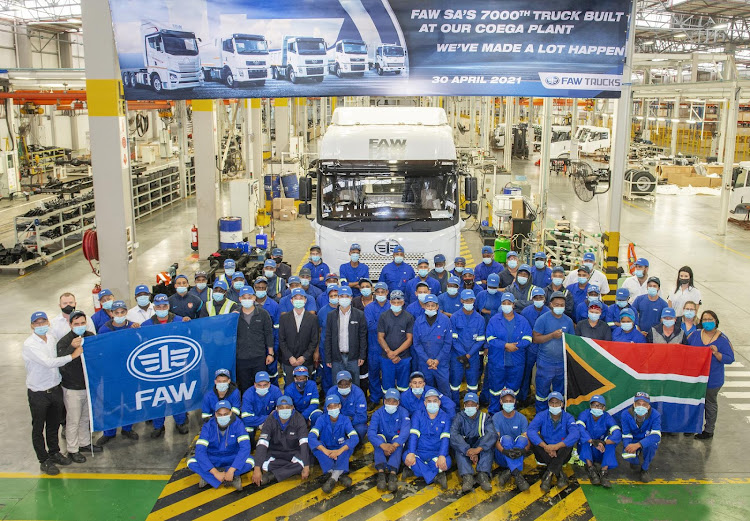 FAW Trucks recently reached a milestone with the 7,000th locally assembled vehicle rolling out of its Coega manufacturing plant near Gqeberha in the Eastern Cape.

It followed the Chinese brand setting a new sales record in the first quarter of the year by being the top performing brand in the heavy commercial vehicle segment for the first time.

The 7,000th vehicle to be produced at the factory was a JH6 28.500FT model, the largest of the truck tractors from FAW Trucks. It features a full floating extended-roof cab with an innovative flat floor design for optimal comfort and interior space.

Its 13l, six-cylinder common-rail turbocharged and intercooled diesel powerplant produces 370kW at 1,800rpm and 2,300Nm of peak torque at 1,400rpm.

Says Jianyu Hao, CEO of FAW SA: “This is an understandably proud moment for us. It reaffirms our commitment to the local market and is just reward for what is one of the largest investments made by a Chinese entity in this country.”

FAW entered the local market 27 years ago as an importer. The  first vehicle rolled off the Coega assembly line in July 2014.

The factory, funded by the China FAW Group Corporation and the China-Africa Development Fund, cost R600m and spans some 30,000m². This includes a training facility, a body shop and a paint shop. All units arrive in SA in semi-knocked-down form and are then assembled at Coega.

The facility has a production capacity of 3,000 units a year, scalable to 5,000 to be able to meet growing demand.

The collaboration aims to place 1,700 electric truck charging points across the continent
Life
1 month ago

The partnership accelerates the race to put automated heavy-duty trucks, with a carrying capacity exceeding 14,969kg, on the road
Companies
11 months ago