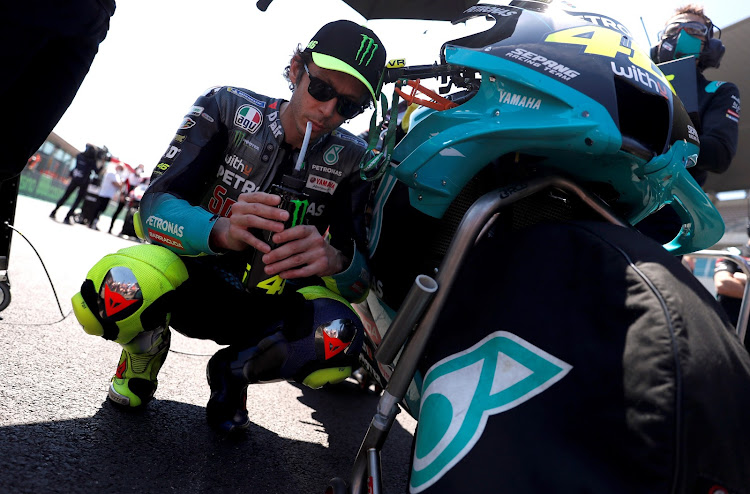 Rossi says one aim was to compete in the 24 Hours of Le Mans sportscar race. Picture: REUTERS

Valentino Rossi, one of the greatest and most charismatic of motorcycling champions, called time on his MotoGP career on Thursday and looked forward to a future in car racing.

The 42-year-old Italian, who races with the number 46 and is a nine-time world champion with seven titles in the top category, told a news conference at the Styrian Grand Prix in Austria that 2021 would be his last season.

“I decided to stop at the end of the season,” Rossi told a news conference at the Red Bull Ring.

“It’s difficult, it’s a very sad moment because it’s difficult to say and to know that next year I will not race with the motorcycle.

“I do this thing for more or less 30 years. Next year my life will change. But anyway, it was great, I enjoyed very much this long, long journey and it was really, really fun.

He said one aim was to compete in the 24 Hours of Le Mans sports car race.

Rossi is riding for the Malaysia-based Petronas Yamaha team but his form has faded. The veteran languishes 19th in this year's championship with a best finish of only 10th from nine races.

A showman on and off the bike, and famed for his post-victory antics, “The Doctor” last won a race in 2017 with Yamaha, in the Dutch TT at Assen.

The sport and his army of fans will miss him, the Italian still a crowd favourite with worldwide recognition and capable, in pre-pandemic times, of packing out his home races.

Yamaha hailed him as a living legend and GOAT (Greatest Of All Time) in a statement of thanks.

“I entertain a lot of people on Sunday afternoons,” said Rossi. “One or two hours on a Sunday when they don't think of anything and just follow my races.”

The only rider to have started 400 or more races, Rossi has 89 wins from the top category and 26 others from the junior 125cc and 250cc categories.

He has stood on the podium 235 times in his career, the first coming in Austria in 1996 with third place on a 125cc Aprilia.

“It is a difficult decision but I think that at the end in all sports, the results make the difference. In the end I think it is the right way,” said Rossi, who could have hired himself to race on with his own, new Saudi-backed Aramco VR46 team.

That team, using Ducati bikes, already has Rossi's half-brother Luca Marini lined up and the sponsors were keen for them to pair up.

Rossi joked that he had made himself an offer, and had thought seriously about it, but it was not the right move for just one season and it was time to do something different even if he will remain a paddock regular.

“I feel that I am a rider or a driver for all life long,” added the Italian, who tested with the Ferrari Formula One team several times between 2004 and 2010, has competed in rallies and started out racing go-karts.

“I'm a little bit sad to not win the 10th championship,” he said. “I think that I deserve (it) for my level and my speed. I lose two times in the last race. But it is like this. I can't complain about the result of my career.”

Three times a runner-up in the top category, Pedrosa retired from full-time racing in 2018
Life
1 year ago