The F1-derived AMG One is the apex predator of Mercedes-AMG’s electrified range. Picture: SUPPLIED

Mercedes-Benz is getting ready to go electric across all its model ranges by the end of the decade. From 2025, customers will be able to choose an all-electric alternative for every model the company makes — including high-performance AMG versions.

Wait, AMG? Purveyors of growling V8 petrol cars? Yes, it’s part of the industry-wide move to less-polluting, electrically powered vehicles in the effort to combat global warming. And there will be four-cylinder cars with AMG badges.

But before high-performance petrolheads recoil in horror, AMG plans to rock down to electric avenue with its signature performance and character intact, including the all-important sound.

Mercedes’s performance division is creating two types of electrified sports cars that are kinder to the environment: petrol-electric hybrids and full-electric vehicles.

Mercedes-AMG’s most powerful hybrid machine is the one with the smallest engine: the AMG One hypercar, which uses the same 1.6l V6 petrol-electric drivetrain as Lewis Hamilton’s multiple championship-winning Formula One car.

But AMG has built its reputation on thumping big V8 engines and these will continue to form part of the equation. Pairing an electric motor with the biturbo petrol 4.0l V8 used in today’s snarling AMG cars, the AMG Performance Hybrid drivetrains will provide speed, sound and at least a casual nod to reducing CO2 emissions.

With more than 600kW and 1,000Nm of torque available, a sub three-second 0-100km/h sprint will be possible depending on the vehicle this powertrain is used in, and that lusty eight-cylinder sound will continue to thrill. One of the first recipients of this drivetrain will be the upcoming Mercedes-AMG GT 73e four-door sports coupé.

Lower down the totem pole will be four-cylinder AMG Performance Hybrids, using a tweaked version of the 2.0l petrol turbo powering the world’s fastest hatchback: the Mercedes-AMG A45 S. 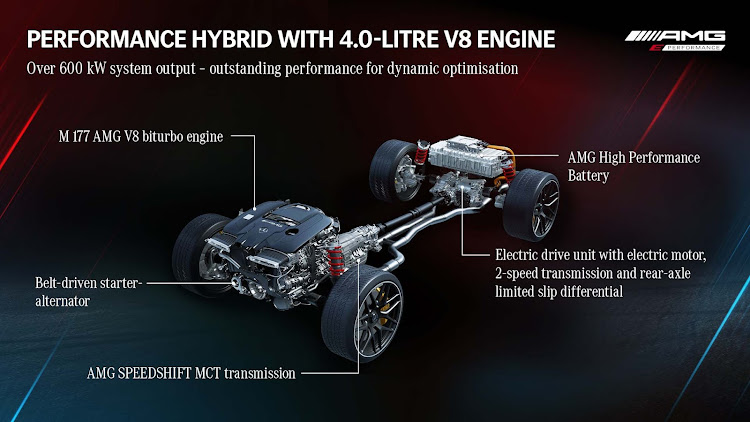 With more than 600kW and 1,000Nm of torque, a sub three-second 0-100km/h sprint will be possible depending on the vehicle this hybrid powertrain is used in. Picture: SUPPLIED

This petrol-electric drivetrain, with all-wheel drive and a nine-speed automatic transmission, will replace V8 power in the next-generation Mercedes-AMG C-Class. Halving the engine size and number of cylinders is controversial, but performance hounds will be well catered for with 330kW supplied by the petrol engine and 150kW by the electric motor, the combined power outpunching today’s non-hybrid V8 AMG models.

Though it won’t growl as emotively as the current eight-cylinder C63, the hybrid system does partially make up for it by providing more instant response. The electric motor acts directly on the rear axle and can convert its muscle more directly into propulsion for extra boost when pulling off or overtaking.

At AMG’s Affalterbach headquarters the vehicles will get tweaks to their performance, chassis, brakes, and even sound. They will look the part with signature AMG features like a vertical-louvre radiator grille and more aggressive bodywork, and sporting interior touches including exclusive AMG seats and AMG-specific functions for the MBUX displays.

Athletic handling will be taken care of by fully variable all-wheel drive and air suspension. Performance will be on par with today’s most powerful V8 biturbo AMG models, with 0-100km/h sprints of well under four seconds and top speeds of 250km/h, but with completely lag-free, linear acceleration.

The hallmark AMG sound will also be part of the package using speakers and sound generators, even though purists may deride these digital decibels as “fake” compared to the analogue roar of a petrol-sucking V8.

Progress can be painful for the type of people who booed Bob Dylan when he switched from an acoustic to an electric guitar for the first time, but the times they are a-changin’.

Mercedes-AMG, like many others, is building high-performance cars that fit the planet-saving imperative. Many of today's most muscular supercars are electrically powered, and having personally experienced the pull-your-face-back acceleration of Porsche’s battery-powered Taycan Turbo S, I can say the future of electric sports cars looks bright.