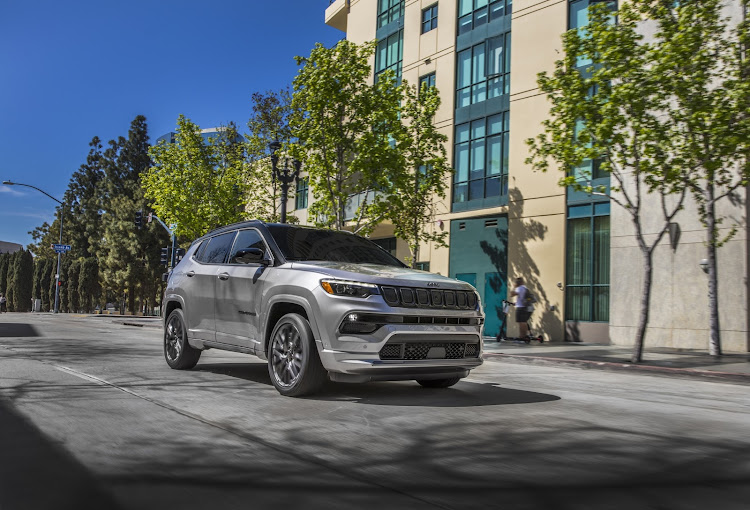 With the updated Compass that was unveiled recently at the Chicago Auto Show, it was a good time for Jeep to take stock of how to progress it in a highly competitive compact SUV market.

The Jeep Compass made its SA debut back in 2007 and has been quietly finding owners looking for something a little different within a market with plenty alternatives. A total of 9,574 units have been sold since 2007 and the second-generation version was launched here in 2019.

For the most part the 2022 model seemingly subscribes to new market expectations. It’s said to be the most connected and technically advanced yet with innovations in luxury, safety and driving autonomy.

It ushers in new levels of comfort and functionality, with premium styling and features inside. Picture: SUPPLIED

There is also standard fitment of new tech such as wireless Apple CarPlay, Android Auto and the Alexa virtual assistant, TomTom navigation with predictive search and voice command, Bluetooth and a 4G LTE Wi-Fi hotspot that connects up to eight wireless devices.

The company says it has 75 safety and security features in total, including a new highway assist semi-autonomous driving system. New suspension tweaks aim to deliver a smooth ride and poised handling, including upgrades to its steering system for sharper on-road responsiveness.

Power is provided by a 132kW and 232Nm 2.4l four-cylinder engine with start/stop for both 4x2 and 4x4 models. It can be mated to either a nine or six-speed automatic transmission.

A Jeep fundamentally must have off-road capability, and the company says this is courtesy of two intelligent 4x4 systems, each of which can send 100% of available torque to any one wheel.

Both systems get low-range gearing in conjunction with drive modes of Auto, Snow and Sand/Mud while the top-tier bushwhacker Trailhawk model gets a 30° approach angle, 24° breakover angle and a 34° departure angle benefits from an extra Rock mode and hill-descent control.

“The new 2022 Jeep Compass ushers in new levels of comfort and functionality, with premium styling and craftsmanship inside and out. The Compass stays true to its benchmark 4x4 capability and on-road dynamics, but with even more refinement and precision,” says Jim Morrison vice-president of Jeep Brand North America.

The 2022 Jeep Compass is scheduled to arrive in Jeep showrooms in the US late in 2021.

Local introduction is confirmed and more information will be relayed closer to the time. ​

Though newer CX-30 steals the styling limelight, the older CX-5 is a more family-friendly vehicle
Life
11 months ago