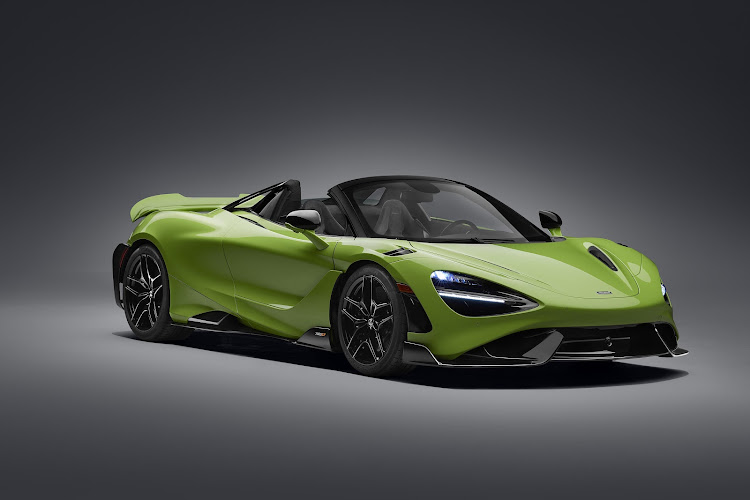 An electrically operated carbon fibre hard top takes 11 seconds to open at driving speeds of up to 50km/h. Picture: SUPPLIED

McLaren has taken the wraps off its most powerful drop-top car to date: the 765LT Spider.

It’s the convertible cousin of the 765LT coupé unveiled last year, and is sold out, with just 765 of the roofless versions will be built to ensure exclusivity.

The British firm says the Spider carries over the coupé’s dynamic and aerodynamic DNA with no structural compromise and a minimal 49kg weight increase — primarily from the retractable hard top and its operating mechanism. The 765LT Spider tips the scales at 1,388kg, which McLaren says is about 100kg lighter than its closest competitor.

The Spider uses the same carbon-fibre monocoque chassis as the coupé, which was stiff enough to require no additional bracing, though there are carbon-fibre structural supports at the rear providing rollover protection.

The electrically operated carbon fibre hard top takes 11 seconds to open at driving speeds of up to 50km/h, bringing the McLaren’s occupants more up close and personal to their surroundings, not to mention enhancing the soundtrack of the V8 engine through the quad-exit titanium exhaust system.

The convertible roof plays an integral role in the structure, creating a full carbon-fibre shell when closed. Because it is a single-piece panel with no central seal, headroom is improved, while the extended length of the roof panel allows the tops of the A-pillars to be further forward, enhancing the sense of space and easing ingress and egress.

The Spider is mechanically identical to the coupé, with a mid-mounted 4.0l twin-turbocharged V8 engine producing 563kW (which equates to 765hp as per the badge) and 800Nm of torque. Performance is the same too, with a 0-100km/h time quoted at 2.8 seconds, the quarter mile at 10.0 seconds, and the top speed a hair-ruffling 330km/h.

An LT is the most extreme expression of a McLaren you can get —as close to the edge as possible in terms of performance and exhilaration.

Like every LT, the new Spider is designed to excel on track; however, the extra dimension of theatre and drama offered by the convertible roof also makes it an even more immersive and compelling car to drive on the road, says Mike Flewitt, CEO of McLaren Automotive.

The McLaren 765LT Spider will be available in SA from Daytona. Local pricing isn’t confirmed but the UK price is £310,500 (R6.57m) before import duties.

Ferrari's new 296 GTB is equipped with a hybrid technology system that's kinder to the environment while it maintains the high-performance legacy of ...
Life
1 year ago

During the second half of the decade, Lamborghini plans an electric four-seater
Life
1 year ago
Next Article