At 600km/h the maglev would make the 1,200km journey from Beijing to Shanghai in just 2.5 hours 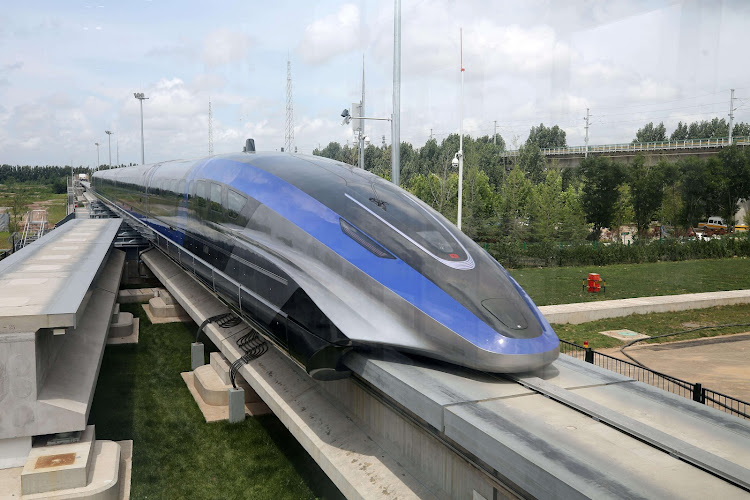 China unveiled a maglev train this week that is capable of reaching 600km/h, according to state media.

The maximum speed would make the train, developed by state-owned company CRRC Corporation and manufactured in the coastal city of Qingdao, the world’s fastest land vehicle.

Using electromagnetic force, the maglev “levitates” above the track with no contact between body and rail.

China has been using the technology for almost two decades on a limited scale. Shanghai has a short maglev line from one of its airports to town.

While there are no inter-city or inter-province maglev lines yet in China that could make good use of the higher speeds, some cities including Shanghai and Chengdu are conducting research.

At 600km/h, it would take only 2.5 hours to travel the 1,200km from Beijing to Shanghai — including waiting times — compared with three hours by plane or 5.5 hours by high-speed rail.

Countries from Japan to Germany are also looking to build maglev networks, though the high costs involved and their incompatibility with current track infrastructure remain hurdles to rapid development.

The Hyperloop system promoted by Elon Musk could potentially move people or objects at speeds of more than 1,200km/h, using a sealed tube with low air pressure through which a pod may travel substantially free of air resistance or friction.

The capsule, at 32m long and weighing in at five tons, is a peak at the future of high-speed travel
Companies
2 years ago

Solar-powered transport system would shoot passengers in capsule through low-pressure tube at up to about 1,280km/h SAN FRANCISCO — Billionaire US ...
Archive
7 years ago