Besides its mind-blowing speed, the bike’s drag-reducing design could double its range 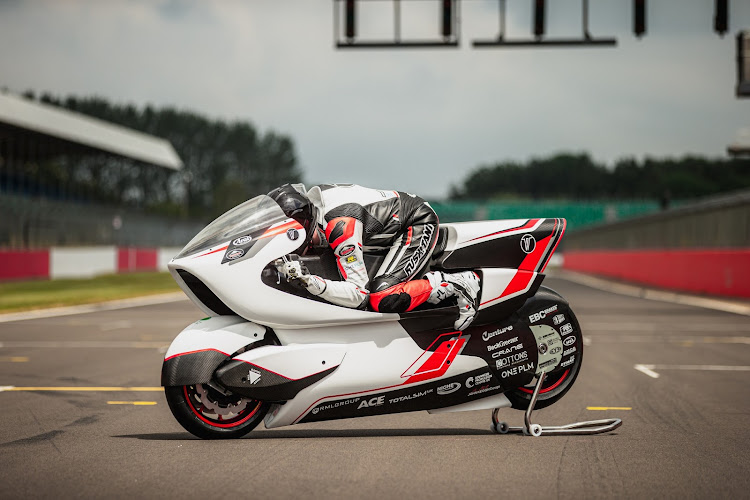 A central aerodynamic duct through the bike is said to greatly improve speed and range. Picture: SUPPLIED

If you want to demonstrate a new aerodynamic concept’s prowess the best thing to do is to make it go as fast as possible.

So says Rob White, founder and CEO of UK-based White Motorcycle Concepts, who aims to break the electric motorcycle world land-speed record on a radical new prototype, dubbed WMC250EV. While the name could be catchier, its weird design certainly grabs attention as does the speed it’s capable of. The battery-powered motorcycle is said to reach more than 400km/h thanks to a secret weapon — a tunnel.

It’s an ultra-low drag system called V-Air with a large centre duct that forces air through the motorcycle, rather than around it. Speed is more about aerodynamics than power, and V-Air is said to reduce the WMC250EV’s wind resistance by as much as 69% compared with regular superbikes, based on the results of wind-tunnel testing.

White, an engineer who has worked on Formula One, Le Mans, V8 supercar and World Endurance Championship race teams for more than 25 years, will attempt to set a 250mph (402km/h) land speed record for electric semi-streamlined motorcycle at the Bolivian salt flats in 2022.

The current 366.94km/h record was set in November 2020 on a Voxan Wattman ridden by former MotoGP rider Max Biaggi. Built by the Monaco-based Venturi Group, the Voxan Wattman has a 270kW electric motor. White’s machine has an output of just 100kW, but he’s confident its radical aerodynamics will more than compensate.

“We created the WMC250EV high-speed demonstrator, the most radical version of this [V-Air] concept, to challenge for the world land-speed record,” White said. “It’s electric, as that is the pre-eminent zero emissions power source at the moment, but as the aerodynamic concept provides efficiency benefit, it could just as easily be hydrogen or any other future power source.”

The prototype was more than two years in the making. The machine uses motors at the front and rear wheels, which harness regenerative braking energy to increase range. Together with the aerodynamics, it could double a regular electric bike’s range from a given battery size. With range limitations being the main concern of electric-powered vehicles, the WMC250EV solves a major problem.

The WMC250EV also has an F-Drive final drive system to boost power and enhance efficiency; a technology that could be retrofitted to improve existing road bikes.

Speed is just the beginning, and the concept machine’s more wide-reaching implication is the impact it can have on vehicular energy efficiency, White said.

“The records are all Champagne but actually are the insignificant part of the story,” he said. “While this technology allows you to go faster, it also allows you to go much further for the same amount of energy. This has a direct and tangible benefit on CO² reduction.”

WMC is building a practical application for the V-Air technology in a 300cc three-wheel hybrid scooter, the WMC300FR, which reduces drag by 25%, resulting in a claimed 18% improvement in fuel efficiency.

With lightning fast acceleration and eye-watering prices, these electric bikes usher in a new era
Life
3 months ago

Suzuki’s Hayabusa is back

New 2021 hyperbike is down on power but quicker off the mark, says Suzuki
Life
5 months ago