Little pocket rocket gets 198kW of power, all-wheel drive and a host of chassis upgrades 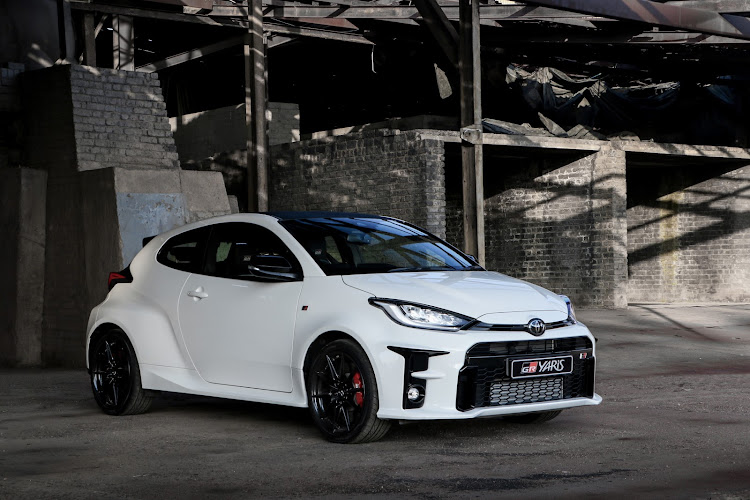 Dynamite comes in small packages, and no car expresses this adage better than the new Toyota GR Yaris, a rally-bred but street-legal hot hatchback.

The turbocharged, all-wheel drive car has arrived in SA in a choice of two models: the GR Yaris priced at R606,600 and the more hardcore GR Yaris Rally (R715,600). The latter has a Circuit Pack which endows it with a Torsen limited-slip differential on both the front and rear axles, performance-tuned suspension, revised power-steering assistance and an upgrade to 18-inch BBS forged alloy wheels shod with Michelin Pilot Sport 4s tyres.

The car was co-developed by Toyota Gazoo Racing and Tommi Mäkinen Racing, Toyota’s partner in the WRC. Besides serving as the official model for development of the next Yaris WRC car, it is also aimed at customers looking to compete in local rally competitions or track days. It’s Toyota’s second global GR model, following the GR Supra coupe.

The focus was on optimising the aerodynamics, weight distribution and power-to-weight ratio as evidenced by the91mm lower roofline,  positioning the engine closer to the centre of the car and inserting the battery in the boot.

Power comes from a three-cylinder 1.6l petrol turbo that fires 198kW and 360Nm to both axles via a six-speed transmission (manual of course - this car is for purists). An integrated oil-cooler and high-volume cooling system help maintain engine operating temperatures during enthusiastic driving.

A high-position gear lever - a la rally style - is set close to the steering wheel to aid the driver make quick shifts. It features a short and light shift throw, while a motorsport-style clutch provides smooth yet solid engagement.

The driver can adjust the four-wheel drive system to suit the driving situation using a 4WD mode dial switch. In normal mode the base front/rear torque distribution is 60:40; in Sport mode the balance shifts to the rear with a 30:70 split; and in Track mode the setting is 50:50.

The three-door body shell is made from lightweight materials including carbon fibre polymer and aluminium, while the new platform allows for a wider rear track, new double-wishbone rear suspension system, and body reinforcements.

Although the GR Yaris is based on the new European Yaris model, it has a unique design with a three-door body. Apart from its lowered roofline and wide track, the car’s racing vibe is heightened by a grille with a signature GR “functional matrix” design, and a large rectangular lower grille with a honeycomb mesh.

The grille is flanked by large vertical inlets for the brake duct and intercooler, with circular LED fog lights. 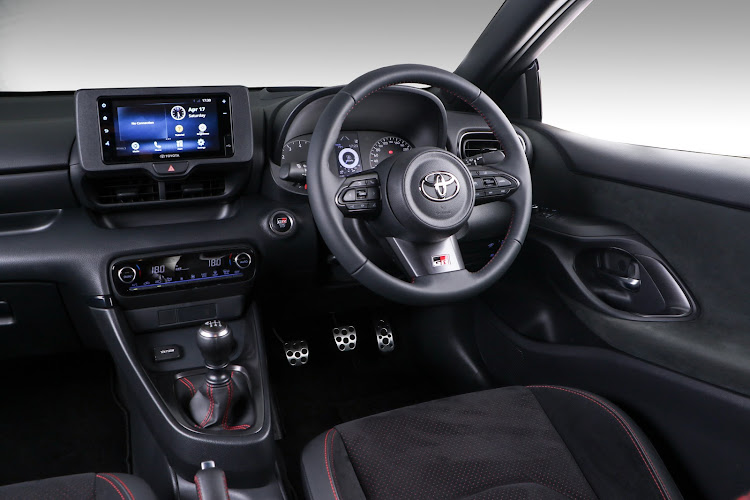 The cabin has sporty décor and an easier-to-reach gear shifter. Picture: SUPPLIED

The prominent lower spoiler has a downforce-generating shape, with a raised centre section that controls the flow of air beneath the vehicle. At the rear, the tapering of the roof and rear pillars and the addition of the deep, high-mounted spoiler, enhance downforce. The wide track and flaring of the rear wings emphasise the car’s wide and low silhouette.

Interior sporting flourishes include red stitching and GR branding throughout the cabin, including on the three-poke steering wheel. A twin-hooded binnacle pairs analogue instrumentation with a 4.2-inch TFT colour multi-information display which relates information on the all-wheel drive system and turbo pressure.

The standard GR Yaris has premium textured fabric upholstery with the Rally version laying on a synthetic leather/Alcantara combination paired with Alcantara door inserts. A special WRC commemorative plaque is fitted to the centre console of each GR Yaris.

The car’s ability to be thrashed around circuits and rally stages is further enabled by high-performance brakes with large, grooved front discs and four-pot callipers.

The Rally version also gets a head-up display, the Toyota Safety Sense (TSS) active safety suite with features like auto high beam and adaptive cruise control, and active noise control which amplifies the engine sound by cancelling out opposing frequencies. In addition to ABS brakes, both models have tyre pressure monitors.

Perhaps too much power for a front-wheel drive, but this final GTI makes a statement
Life
9 months ago

Why own a car when you can subscribe instead?

Why own a car when you can subscribe instead?