New Honda is Fit to fight in the compact segment

Meeker styling and improved visibility for renamed Jazz, but hybrid model is not all it is cut out to be 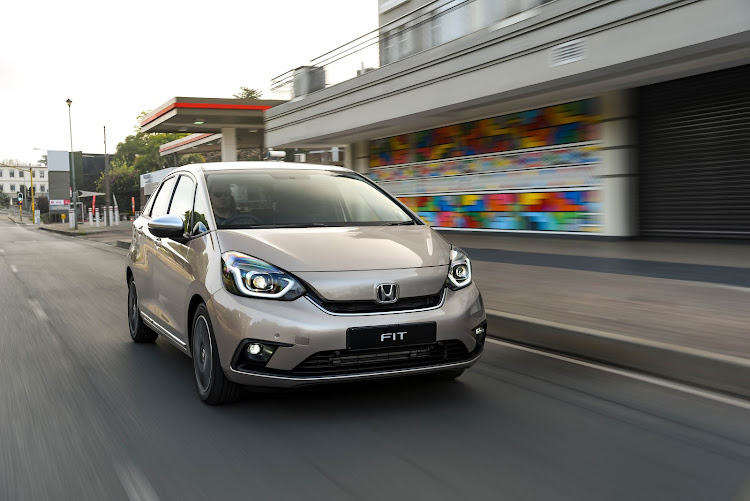 The new Fit is the Honda formerly known as the Jazz, and it’s been launched in SA in petrol and hybrid variants looking to appeal to existing Jazz fans as well as poach buyers from other brands.

It looks poised to make some conquest sales with a few standout features, though not necessarily because it offers the only hybrid model in the B segment, of which more later.

Honda is hoping the car will find a good fit with lifestyles that call for additional loading space, and it retains the best-known feature of previous Jazzes: rear “magic seats” that are able to flip up like cinema chairs to accommodate tall items such as pot plants or folded prams.

This feature gives the compact hatch a unique selling point in a competitive segment that includes cars such as the Volkswagen Polo, Ford Fiesta, and Hyundai i20. Flipping up the seat cushions and clicking them into place is simplicity itself, and there are no potentially fingernail-breaking levers to wrestle with.

When folded back down those rear seats offer impressively spacious passenger room in a car that has grown 88mm in length. In terms of space and practicality, the Jazz — sorry Fit — has one of the best games in town.

It also has the best visibility, not only in its class but possibly of any car, thanks to an enlarged windscreen and thinner A-pillars. Along with its large side windows this monobox Honda provides a truly airy, panoramic view, though the flipside is that one needs to frequently fiddle with the sun visors to prevent being blinded.

The narrower A-pillars, Honda points out, do not affect the car’s structural integrity as crash forces are redirected elsewhere. In fact, the Fit has improved body rigidity and better collision safety, and all versions come standard with six airbags, ABS brakes, and stability control.

Styling-wise the new Fit is divisive. The edgier, Civic-inspired looks of the old Jazz have been replaced by a meeker facade with smooth contours and Bambi-like face. One is almost tempted to tickle it under the chin and go “aww”.

Interior styling has been reinvented with a cleaner, more minimalist look. The uncluttered dashboard has a slim instrument panel extending the length of the cabin, and the dashboard visor is deleted to enhance the driver’s panoramic view.

The dashboard is hard plastic but there are soft-touch materials for all the human touchpoints throughout the cabin, and overall the interior has a neat, good-quality ambience.

A new infotainment system features a simpler, more intuitive LCD touchscreen interface to minimise driver distraction, and physical controls have been reinstated for key functions such as heating and ventilation.

There are USB charging ports for smartphones, which connect to the infotainment via Android Auto and Apple CarPlay, the latter available via wireless connection. 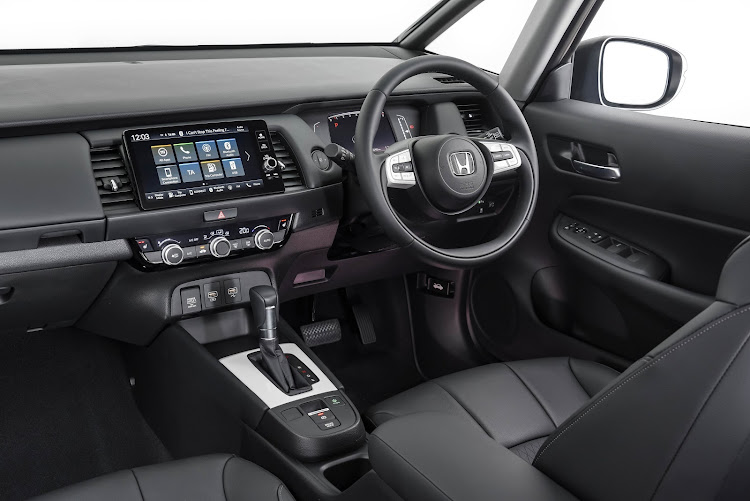 Three equipment grades and two power plants are on offer in the four-model range. Carried over from the old Jazz is the 1.5l normally aspirated I-VTEC petrol engine with outputs of 89kW and 145Nm. New to the line-up and arriving in October as the flagship model is the e:HEV hybrid which pairs a 1.5l petrol engine with two electric motors for a total 80kW and 235Nm, and automatically switches between three modes: full petrol, full electric, or hybrid.

Combined with a 0-100km/h time of 9.4 seconds and a 175km/h maximum speed, Honda claims the hybrid sips just 3.7l/100km, making it theoretically an exciting prospect for saving on the fuel budget. In reality, it’s not as cut-and-dried and will depend on where the car is driven.

The 1.5 petrol and the hybrid I drove at the launch both averaged about 6l/100km when driven in a combined cycle on urban and open roads. It was only in stop-start urban driving, where electric mode was more frequently employed, that the hybrid had an advantage; the best we managed with an extremely light foot was 4.2l/100km. The hybrid makes more sense for drivers who spend most of their time in city confines, but any fuel savings will be tempered by the car’s hefty R469,900 price tag. 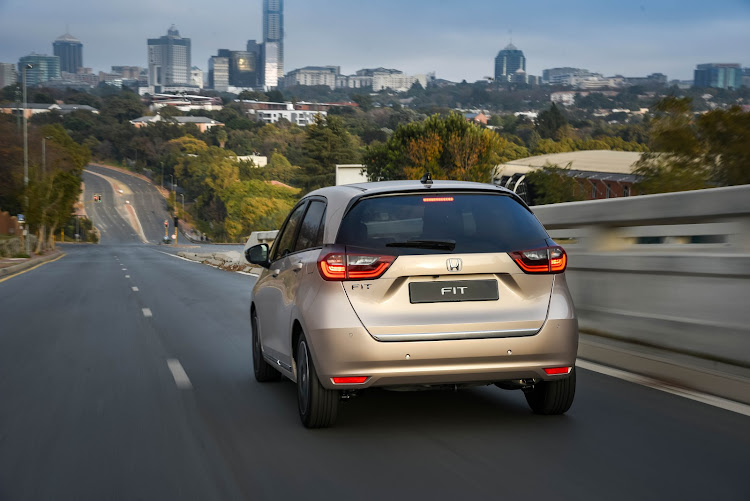 All round I preferred the nonhybrid version. Not only is it substantially cheaper and has similar fuel economy on the open road, but it’s more refined. The hybrid’s petrol engine revs high and sounds more strained when the throttle’s pressed hard. The Fit petrol models are only available as a CVT, which is a dirty word to some, but with its simulated shifts it felt similar to a regular automatic and didn’t go into the dreaded “drone zone” of some of its ilk.

The hybrid also has no spare wheel in the boot due to the space being taken up by electric drivetrain components; the petrol versions have a spacesaver spare. Luggage capacity in the petrol Fit is 309l (1,210l with the rear seats folded) and the hybrid offers 298l-1,199l.

Engines aside, one of the highlights of driving the Fit are its neat driving manners. New suspension geometry and increased body rigidity deliver a smooth, not-too-choppy ride with surprisingly fleet-footed agility for the little hatch.

Affordable four-door starts at R225,995 and doesn't skimp on features
Life
7 months ago

New Hyundai i20 lays on more style and power