SUV king of the Nürburgring boasts the marque’s most powerful V8 — and a R3.35m pricetag 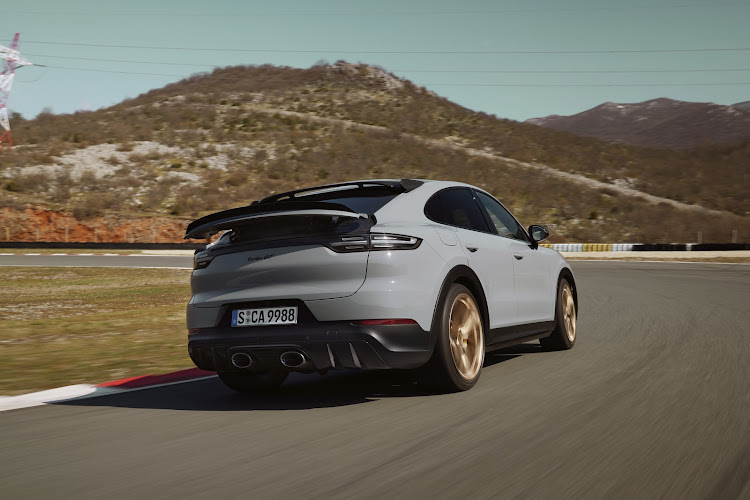 On June 14, Porsche set a 7:38.925 lap record for SUVs at the Nürburgring in an unnamed Cayenne flagship model.

The variant has now been identified as the Cayenne Turbo GT and its technical details and price have been revealed.

When the car lands in SA in the fourth quarter, it will carry a R3,350,000 pricetag, considerably higher than the R2,354,500 Audi RS Q8, which it demoted to Nürburgring’s second-fastest SUV by four seconds.

The Porsche’s muscle is supplied by a twin-turbo 4.0l V8 with outputs of 471kW and 850Nm; that makes it Porsche’s most powerful V8 and it’s 67kW and 80Nm stronger than the Cayenne Turbo, which has until now served as the range-topping model.

With these outputs the Cayenne Turbo GT, available exclusively in coupé guise, moves further up the sports SUV ladder against rivals such as the 478kW/850Nm Lamborghini Urus, the 467kW/900Nm Bentley Bentayga, and 522kW/875Nm Jeep Grand Cherokee Trackhawk.

The Cayenne Turbo GT isn’t just about pure muscle, however. When test driver Lars Kern set the Nürburgring record, he also had the benefit of the vehicle’s tweaked chassis, which rides 17mm lower on air suspension that is stiffened by 15%.

To improve this hefalump’s track-taming prowess the dampener characteristics of the Porsche Active Suspension Management (PASM) have been adapted, as have the power steering, rear-axle steering, and the Porsche Dynamic Chassis Control (PDCC) active roll stabilisation system. 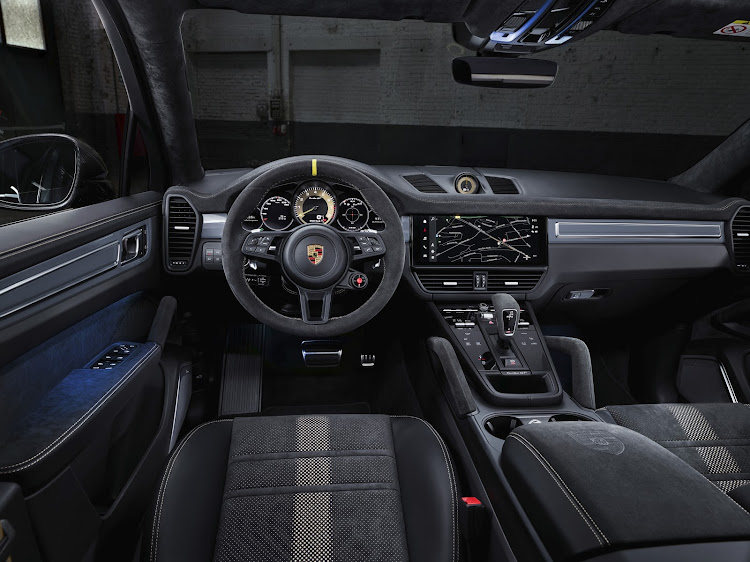 Sporting swagger inside the cabin includes additional Alcantara trim, and two sports seats in place of a bench at the rear. Picture: SUPPLIED

The result is improved roll stability and roadholding, as well as a more precise turn-in at higher cornering speeds. In line with this, the Porsche Torque Vectoring system allows higher torque bias ratios. The optimised front axle also improves handling. The front wheels are wider than the Cayenne Turbo’s and negative camber has been increased to give the new 22-inch Pirelli P Zero Corsa performance tyres — specially developed for the Turbo GT — a larger contact patch. Fade-resistant ceramic composite brakes come standard in this track-focused Cayenne.

Porsche has also upped this SUV’s sporting game with a faster-shifting eight-speed Tiptronic S transmission and a modified Porsche Traction Management (PTM) system. The titanium sports exhaust system, with its central tailpipes, is unique to the Cayenne Turbo GT and weight saving is achieved through the omission of the centre silencer.

Carbon side plates on the roof spoiler are unique, as is the adaptively extendable rear spoiler’s lip, which is 25mm larger than the Cayenne Turbo’s, to increase downforce at top speed by as much as 40kg.

Sporting swagger inside the cabin includes additional Alcantara trim, two sports seats instead of a bench at the rear, and a yellow 12 o’clock mark on the sports steering wheel. Eight-way sport seats feature perforated centre panels in Alcantara, contrast accents in Neodyme or Arctic Grey and “Turbo GT” lettering on their headrests.

The new Cayenne Turbo GT is available to order now.

Italy’s rapid new hellraiser has arrived, and we got to drive one of the first units in SA
Life
2 years ago
Next Article