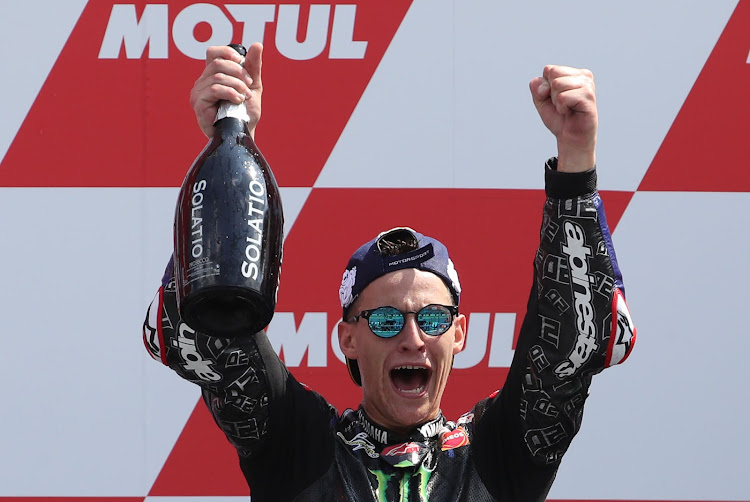 Bengaluru — World championship leader Fabio Quartararo cruised to his fourth win of the season at the Dutch Grand Prix on Sunday, leading a Yamaha one-two ahead of pole-sitter Maverick Vinales in Assen.

After dominating qualifying and practice sessions, both Yamaha riders started at the front of the grid but were stunned by Ducati’s Francesco Bagnaia, who had taken a surprise lead by the end of the opening lap.

Quartararo struggled to use Yamaha’s corner speed to his advantage in the early stages but finally made a move stick on lap six to pick off Bagnaia, before opening up a three-second lead over the chasing pack.

Bagnaia’s challenge faded after he was given a long-lap penalty for exceeding track limits, allowing Vinales to recover from a slow start and take second place.

Though Vinales reduced the gap to 2.4 seconds, Frenchman Quartararo was always in control.

Vinales returned to the podium for the first time since winning the opening race of the season in Qatar, with reigning world champion Joan Mir finishing third after working his way through from 10th on the grid.

Quartararo struggled to connect with a golf ball on the sidelines in a bizarre postrace celebration.

The golf swing might need a bit of work @FabioQ20!!! 😂#DutchGP 🇳🇱 pic.twitter.com/UF5glNmElV

Yet nothing could dampen his spirits as he enters a six-week summer break with a 34-point advantage over nearest challenger Johann Zarco of Pramac Ducati in the championship race.

“I’ve trained to hit the ball a bit higher on the range but today it was tough,” the Frenchman said of his golf swing.

“This one was a really tough race because I was struggling so much to overtake Pecco [Bagnaia]. I struggled a bit with my right arm and I couldn’t go as fast as I could.

“But I can be happy today because of the battle with Maverick. He won on Saturday but the points arrive on Sunday.”

Zarco has yet to win a race this season but his fourth place gave him a sixth top-five finish of the season.

SA’s Brad Binder finished 12th after qualifying 21st. The KTM rider is ninth in the championship.

The MotoGP season resumes with a double-header in Austria with the Styrian Grand Prix on August 8.

It is the multiple world champion’s first victory since injury, while SA's Binder finishes fourth
Life
11 months ago