Michael Taylor drives the new C200 at its world launch in Immendingen, Germany 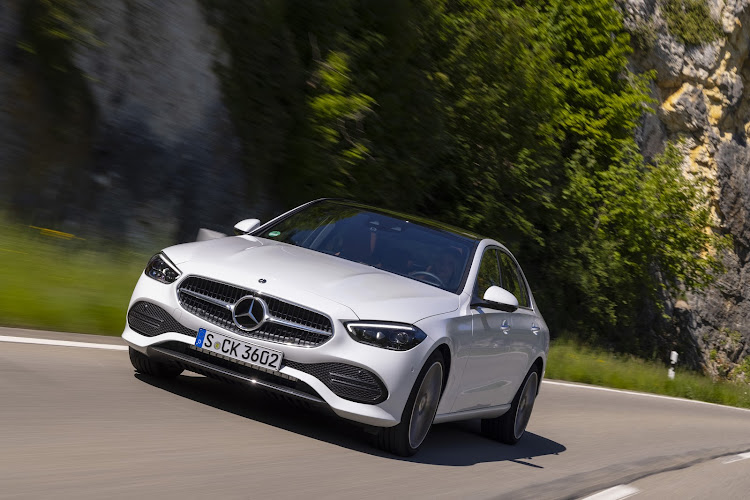 The chassis is a sublime combination of ride, handling and silence. Picture: SUPPLIED

The days when the Mercedes-Benz C-Class felt like a very mature car are back, with the latest generation C200 returning Benz’s biggest-selling sedan to its roots.

There will be a price to pay for this, and all of the C200’s new technology, and that is a farewell to six- and eight-cylinder power.

It’s worth paying, with 48V mild-hybrid boosting filling any torque holes, but there are times when six-cylinder smoothness would sure help.

While there has not been a confirmation, the suspicion is that the C200 will march at least a few rand upwards from its current price position.

Based on the S-Class’s architecture, the C200 and its siblings can be fitted out with an extraordinary array of comfort and safety features. There are new LED headlights, for example, and the option of a set of Digital Light headlights with 2.6-million pixels.

Even the entry-level digital instrument cluster for the driver is 10.25 inches, while there’s a 12.3-inch option as well, and an upgraded head-up display. The vertical central multimedia screen starts at 9.5 inches, though it can be upped to 11.9 inches, and is tilted towards the driver.

Mercedes has given the screens some deep thought, and there are three display styles for the instrument cluster and three other modes to use, too.

While the MMI is a touchscreen unit and can also be controlled from the steering wheel, it’s in the voice-control that the C-Class has taken its greatest strides forward via the “Hey, Mercedes” command.

It’s all run via a central processing system that now accepts over-the-air updates, and the MBUX even has fingerprint recognition to speed up its understanding of who’s driving the car.

The focus for Mercedes-Benz was keeping the C200 out of collisions in the first place — and taking more steps towards improved assisted driving — but still engineering for them just in case.

The electronic assistance systems are rampant in the C200, and they start with the Active distance assistance (distronic) system, which can automatically maintain a preset distance from vehicles in front. Its active steering system keeps the C-Class in its own lane at up to 210km/h, and the lane recognition setup uses a 360° camera now to help keep it centred in the lane.

The traffic sign assistance system doesn’t stop at speed limits, but also recognises overhead gantries and roadworks signs, including those that operate only in set hours or when the road is wet.

Besides the usual array of airbags, the C-Class also has a centre airbag in the back of the driver’s seat to prevent head clashes.

It uses Pre-Safe technology from the S-Class to create a “virtual crumple zone” around the vehicle with the optional Impulse Side system, which moves the front occupants away from danger as soon as it’s detected.

The wheelbase is 25mm longer than the outgoing C-Class, which helps the ride (but so does having the entire car based on the S-Class’s architecture). This gives the C-Class a ride quality nothing else in the class can even approach.

One of the key steps is its rear-wheel steering, which turns the rear wheels by 2.5° either in the same direction as the front wheels (above 60km/h) or in the opposite direction (below 60km/h). 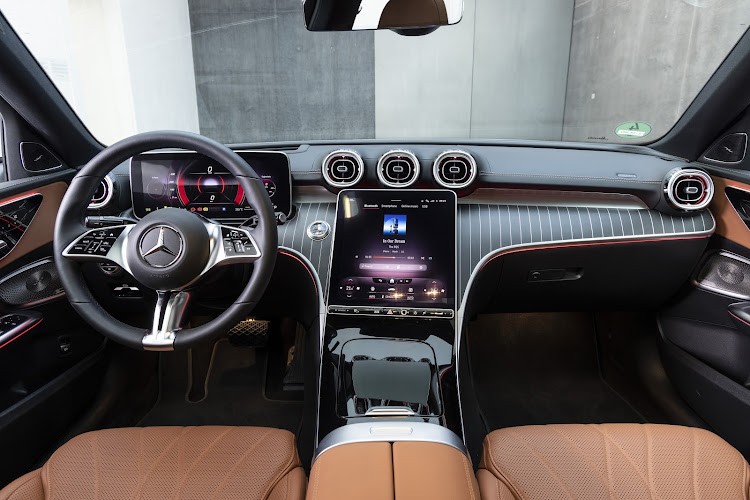 It’s in the voice-control that the C-Class has taken its greatest strides forward. Picture: SUPPLIED

All the engines now attach to the 15kW/200Nm integrated 48V starter generator (ISG), which delivers boost at low engine speeds and regenerates whenever the car slows down.

The C200’s four-cylinder, turbocharged, 1.5l engine is strong enough, with 150kW of power and its 250Nm of torque. The drive is to the rear, through a nine-speed automatic transmission.

The chassis is sublime, bordering on ethereal with its magical combination of ride, handling, silence and its ability to saturate its occupants in a feeling of Zen and self-worth.

It’s a remarkable change of direction for Mercedes-Benz, and it has finally turned the C-Class away from its move towards the overt 3-Series sportiness. It has turned it into a smaller S-Class instead which, as my drive at the car’s international launch in Germany will attest, was the right decision.

The steering is sharp and precise, without being giggly or vociferous about what's going on and the brakes are strong and reliable.

The interior is stunning, and not just the screens. The quality of every fitting shows Mercedes out-Audi-ing Audi, and the semifloating armrests set the tone for a sumptuous design feast inside.

The engine, though, isn’t the high-water mark for the C-Class.

The C200’s four-cylinder, turbocharged, 1.5l engine is a reasonable engine trapped in a great car, which makes it stand out for the wrong reasons.

It gets along fine, and a 7.3-second run to 100km/h and a 246km/h top end is just fine for this class. It’s just too coarse and sounds too strained to bother with hard acceleration for its own sake.

But, overall, if this is the new direction for Mercedes-Benz under Ola Kallenius, please give us more of it.

It’s just a cracking car. It’s a welcome throwback to the days where Mercedes-Benzes could easily punch out surprisingly high levels of grip and speed, but clearly delivered the richest part of their engineering in the kinds of driving people do more frequently.

Engines aside, it’s hard to imagine a single significant way in which Mercedes-Benz could have made the W206 C-Class better than it is.

The C-Class sedan will be launched in SA later this year and will again be produced locally by Mercedes-Benz SA after a R10bn investment in the East London plant.

Outsold by its peers, model fights back with updated infotainment and fuel-saving technology
Life
4 months ago
Next Article