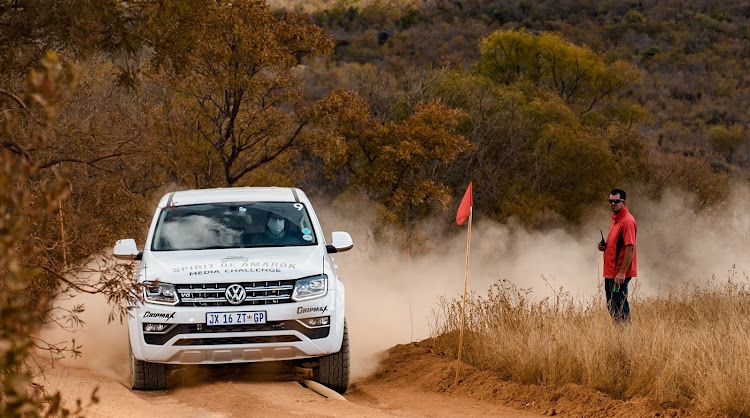 As someone with a penchant for off-road racing of any type, mine is a resoundingly poor record in the Volkswagen Spirit of Amarok challenge. I’ve done a lot of mental preps yet fortune has done precious little towards the wish to win, even if it’s only once.

This is probably my fourth, perhaps fifth stab at the competition and I’ve grown tired of hearing these words: “What happened Phuti? You were so close to winning it,” asked by Sarel van der Merwe, legendary driver and Spirit of Amarok organiser.

The media challenge is usually held right after the main public competition has concluded and it pits various automotive publications in a showdown of driving and mental aptitude.

It’s an interesting marketing and business model. VWSA has partnered with Sarel van der Merwe (a big drawcard) who goes around the country finding ideal spots to build dirt arenas which showcase the Amarok’s capabilities and the public pays a fee to take part and compete.

For the outlay participants get accommodation, three meals and an Amarok V6 TDI to use. The team that racks up the most points at the end of contest gets the trophy and the kudos.

This year’s media challenge gives me good vibes from the off. I’m paired with Top Gear’s Avon Middleton, an ace driver who was fresh from driving a full race-spec Dakar Rally bakkie in anger.

The new venue is in Limpopo, on a farm somewhere between Bela-Bela and the Indian Ocean, (that’s how remote it is) and unlike some of the venues in the past it’s free of treacherous soft dune sand stages and impossible steep inclines. 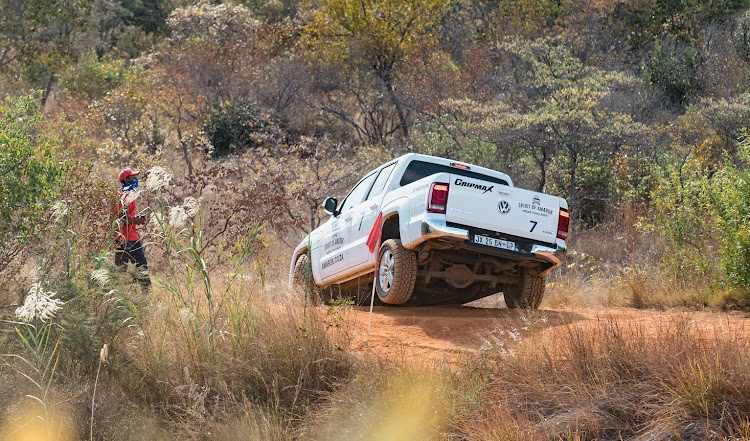 The technical sections are mostly done at crawling speeds and at times with wheels dangling in the air. Picture: SUPPLIED

There are enough speed and technical stages that require competitors to thread their Amaroks at speed without touching poles or up and down crevices, some requiring diff-lock activation, and all of them timed.

Much like in a regularity rally, stages are given a time bracket to start and to finish. Arrive too soon and you lose all points; arrive outside of the grace period and it’s the same fatal penalty.

We mess up the first challenge, which is a mild crawl down a small ravine. We touch not a single pole but cross the finish line too early, and all of a possible 100-points are lost in a flash. Gutted, we promise to never make that silly mistake but we are low on the score sheet.

We breeze through the next set of similar challenges, earning full points in one particularly stimulating section that saw all our rivals drop points.

Lunchtime scores reveal that we languish at the bottom. There are promises to keep it clean and tidy as we enter the second phase which is dominated by speed challenges.

It takes nerves of steel to carefully unleash the Amarok’s 190kW and 550Nm on sand paths lined with poles and trees, but we are off to a flying start, recording second, third, and sometimes fourth fastest times on these stages.

As dust clouds form on the field the competition is stiff and tense as rivals, careful not to lose points or bin the Amaroks in a ditch, maximise performance during the penultimate rounds.

In the end we clawed our way back from eight to finish fifth overall. The lost 100 points came back to haunt me when Supervan once more asked, “What happened Phuti, you were so close to winning it?”

New Ford Ranger to get tougher styling and more tech

New-generation one tonner will be locally built for SA and export as part of R15.8bn investment
Life
1 year ago