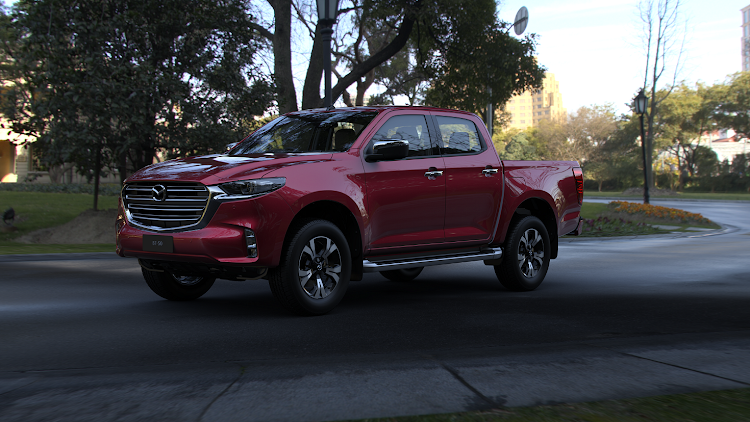 Styling of the new BT-50 bakkie is based on Mazda’s SUVs. Picture: SUPPLIED

Mazda Southern Africa is soon to unveil its all-new BT-50 bakkie range, replacing its long-in-tooth predecessor which has been around since 2006.

Boasting a fresh new design and the latest technology, Mazda’s one-tonner is designed to better take on the market-dominating Toyota Hilux and Ford Ranger in a popular segment that also includes rivals such as the Nissan Navara and Isuzu D-Max.

While the old BT-50 was based on the Ranger, the new one shares its underpinnings with the new Isuzu D-Max but has its own distinctive look reflecting the brand’s signature “Kodo-Soul of Motion” design language. The BT-50 was launched internationally in June 2020 and units sold in SA will be produced in Thailand.

With its new, SUV-like design the bakkie should appeal more to lifestyle customers while still expressing toughness and utilitarian functionality, says Mazda.

The modern new interior has been smartened up for a level of comfort on par with a luxury SUV, by combining sleek and modern elegance with strong functionality.

The latest BT-50 lays on a generous level of features, including an infotainment system with a 7 or 9 inch display screen, Apple Carplay and Android Auto, reverse camera, cruise control, parking sensors, and LED headlamps to name a few. On a safety level it has seven airbags and drive-assist items like hill launch assist, hill descent control, and trailer sway mitigation. 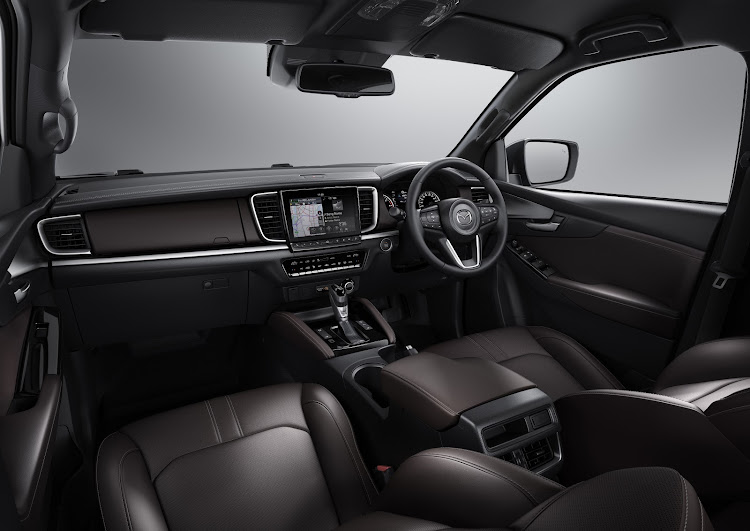 The smart new interior lays on a generous level of features. Picture: SUPPLIED

The model line-up will consist of three grades: Active, Dynamic and Individual, to align with Mazda’s passenger car range.

The Active model features a new 1.9l four cylinder turbo diesel engine with automatic or manual gearbox, producing 110kW of power and 350Nm of torque compared with the 110kW and 375Nm of the outgoing 2.2l unit.

The Dynamic and Individual versions are moved along by a new Isuzu-sourced four-cylinder 3.0l turbo diesel paired with a six-speed automatic. It puts out 140kW and 450Nm, versus the 147kW and 470Nm of the old five-cylinder 3.2l engine.

The Individual model gets a 4x4 drivetrain, whereas all other derivatives are 4x2s.

“The BT-50 has been reimagined and rebuilt from the ground up, with all the utilitarian value of a double-cab bakkie, and all the comfort and technology expected of an SUV,” says Craig Roberts, MD of Mazda Southern Africa.

Prices and full details will be announced on July 15. The new BT-50 will come standard with a three-year/unlimited kilometre warranty and service plan including roadside assistance.

Nissan Navara gets an upgrade and a price drop

Now locally built, the one tonner rides smoother and is easier on the pocket, writes Denis Droppa
Life
2 months ago

With 44 Ford Ranger models on sale, this one is a well-priced blend of work and leisure
Life
3 months ago

If you need a speedy bakkie with high-tech features, ask for the new 190kW Amarok V6 TDI, says Phuti Mpyane
Life
3 months ago
Next Article