Prototypes being tested on European roads emit only water vapour 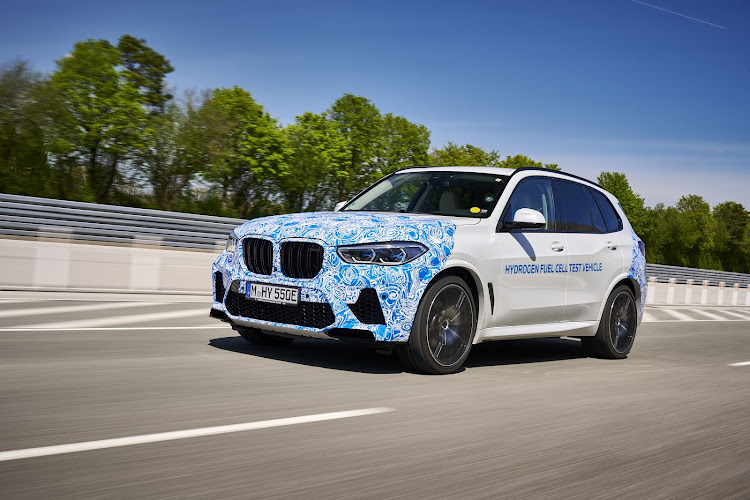 Production of small series of hydrogen fuel cell vehicles based on BMW's X5 will launch in 2022. Picture: SUPPLIED

While most carmakers are focusing their pollution-reducing efforts on electric vehicles, a few are looking to hydrogen as a replacement for fossil fuels in future cars.

This includes BMW, which has begun testing prototypes of its i Hydrogen NEXT fuel cell SUVs in Europe, ahead of its market launch next year. The prototype BMW X5s generate electric power in their fuel cells by combining hydrogen carried by the vehicle with oxygen in the air, with water vapour as the only emission. The hydrogen is stored in two 700-bar tanks made of carbon-fibre reinforced plastic (CFRP).

The main advantage of hydrogen cars is that they generally have a longer range than battery-electric cars and don’t need recharging; they are quickly refuelled at a hydrogen filling station in around the same time as filling up petrol or diesel cars.

However, fuel cell electric vehicles (FCEVs) are around double the average new car price, which is why only a handful of carmakers — including Toyota, Honda, Land Rover and BMW — are investing in the technology. Land Rover announced earlier this week that it was developing a prototype FCEV version of its Defender, with testing scheduled to begin this year.

BMW’s near-standard BMW i Hydrogen Next produces 275kW of power — about the same as a 3.0l petrol turbo engine — using fuel cells from a product development co-operation with Toyota. The vehicles are being tested in everyday conditions on European roads to see how effectively the CO2-free drive train, model-specific chassis technology and vehicle electronics systems work together under real-life conditions.

The testing programme will pave the way for a small-series model with this sustainable drive technology to go on sale in late 2022.

BMW says hydrogen fuel cells have the long-term potential to supplement internal combustion engines, plug-in hybrid systems and battery-electric vehicles. They could become an attractive alternative to battery-electric drive trains, especially for customers who do not have their own access to electric-charging infrastructure or who frequently drive long distances.

“Hydrogen fuel cell technology can be an attractive option for sustainable drive trains — especially in larger vehicle classes,” according to Frank Weber, member of the Board of Management of BMW AG responsible for Development.

Since 2018, the global number of FCEVs on the road has nearly doubled while hydrogen refuelling stations have increased by more than 20%, according to the International Energy Agency (IEA)

The Hydrogen Council predicts that by 2030, there could be 10-million FCEVs on the road with 10,000 refuelling stations worldwide.

The company will slash the number of combustion engine models in its line-up, sources say
Life
1 year ago

Electric cars are too expensive, but that could change with potential tax cuts and incentives
Life
1 year ago
Next Article