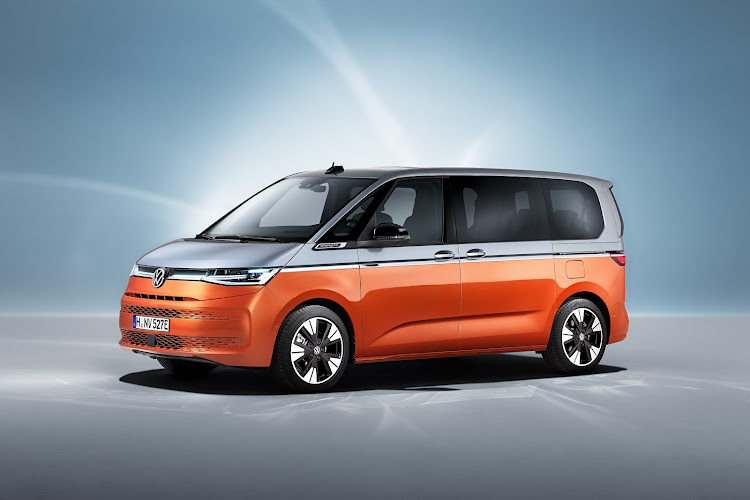 The new T7 takes on VW’s new styling cues as seen in its I.D. range of cars but is taking the two-tone scheme into the future. Picture: SUPPLIED

Volkswagen has released the latest T7 version of its Multivan.

The big news is that the new bus, which carries up to seven people, moves away from its commercial bones and is being built on the lighter, car-based MQB platform that underpins many of the Volkswagen Group’s ranges.

This has allowed for more flexibility and enabled Volkswagen for the first time to offer a top-line plug-in hybrid model with 160kW on tap.

The range will be made up of three pillars: the Multivan and Transporter 6.1 model lines, and the all-electric ID.BUZZ being launched in 2022. The T6.1 remains the specialist for commercial use and the basis of the California camper van.

There will be several powertrain options to choose from including three petrol engines with power ranging between 100kW and 150kW. A four-cylinder turbo diesel option will be added later. Most will be front-wheel drives and all models will be available exclusively with DSG automatic transmissions, with six speeds for the hybrid and seven for TSI models. The gear knob and handbrake are now gone to free up space.

The plug-in hybrid system in the range-topper has the vehicle starting by default on purely electric power for emissions-free driving.

It’s only at when the battery is nearly depleted or at speeds above 130km/h does the TSI petrol engine kick in.

Inside the 5,173mm long new bus is an interconnected display landscape equipped as standard with a digital instrument panel and head-up display. 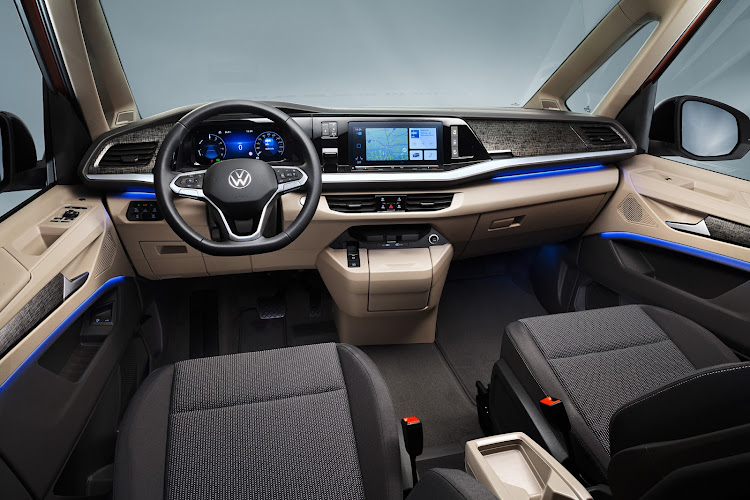 With its now lounge-like interior, the Multivan is also suitable as a high-class shuttle. Picture: SUPPLIED

Like the rest of modern Volkswagen ranges the Multivan gets App Connect for remote control of features like preheating or cooling the cabin but purely commercial derivatives also get integration with a digital logbook, a digital costs log and an automated maintenance management, and GPS tracking.

The new generation also debuts, parallel to the basic model, as an extended version with an even larger luggage compartment offering up to 4,053l.

The Multivan also debuts an optionally available two-part panoramic sunroof. There are adjustable and removable individual seats in the rear, and also a table with adjustable height, three cup holders and a storage bin.

For the first time, the enormous tailgate will have the option to be electrically operated with a new foot gesture as well. While the range gets LED lights as standard, LED Matrix Headlights can also be optionally ordered.

VW SA says there are no plans to bring in the T7 in the short term. Sales of the recently launched T6.1 will continue for now.