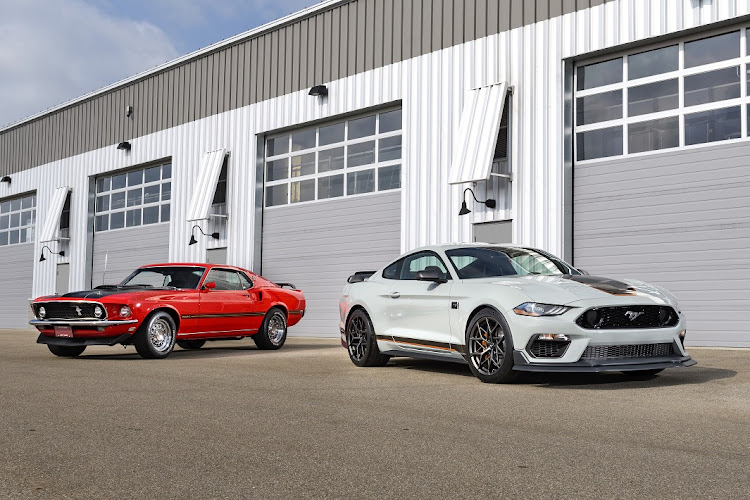 The Mustang Mach-1 (right) is limited to 90 units and harks back to the Mach-1 of 1969 (left) with unique equipment. Picture: SUPPLIED

The Ford Mustang range in SA will soon get a new and limited derivative in the form of the Mach 1 Fastback coupe.

Older fans of the brand will recall that the Mach 1 nameplate is not new to SA. The 1969 original and its 1972 facelift model were imported to this market during the 1970s.

The modern Mach 1 will be imported in 90 units, which is 40 more units than the gung-ho Ford Mustang Bullitt it’s based on. It shares the same 5.0l V8 engine with power outputs of 338kW (a 7kW boost above a standard Mustang GT) and an unchanged 529Nm of torque. Like the Bullitt, it can be optioned with a six-speed manual transmission or you can have it in 10-speed automatic guise.

It’s the Mustang with the best dynamic driving prowess thanks to a raft of Ford Performance parts derived from the Mustang Shelby GT350 and Shelby GT500 models.

It also gets the latest MagneRide adaptive suspension, new performance-orientated electric power steering calibration, stiffer sway bars and front springs, an upgraded brake booster, a rear subframe with stiffer bushings and a rear toe-link from the Shelby GT500, all of which are exploited with various drive modes including a track mode.

The car sits on unique design 19-inch five-spoke dark-painted aluminium wheels said to mimic those of the classic Mach 1 Magnum 500. The alloys are shod with mixed-size 255/40R19 rubber in front and 275/40R19 at the rear.

Visually, the Mach 1 is identifiable as a special, track-focused machine — most notably by the bold Mach 1 grille that pays tribute to the original, along with extensive use of low-gloss dark grey and black accents.

Differentiators from other Mustangs extend to a rear spoiler that generates 22% more downforce, a lower diffuser from the Shelby GT500, a satin black bonnet, side stripes with orange accents, and orange-painted brake calipers, Mach 1 badging, and metallic fighter-jet grey paint.

“The Mustang has achieved legendary status as a performance icon around the world, and in SA too,” says Doreen Mashinini, GM for marketing at Ford SA. “The remarkable success of the Mustang Bullitt proved that South Africans have an appetite for exclusive, limited-edition models, and we are proud to extend the Mustang’s rich heritage with the launch of the Mach 1.”

Launch timing and pricing for the Mustang Mach 1 in SA will be confirmed at a later stage.

Keeping cars in the pink with luxurious wraps

To celebrate Heritage month, Denis Droppa takes a look back at some iconic made-in-SA cars
Life
8 months ago
Next Article

New Honda Jazz to be reborn as the Fit in SA

New Honda Jazz to be reborn as the Fit in SA