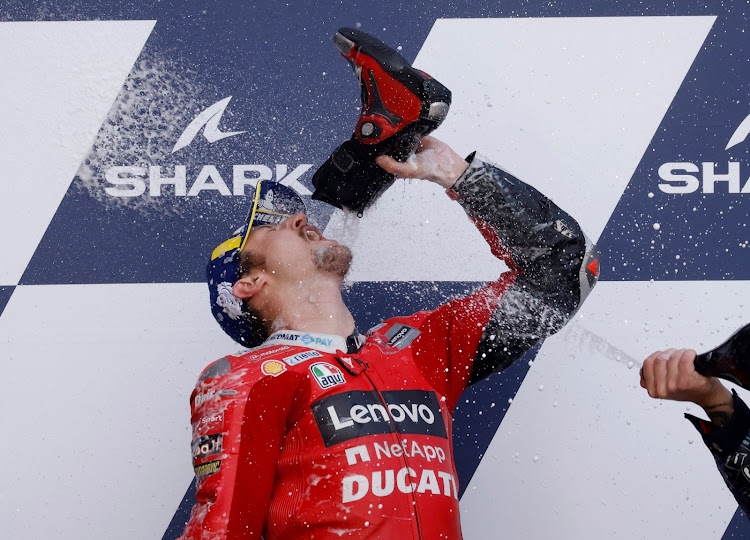 Le Mans — Ducati’s Jack Miller held his nerve in a crash-filled MotoGP race in wet and windy conditions to win the French Grand Prix on Sunday, with the Australian finishing ahead of local hopes Johann Zarco (Ducati) and Fabio Quartararo (Yamaha).

It was Miller’s second consecutive victory after his success in the Spanish Grand Prix earlier this month, making him the first Australian to seal back-to-back premier class wins since Casey Stoner in 2012.

Quartararo reclaimed the championship lead and sits on 80 points, a point ahead of Ducati’s Italian Francesco Bagnaia, who came fourth in Sunday’s race, with Zarco (68) in third overall.

In chaotic scenes at the Bugatti Circuit after a spell of heavy rain, a number of riders including defending champion Joan Mir (Suzuki), six-times champion Marc Marquez (Honda), Miguel Oliveira (KTM) and Alex Rins (Suzuki) failed to finish the race.

Miller, who started third on the grid, won despite a double long-lap penalty for speeding in the pit lane after early rain forced riders to swap their bikes in what would be the first flag-to-flag Grand Prix since Brno in 2017.

“It was very hectic,” Miller said in a postrace interview. “It was perfectly still pretty much just before … but when the rain and the wind came as I came down pit road the barrier blew into pit lane and I said: ‘They’re going to red-flag this.’

“But then it dropped off relatively quick … the first couple of laps were real dodgy on the wet tyres. But I had to get going and then I had the penalties … I generally do get speeding tickets here in France.

“But I was able to bosh them out pretty quickly and get to work on Fabio. I got in front of him and I felt comfortable. I was just riding to the conditions … Absolutely amazing. I can’t believe it. Back-to-back wins like this, it’s just fantastic.”