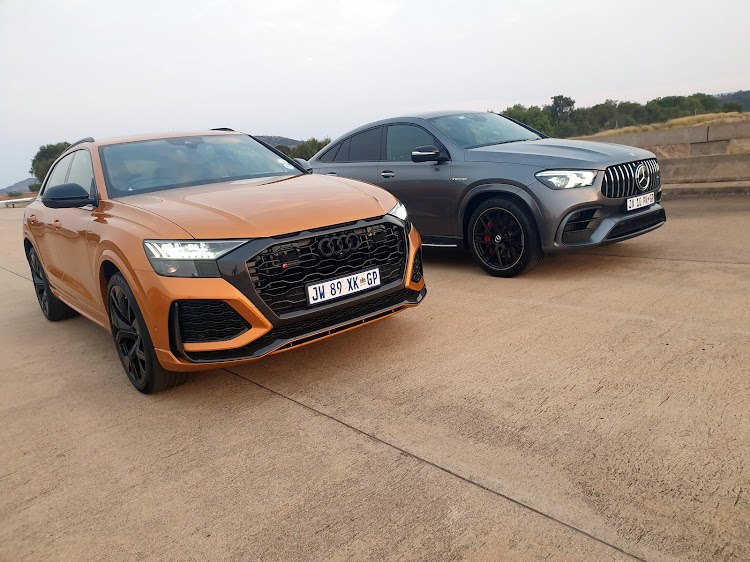 Call them sports cars on stilts or super SUVs, high-riding heavies with monstrous engines are becoming ever more popular with HNWIs. These vehicles are a recent phenomenon in the high-horsepower league, boasting fiery performance once reserved for low-slung supercars, while also catering to many buyers’ insatiable desire to sit a few centimetres higher.

Two of the latest super SUVs to be launched in SA are the Mercedes-AMG GLE 63S Coupe and the Audi RSQ8.

These German high-performance hefalumps have heart-pumping performance, raunchy roars and theoretically some offroad ability if you wish to test the mettle of their low-profile tyres on rocky trails.

We instead kept this pair of Teutons on the tar where they’re most likely to spend most of their working lives, which included a trip to the Gerotek testing centre near Pretoria to see how they stacked up in straight line and cornering performance. But first, a quick recap of where they fit into the super-SUV universe:

As flagship of Mercedes’ large SUV-coupé range, the GLE 63 S wields an electrified 4.0l V8 biturbo engine generating a burly 450kW and 850Nm, with temporary additional spurts of 16kW and 250Nm provided by the EQ Boost starter-generator. It lays it all down via a nine-speed auto and permanent all-wheel drive. 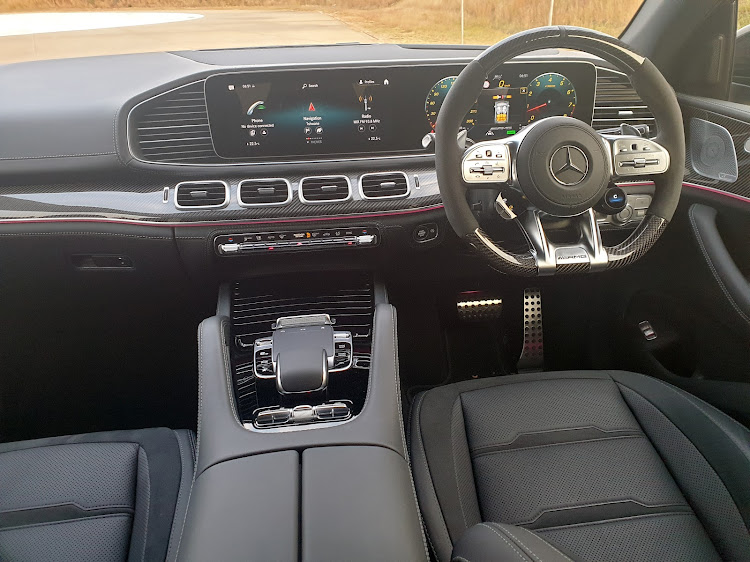 The MBUX infotainment system in the Mercedes has AMG-specific displays. Picture: DENIS DROPPA

It rides on height-adjustable air suspension that’s adaptable from soft to stiff at the press of a button, and there are modes that turn the vehicle from easy-going commuter to a fire-breathing dragon.

The four-door coupé has a fastback-style roofline and sells for R2,970,920, while the vehicle’s also available in a more traditional SUV shape for R2,907,440.

The Audi bears the title of SUV king of the Nurburgring, having lapped the German circuit in seven minutes and 42.2 seconds in November 2019. The vehicle it unseated by seven seconds was the Mercedes-AMG GLC 63 S, the smaller brother of the GLE on test here (which hasn’t set an official Nurburgring laptime).

Built on the same platform as the Lamborghini Urus, the RSQ8 is the new halo model of Audi’s crossover SUV range. Power comes from a 4.0l twin-turbo V8 with outputs of 441kW and 800Nm. To save fuel the engine features cylinder deactivation, as well as mild-hybrid system. 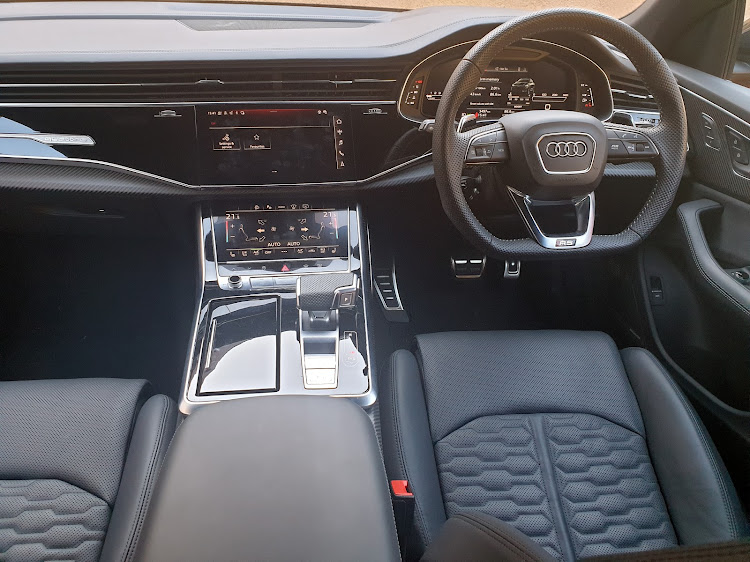 It’s all digitised tech and high luxury, but we’re not fans of the Audi’s haptic feedback touchscreen. Picture: DENIS DROPPA

It has various mild-to-wild driving modes, including individually programmable modes that can be quick-accessed by a button on the steering wheel.

The RSQ8 is the more overtly showy of the two, especially in the test car’s optional dragon orange paint job and blacked-out Audi badge on a black grille. It was the clear winner in terms of head-turning, selfie-snapping appeal wherever we drove.

However, the Benz is no shrinking violet with its bonnet power domes and vertically louvred “Panamerica” grille in high-gloss chrome which bears one of the largest Mercedes badges we’ve seen.

Both cars have black alloy wheels to drive home their visual aggression, 23-inch versions for the Audi and 22-inches for the Benz.

The RSQ8’s interior gets typical Audi Sport décor like sports seats clad in Nappa and Alcantara, a flat-bottom steering wheel and RS logos.

Audi’s haptic touchscreen controls are a turn-off, however; they require a harder press than a regular touchscreen but without providing enough of a distinct button-like click as intended.

The Audi is slightly longer than the Benz and has better interior leg room, but there’s no shortage of space inside the GLE which is also very roomy under its curvy coupé-like roof.

The hi-tech MBUX infotainment system comes standard in the Benz and contains AMG-specific content. A widescreen cockpit combines the instrument cluster and touchscreen multimedia display into one unit.

The Mercedes has a slightly larger boot but both cars have impressive luggage space at more than 600l. The key difference is that the Benz boot contains a space-saver spare tyre where the Audi has only a mobility kit with an inflator; this became an issue when the RSQ8 suffered an unrepairable puncture and we had to wait several hours for the Audi cavalry to bring us a replacement 23-inch wheel.

Both vehicles are restricted to 250km/h top speeds, or optionally 280km/h. Those figures are largely academic unless you have access to the German autobahn, or a very good lawyer.

In acceleration it’s neck and neck with both vehicles claiming a 0-100km/h time of 3.8 seconds at sea level. Tested with a Vbox at Gauteng altitude, the Audi had a slight advantage (4.0 secs vs 4.2 secs) while they posted identical 60-120km/h overtaking times of 3.3 seconds.

Four-second 0-100 times were until fairly recently the preserve of lightweight supercars, and it’s quite mind-blowing for behemoths weighing around 2.4-tons to achieve them.

These speed feats are accompanied by a high-decibel bombardment of V8 vocality, and these loud and raunchy cars are not in touch with their sensitive sides.

The Benz is probably is the wilder of the two cars in the most angry of its driving modes, with more intensity and a truly Jurassic roar. The Audi’s not far behind though.

Stoking those fires isn’t friendly to fuel budgets, and it takes much driving restraint to keep fuel consumption under 19l/100km in both these vehicles.

Adaptive air suspension gives these contenders a best-of-both-worlds combo of ride and handling. In terms of ride quality there’s little to choose between the Audi and Mercedes, and both SUVs display impressive waftability in their cushiest suspension settings.

True sports cars they’ll never be as they’re simply too heavy, but for bloated SUVs they handle better than expected. With suspensions stiffened up in sport mode they get through fast corners without excessive body roll, their rear-biased all-wheel drive systems prevent early understeer, and their electronic rear differentials allow you to punch the throttle earlier in corners.

The RSQ8 is slightly more sprightly through the bends due to being about 50kg lighter, and it also has the advantage of a four-wheel steering system that makes its initial turn-in sharper.

Getting on the power early in the Mercedes is thwarted by a sensitive stability control system that seemingly cannot be completely disabled. 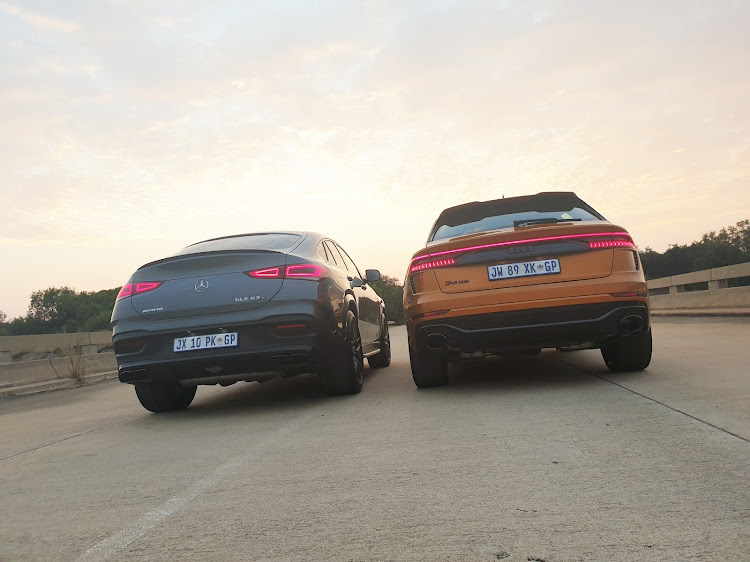 Thunderous V8 roars exit through four tailpipes in the Benz and two in the Audi. Picture: DENIS DROPPA

These two steroid-pumped SUVs are close in terms of performance, technology and as flamboyant displays of wealth.

The purchasing decision will likely be on mostly brand-loyal lines, and whether your heart is with Stuttgart or Ingolstadt you’ll be acquiring a fearsomely fast luxury SUV with all the modern tech and safety, that raises a middle finger to subtlety or the concept of a low CO2 footprint.

For those of a more neutral disposition there’s no doubt  the car with the four rings is the high-performance bargain here. At a more than R600k saving over its rival, and its Nurburgring-taming reputation, the Audi RSQ8 is right on the money. 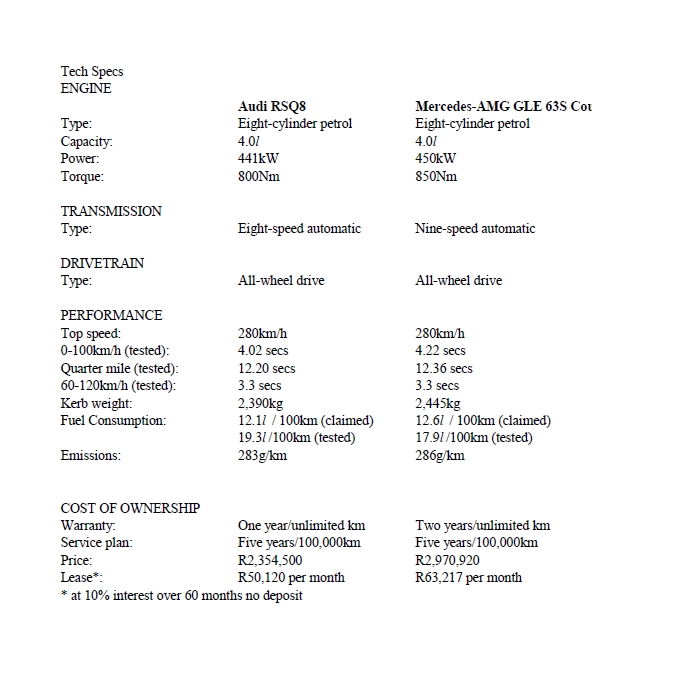 VERDICT: A true AMG experience in a higher sitting position

The burly SUV is a combination of extravagance, practicality and furious performance
Life
3 months ago

The Trackhawk is a street-brawling Jeep

The world’s most powerful SUV is in need of some anger management, writes Denis Droppa
Life
1 year ago
Next Article